Mumbai: The fortunes of Maruti Suzuki India Ltd, India’s largest carmaker by sales, are inextricably linked to the yen.

An analysis of the company’s average net profit margins over the past 11 years shows that the Japanese currency has been one of the most important variables in company’s profitability.

In quarters when the yen has weakened, and consequently the rupee strengthened, Maruti’s profit soared. The converse is equally true.

This correlation, which has played out over the last several years, was most pronounced in the three months ended March. During the quarter, the yen weakened considerably. On average, during the quarter, every ¥100 bought ₹ 52.20. In the year-ago quarter, ¥100 bought ₹ 60.10. In response, the company’s net profit margin widened to 9.43% to against 6.63% a year ago. 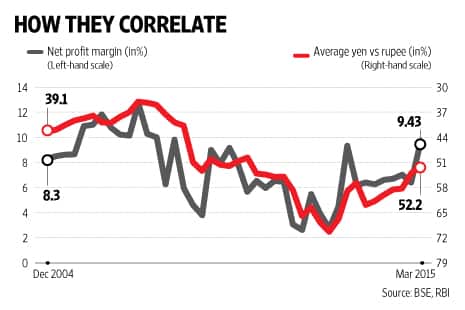 Driven by a favourable exchange rate and other factors including higher volumes, better price realisation and cheaper raw materials, Maruti’s net profit zoomed by a record 61% to ₹ 1,284 crore while net sales expanded 12.3% to ₹ 13,272.60 crore from a year ago.

Maruti’s exposure to the yen is in the form of royalty it pays to the parent Suzuki Motor Co, and the import of raw materials. For fiscal 2014-15, Maruti’s imports were 16% of its net sales while royalty as a percentage to sales was 5.7%, Ajay Seth, chief financial officer, said in an earnings call after the fourth quarter results.

The adverse impact of the co-relation is not lost on the company. It has been working towards reducing the yen exposure by cutting down on imports –both at its end and at the vendor’s. Over the last four to five years, the company’s yen exposure as percentage of net sales has reduced to 22% from 30%, said an analysts at a domestic brokerage who didn’t want to be named. To be sure, the company needs to accelerate the effort.

Over the past decade, there have been several structural shifts in the company ranging from the formation of a new company called Suzuki Powertrain India Ltd and its subsequent merger, changes in geographic mix of export destinations and changes in the way royalty is calculated, said an analyst declining to be identified.

“However, despite all these, the margins continue to be closely intertwined with the yen. This indicates the company has not been able to pull itself out from the dependency on the currency," he said.