Earnings before interest, tax depreciation and amortization (Ebitda) is likely to rise to ₹ 85,000 crore in the current year, said V. Srikanth, joint chief financial officer, RIL. “In FY18, we were at ₹ 72,000 crore and FY19 (annualizing what we have done thus far) we are close to ₹ 85,000 crore. We are talking about businesses where Ebitda has been doubling and tripling. As you know, consumer businesses (retail and telecom) can sustain long trends of increases," he said. 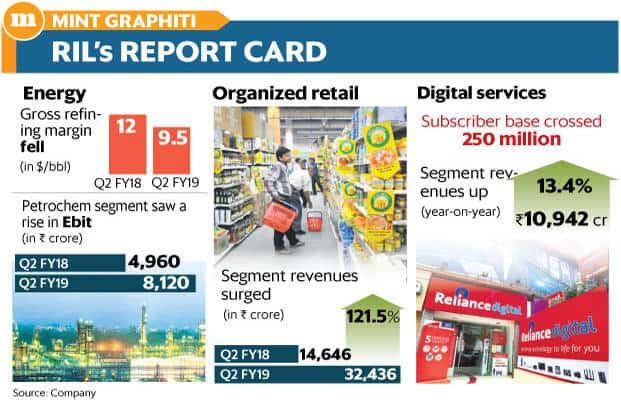 The Mukesh Ambani-controlled RIL has invested more than $30 billion over the last five years across its refining, chemicals, retail and telecom businesses to boost capacity.

RIL on Friday said its net profit rose 17.4% to ₹ 9,516 crore in the September quarter (Q2), led by higher price realizations for petrochemicals and refinery products.

Quarterly revenue at the energy-to-telecom conglomerate rose 55% to ₹ 1.56 trillion from ₹ 1.10 trillion in the year earlier.

RIL’s consolidated net sales were expected to come in at ₹ 1.41 trillion, according to a Bloomberg poll of seven analysts. Net profit was estimated at ₹ 9,630.20 crore, according to 10 analyst estimates.

Gross refining margin (GRM), or what the company earns from turning every barrel of crude oil into fuel, came in at $9.5 a barrel. RIL’s refining margin dropped below $10 for the first time after 15 quarters. Analysts had expected RIL’s GRM to be in the range of $10-10.5/barrel against the $12/barrel it reported a year ago.

RIL is the operator of the world’s biggest oil refinery complex, with a capacity of 1.24 million barrels of oil per day, at Jamnagar in Gujarat.

During the quarter, the benchmark Singapore Complex GRM rose from $6 to $6.2, led mainly by higher fuel oil cracks. RIL, however, does not produce fuel oil.

Crude oil price continued its upward trend in the September quarter. Average Brent crude price rose 45% from a year earlier and 1% from the preceding three months at $75 a barrel.

For Q2, revenue from the petrochemicals segment jumped 56.2% to ₹ 43,745 crore, helped by an increase in volumes and price realizations.

Its mobile telephony arm, Reliance Jio Infocomm Ltd, reported a profit of ₹ 681 crore for the September quarter, a rise of 11.3% from ₹ 612 crore in the preceding three months. Revenue from operations rose to ₹ 9,240 crore from ₹ 8,109 crore.

During the September quarter, Reliance Jio added 37 million customers, taking the total customer base to 252.3 million.

Its monthly average revenue per user (arpu) stood at ₹ 131.7 per subscriber in the quarter. Bharti Airtel, which was the market leader before the Vodafone-Idea merger, reported an arpu of ₹ 105 per subscriber per month during the June quarter.

Bharti Airtel, which hasn’t reported its earnings for the September quarter, has seen its arpu decline sharply during the past few quarters as a result of pricing pressures in the sector due to price wars.

“We, at Jio, are glad with our progress towards our mission with more than 250 million subscribers on our network within 25 months of commencement of services," Ambani said. “Our next generation FTTH (fibre-to-the-home) and enterprise services are now being made available to our customers to further enhance our value proposition to our customers."

The maximum investment in Den and Hathway, including open offers, is likely to be around ₹ 7,900 crore. RIL will also absorb ₹ 1,400 crore worth of debt from Hathway, said Anshuman Thakur, head of strategy and planning for Reliance Jio.