InterGlobe Aviation to sell 10% of its equity in largest IPO by an Indian airline; Infibeam also files to go public

Mumbai: InterGlobe Aviation Ltd, which runs India’s largest airline by market share IndiGo, and its existing investors plan to sell around 10% of its equity to raise around ₹ 2,500 crore, the company said on Tuesday, less than a week after Coffee Day Enterprises Ltd, operator of the coffee chain Café Coffee Day, announced plans to raise ₹ 1,150 crore, in share sales that could presage a revival of the initial public offering (IPO) market.

In its filing to stock market regulator Securities and Exchange Board of India, InterGlobe, founded by low-profile travel and aviation services entrepreneur Rahul Bhatia and Rakesh Gangwal, a former chief executive of US Airways, said it will issue fresh shares worth ₹ 1,272.20 crore and that some existing shareholders will sell up to 30.146 million shares for around the same value.

The share sale will raise ₹ 2,500 crore, making it the largest IPO by an Indian airline.

IndiGo president Aditya Ghosh confirmed that the airline had filed a prospectus, but did not divulge details.

IndiGo, also India’s largest no-frills airline, has been the only profitable Indian carrier for the past seven years, winning a reputation for its service quality and on-time performance in an industry characterized by debt and accumulated losses.

“IndiGo’s IPO will be the first big listing after Jet Airways’ 2005 IPO. I expect IndiGo’s IPO to bring retail investors back to the airline sector. Airline IPOs since 1990s have hurt investors, especially small investors, significantly, and IndiGo’s IPO is expected to restore confidence," Kaul said.

Jet Airways (India) Ltd, then India’s largest private airline, raised ₹ 1,900 crore in its 2005 IPO. The carrier, which is part- owned by Etihad Airways PJSC, now has a market capitalization of $494 million while SpiceJet Ltd is valued at $172 million.

A raft of new share sales could spark a revival of the IPO market, which has seen seven companies raise a combined ₹ 3,449.10 from the stock market year-to-date.

Media reports have said GVK Power and Infrastructure Ltd could file documents for a share sale of around $250 million for its airport unit that runs the Bengaluru and Mumbai airports. 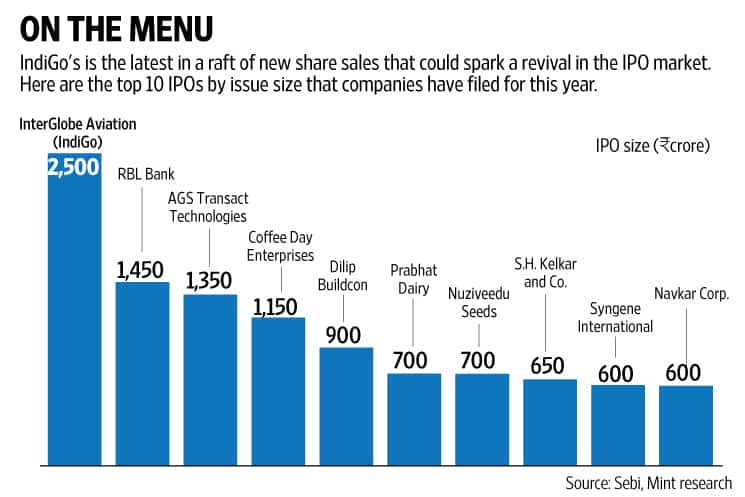 On Tuesday, online shopping platform Infibeam filed with Sebi to raise an estimated ₹ 450 crore through an IPO, becoming the first e-commerce firm to tap the IPO route.

Both Indigo and Coffee Day are very recognizable brands that cater to a large number of customers.

Still, some analysts are wary about the timing of the IPOs, which will also serve as a test of investor appetite for the Indian consumption story.

“If the markets correct sharply due to Greece crisis as well as domestic political heat, it’s just not the IndiGo IPO, the other big-ticket IPOs too will get affected as the mood in the IPO market sentiment is directly dependent on the secondary market," said Ambareesh Baliga, an independent market analyst.

“If the markets continue to hold then possibly IndiGo could get a good response as it is dubbed the only highly profitable airline, but one needs to look at the fine print in the prospectus to understand how they are able to achieve what other listed players have been unable to in the last so many years," Baliga said.

That wasn’t to be, largely because of regulatory uncertainties (especially regarding tax laws) that have dented investor confidence, and concerns over the economy and the earnings of companies.

While some investors, including commodities trading guru and hedge fund manager Jim Rogers have been scathing of the government—he said in an April interview that this government was long on talk and short on delivery—others, such as CLSA economist Rajeev Malik have said the government is doing the right thing by focusing on the building blocks of a recovery.

IndiGo said in a statement that proceeds from the sale of new shares would be used to retire some outstanding lease liabilities and fund the acquisition of aircraft and the purchase of ground support equipment.

According to its share sale prospectus, IndiGo will use ₹ 1,165.66 crore to retire liabilities and acquire aircraft. It will spend ₹ 33.36 crore for equipment acquisition.

Some existing investors will also cash out.

As of 31 December, 2014, IndiGo had total capital commitments of ₹ 58,794.49 crore, which principally relate to the airline’s aircraft purchase obligations under its 2011 agreement with Airbus SAS.