Mumbai: Thousands of suburban Mumbai residents face either a powerblack out or a massive hike in power tariff due to a row between Tata Power Co. Ltd and Reliance Infrastructure Ltd over the sale of electricity at regulated rates. 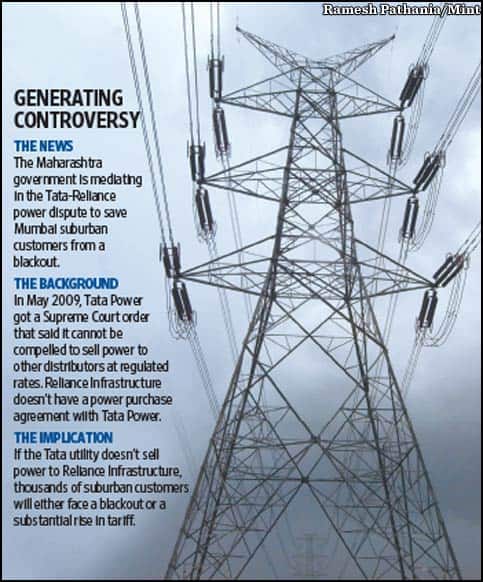 But Reliance Infrastructure, part of the Reliance-Anil Dhirubhai Ambani Group, argues that such a move will force it to buy electricity at market rates and, consequently, raise tariffs.

The dispute is being fought against the backdrop of a revolutionary move in the Indian power market—of individual customers being allowed to choose their power supplier. Currently, this is only possible in Mumbai. Interestingly, one reason why Tata Power’s base of customers is growing is because it already charges a lower rate than Reliance Infrastructure, prompting some of the latter’s customers to move to the former.

Tata Power currently has 1,877MW of electricity flowing through its grid. It sells 832 MW to Brihanmumbai Electric Supply and Transport Undertaking (BEST), the municipal distribution company, 487MW to its own distribution company and 500 MW to Reliance Infrastructure, all at regulated rates.

The row started after Tata Power said last year it would stop supply to Reliance Infrastructure from 1 April 2010, citing a May 2009 Supreme Court order that it cannot be compelled to sell to other distributors at regulated rates.

The state government has requested Tata Power not to stop the supply until the dispute is resolved. It has also set up a panel comprising principal secretaries from the energy, law and justice departments, the managing director of Maharashtra State Electricity Distribution Co. Ltd (Mahavitaran) and the secretary of Maharashtra Electricity Regulatory Commission (MERC) to mediate between the two firms.

S. Padmanabhan, executive director of operations, Tata Power, said his company has added 30,000 customers previously served by Reliance Infrastructure since October, and that it currently adds 500 such customers every day.

“We need adequate power supply to cater to these customers. Anticipating this change, we have signed up for another 160MW (for 2010-11), but what we are realizing now is that we underestimated this changeover. If the same pace of change continues, we will cross that 160MW by March 2011," Padmanabhan added.

The difference is because Reliance Infrastructure has to buy 450MW out of its total need of 1,450MW through the open market, at a higher rate.

As a result, Tata Power expects its customer base to more than triple to “1-1.5 lakh in the next one year", Padmanabhan said.

According to a proposal pending with the regulator, MERC, Tata Power plans to allocate 100 MW more to BEST in 2010-11 and 160 MW more to its own distribution company at regulated rates. It plans to give the remaining 200 MW to its trading company with a mandate of selling it to the state of Maharashtra.

Padmanabhan added that the firm was ready to sell to Reliance Infrastructure at the market price, but only for the short term.

“This year we will manage with the additional 160 MW, but if the current trend continues, by mid-2012 (the extra) 200 MW will be utilized completely. Even we have to make arrangement for an additional 70-80 MW then. So anyway, whatever the committee says it will only be a short-term solution, even if it (the supply to Reliance Infrastructure) is at market rates," he said.

That doesn’t seem to be Reliance Infrastructure’s stand.

A Reliance Infrastructure executive, speaking on condition of anonymity, said that Tata Power’s stand went against the national tariff policy.

“Tata should supply power to surburban consumers at a regulated rate because the national tariff policy says that the customer has a legitimate right to regulated power.

“Also, if we buy power from the open market, it will cost us an additional Rs600-700 crore, which will be an unwaranted burden on customers," this person added.

Rupesh Sankhe, equity analyst with Angel Broking Ltd, said Tata Power had the upper hand in the spat, given that it had a favourable apex court order and that Reliance Infrastructure had not signed a long-term agreement for power supply.

“But because this is a question about a large number of consumers," Sankhe said, “the government may try to find an acceptable solution to both parties."