New Delhi: Jet Airways (India) Ltd, whose shares plunged more than 13% on Friday, has been asked by stock exchanges why its audit committee did not approve financial results for the quarter ended June 30 at a board meeting the previous day.

The carrier controlled by Naresh Goyal has also been asked by the BSE and the National Stock Exchange (NSE) whether any matter other than earnings was discussed during the meeting.

The exchanges asked the carrier when the adjourned board meeting would now be held.

A fresh date for the meeting will be declared in due course, said a spokesman for Jet Airways, who spoke on condition of anonymity.

“As per your announcement dated August 9, it was stated that there are certain matters which have been not closed. Kindly state us the details of these matters," NSE asked the company in a message posted on the exchange’s website.

Meanwhile, BSE asked Jet Airways to disclose the matters pending closure, as well as whether any matter other than results was on the agenda which merited disclosure to stock exchanges under listing regulations. 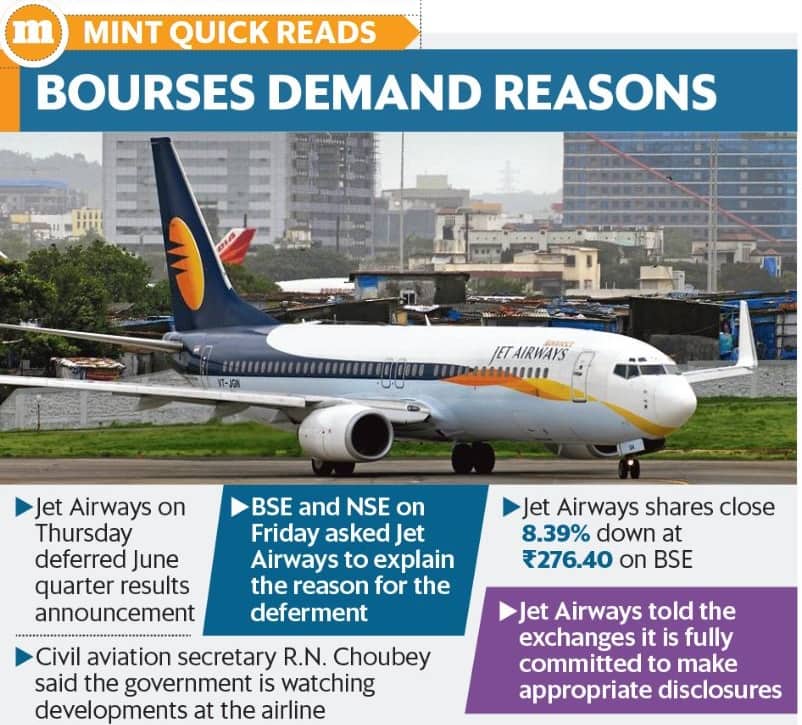 “If so, why have the same not been submitted?" it asked.

Jet Airways late on Thursday said it has deferred publication of June quarter results as certain matters were still to be closed.

The audit committee did not recommend the quarterly results to the board for its approval, the company had said.

Jet Airways also told the exchanges that the term of its audit committee chairman Srinivasan Vishvanathan, an independent director on the board, expired at the conclusion of the board meeting. “Accordingly, he has ceased to be a director on the board of the company with effect from that date," it said.

Higher fuel prices and intense competition has been affecting airlines. Jet Airways posted a net loss of ₹ 1,036 crore in the March quarter that erased profits from the first three quarters.

However, Jet Airways is not the only airline that is facing financial problems. InterGlobe Aviation Ltd’s IndiGo, the largest airline by marketshare, posted a 97% drop in June quarter profit, its worst quarterly performance.

The company made a net loss of ₹ 767 crore in the last financial year as spending, mainly fuel costs, employee benefits and distribution expenses, overshot revenue.

Jet Airways is implementing cost-cutting steps including of wages as higher fuel price and intense competition that has crippled airlines’ ability to raise fares without losing market share. It has plans to cut non-fuel costs by up to 15% over the next few months.