The appellate bankruptcy tribunal also permitted RCom and its Joint Lenders’ Forum (JLF) headed by State Bank of India (SBI) to “sell the mortgaged assets" of RCom to Mukesh Ambani owned Reliance Jio Infocomm Ltd, and deposit the money with the banks.

“Taking into consideration the fact that if the corporate insolvency resolution process continues, both financial creditors as well as operational creditors will suffer...and prima facie case has been made out...the impugned order (passed by National Company Law Tribunal’s Mumbai Bench kick-starting the insolvency process for RCom) is stayed.", justice S.J. Mukhopadhyay said.

A two-judge NCLAT bench headed by Mukhopadhyay, however, made it clear that in case the agreed amount is not paid to Ericsson within 120 days starting 1 June, the appellate tribunal may revive the insolvency process against RCom.

Under such a circumstance, the proceeds of the sale of the mortgaged property would go back to RCom. 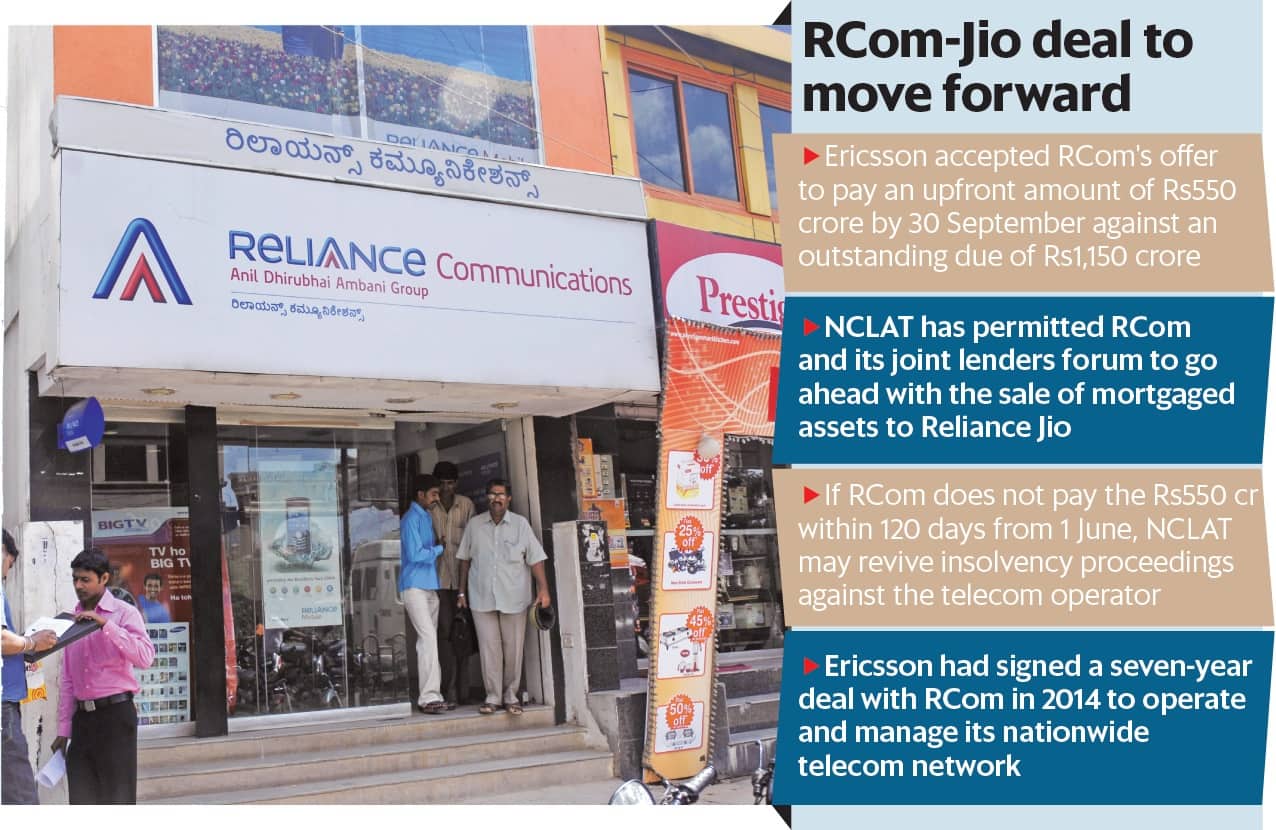 “Let this deal (with Reliance Jio) go through.. Their (Ericsson’s) claim would still be alive," RCom’s counsel Kapil Sibal submitted before the NCLAT, arguing that the initiation of insolvency would result in huge “hair-cuts" for the banks as well as Ericsson. The settlement between RCom and Ericsson was reached a day after the appellate tribunal urged the parties to “settle the dispute" on unpaid dues, while hearing an appeal by RCom through a shareholder , against the order of Mumbai bench of NCLT which initiated insolvency proceedings against it on a plea made by Ericsson for recovery of unpaid dues of over Rs1,150 crore.

Ericsson had signed a seven-year deal with RCom in 2014 to operate and manage its nationwide telecom network. After non-payment of dues since 2016, Ericsson moved NCLT under the Insolvency and Bankruptcy Code against RCom and its two subsidiaries Reliance Infratel and Reliance Telecom in September 2017. With the insolvency process stayed, RCom can now go ahead with its Rs18,100-crore deal with Mukesh Ambani’s Reliance Jio for the sale of its assets mortgaged with different banks to bring down debt.

Counsel appearing for the JLF informed NCLAT that as per the agreement with RCom, the lenders expected to get a total of Rs37,000 crore through the sale of mortgaged assets and through other debt resolution plans by July 2018.

Part of the deal with respect to the stay on sale of tower and fibre assets was cleared by the appellate tribunal on 29 May after Reliance Infratel’s offshore investors and minority shareholder HSBC Daisy Investments (Mauritius) Ltd decided to withdraw their objections to the sale. A stay imposed by the Bombay high court on the sale of the other assets i.e. spectrum, media convergence nodes (MCN) and real estate (at New Delhi, Chennai, Kolkata, Jigni and Tirupati) was vacated by the Supreme Court on 5 April. RCom and its subsidiaries have total outstanding debt of Rs45,000 crore. The matter will be next heard by the appellate tribunal on 3 October.