New Delhi: Simar Sukhija grew up in a beauty salon.

“She’d sit and chat with the customers and stir up the wax and powder like a cake mix," says her mother, owner of the parlour in question: Looks, in New Friends Colony.

Now she watches her grown-up daughter bustling about at the opening of the newest branch of her own venture, Simar’s Nail Bar. The basement parlour in Punjabi Bagh’s central market, which offers manicures, pedicures, hand and foot massages as well as its signature service—acrylic nail extensions—claims to be India’s largest nail bar.

That it has space for just seven clients at a time indicates quite how novel the idea of a nail bar still is in India although these are ubiquitous in the big cities of the world, from New York to London to Hong Kong, where they typically operate out of quick-stop booths, attending on working women seeking a quick manicure or a “filler" of their acrylic extensions during lunch breaks.

Sukhija may have cracked a winning formula that has put her ahead of her rivals in a relatively short time—her first nail bar was started from her mother’s salon in 2000. To Sukhija, however, it seems as though the idea had been brewing for much longer.

“I was born with the idea," she says, nodding earnestly. “I always wanted to open a stand-alone nail bar. Of course, at the time I had no idea of nail extensions, but I always had this plan. Nail care is so important. You can tell what a person is like by looking at their hands and feet." As she speaks, Sukhija brandishes her own perfectly manicured acrylic talons, painted with little raised flowers in blue and white that stick up from the surface like icing on a cake. 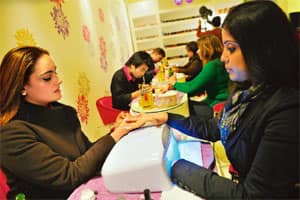 Clearly, this is a happy state of affairs for Sukhija, who admits that it wasn’t always so easy to convince women to pay high prices for something they hadn’t heard of before.

For the uninitiated, nail extensions are thin sheets of plastic that fit over the end of a real nail and are then painted over with acrylic or gel to create a false and very resilient surface that lasts several months. The result is long, slightly thick-looking nails that don’t chip and that can be painted with a variety of complicated, gaudy designs or the simple pink-and-white French manicure favoured by working women.

“Initially, I went to a lot of trouble explaining to women that we make nails on top of nails and we charge ₹ 3,000 for it," says Sukhija with a frank smile. “Women used to look at me as if thinking, ‘Okay, you are going to charge ₹ 3,000 for what?’ They were very hesitant, but when they got it done, they knew what I was talking about. I’m so glad I became a trendsetter."

According to Sukhija, the typical Delhi woman is not only more susceptible to fleeting trends, but also more experimental than her foreign counterparts.

“You know how Delhi women are," she says, “They are so conscious about what they do and what they wear, it has become the thing to have nails on." And the trend is not limited to south Delhi’s affluent neighbourhoods; more and more of Sukhija’s clients are based in north and west Delhi, hence the new location in Punjabi Bagh, which will cater to clients in Rajouri Garden and Model Town as well.

“You have no idea how happening this area is," Sukhija says. “It’s really getting exciting."

Having worked with her mother at Looks for six years, Sukhija opened her first stand-alone nail bar in Select Citywalk mall in 2006. The Punjabi Bagh branch is a reflection of her shifting client base. Many of the women who came to New Friends Colony or Citywalk were from north Delhi and complained that there was nothing like Sukhija’s nearer home.

The women sit side by side, hands held out as if in supplication while two nail technicians keep time, filing briskly with emery boards. Both ladies opt for nail art rather than plain paint. The artist is debating having tiny Swarovski crystals embedded in hers. Sukhija leans over from an adjacent table. “You know what would be nice is to have one crystal on each nail and then a little flower of crystals on your ring finger," she says.

The new salon is painted white with floral murals that match the branch at Citywalk. The chairs are upholstered in pink velveteen and on the wall is a mosaic of pink and purple tiles. Staff wear matching black uniforms with pink collars and lapels and Simar’s Nail Bar embroidered on the chests in pink. The same embroidery is on the hand towels that rest under the customers’ wrists.

The process of creating a set of acrylic nails is an extremely delicate one. Simar’s technicians have it down to a fine art and can do a complete set in under an hour, she says. It’s a strange process to watch, at once vaguely surgical and industrial. “We try to create a base of the nail and then we decide what to do on the client, whether to do acrylic nail or gel nails," Sukhija says. “Acrylic is a little stronger. Then we buff down the fake nail completely to create a level nail and you can’t even make out the gap. Then you paint on top. If a client wants needle art, we drop the colour on and play with it to create swirls or designs with a needle. We also add crystals to any design."

Sukhija, who trains all her technicians herself, spent three months learning the craft in Bombay. Bollywood was the only place in India where the work took place until recently.

“When I came back, I was like a zombie," she says. “I didn’t know how to explain to others what I was doing." The trade picked up briskly though, and she estimates that her salons have about 20-30 appointments a day now for nail extensions, across all the branches.

Her next target market is men. “We have such interesting things for nail biters," Sukhija says, eyebrows raised, “because men really bite their nails. So we have an acrylic coating which makes the nail too hard to bite. When I first started, there were no men. Then they became about 5% of my clientele, and now they are about 40%. They are so addicted to manicures and pedicures now, and why not? Everybody should be conscious about their hands and feet," she says with a final flourish of her bejewelled fingers.

Next: The Family Therapist

Also Read | Other stories in the series