While India's ranking has improved to 81 from 91, the CAF World Giving Index 2017 indicates that philanthropy has declined globallywith the exception of Africa

New Delhi: The eighth edition of the Charities Aid Foundation (CAF) World Giving Index 2017 indicates that global giving has declined across continents with only Africa recording a a positive shift in giving habits.

The report bases its findings on three parameters: number of people donating money, volunteering time and helping a stranger. Asia, unlike Africa, has seen a decline in all three giving behaviours with helping a stranger decreasing from 51% to 47%, donating money from 37% to 33% and volunteering down to 21%. Countries such as Ireland, Germany, Norway, the UK have scores which have decreased between 1 to 5 percentage points and the US has slipped to the fifth position, its lowest ranking since 2011.

“Global decline can be attributed to political environments in individual countries. For example, the report indicates even though Myanmar has retained the top slot for the fourth time, its percentage score is down by 5 points. This can be attributed to the political environment in the country which has changed in the last few years," says Meenakshi Batra, chief executive officer, CAF India.

Meanwhile, India’s ranking has improved to 81 from 91. But there is still room for improvement, if India wants to beat its 2013 ranking of 69. 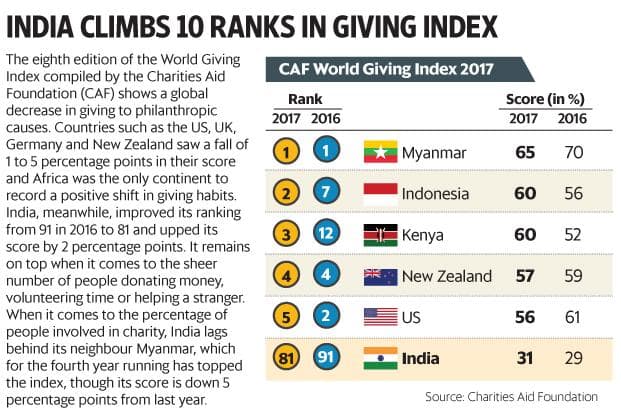 The CAF World Giving Index 2017 is primarily based on data from Gallup’s World View World Poll, which covered 139 countries that together represent around 95% of the world’s population (around 5.2 billion people).

According to the index, 80 countries saw a decrease in the proportion of people helping a stranger. This reduction was seen both in developing and developed economies while a decrease in donation of money was more prominent in developed countries. In fact, the proportion of people across the world who reported donating money in 2016—when the research for this year’s report was conducted—is the lowest in three years. 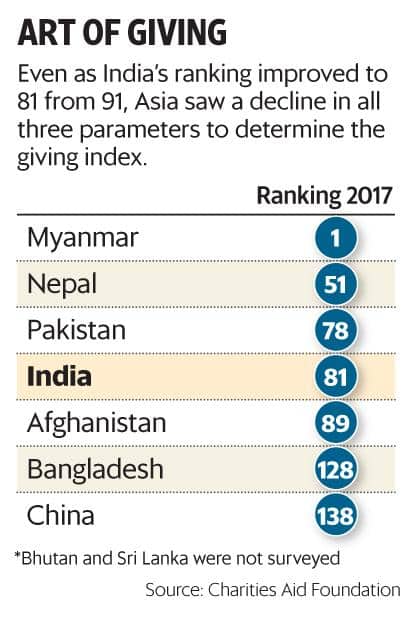 “Given the shifts in stability of many global economies it is not surprising that philanthropy is on a downswing globally. Philanthropy does get impacted when economies are not entirely stable. In addition, major economic changes like Brexit also contribute to downturns," says Deval Sanghavi, co-founder, Dasra, a not-for-profit working with philanthropists

“In India, the CSR (corporate social responsibility) norms that resonate in every board room have made the development sector and related issues a priority agenda. This has led to a rise in number of people exploring philanthropy, giving, and volunteering. This could be a contributing factor towards the Indian ranking moving up by 10 places," says Sanghavi.

The report does caution that these findings do not necessarily reflect long-term trends.