Reliance Industries chairman Mukesh Ambani's only daughter Isha Ambani will get married to young industrialist Anand Piramal today at the Ambani residence, Antilla, in Mumbai. The wedding is estimated to cost more than ₹70 crore.

New Delhi: Billed as India Inc’s most expensive wedding yet, Isha Ambani and Anand Piramal — scions of the Ambani and Piramal business families, respectively, — will tie the nuptial knot at Mukesh Ambani’s house, Antilla, in Mumbai today. While the pre-wedding celebrations were held lavishly in Udaipur with the who’s who of Bollywood, American pop sensation Beyonce, former US secretary of state Hillary Clinton and other VVIPs in attendance, the wedding will be a smaller affair.

Guards armed with automatic rifles led the baraat, ahead of a brass band from Jaipur playing choicest of numbers to which the guests, including the groom’s father Ajay Piramal, swayed.

Anand Piramal, the cynosure of all eyes, followed them all in a vintage Rolls Royce.

Guests started trickling-in soon after, and included former president Pranab Mukherjee, ex-US secretary of state and first-lady Hillary Clinton, the Bachchans, Priyanka Chopra along with her husband Nick Jonas, and Aamir Khan from the tinsel town, and Sachin Tendulkar.

Isha Ambani’s marriage will be held at the Ambani residence in a tony locality off Peddar Road. The 27-storey Antilla, one of the world’s most expensive private residences, has been decked up with lights and flowers.

While media reports had estimated the pre-wedding extravaganza guest list to be of around 2,000 in Udaipur, the wedding guest list has been pruned down to around 600. More than half of the invitees are close relatives of the bride and groom, besides friends. The wedding festivities are expected to cost more than $10 million (Rs 72 crore), according to PTI. 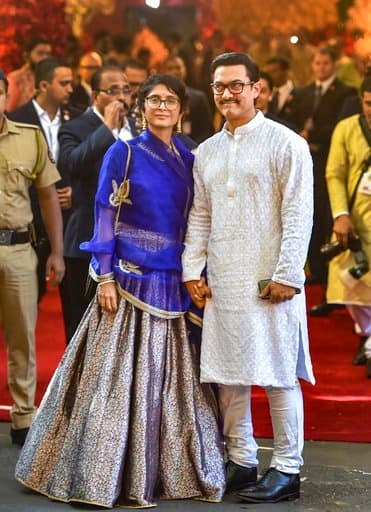 Industrialist Ajay Piramal’s son and real estate developer Anand Piramal, 33, is a childhood friend of Mukesh Ambani’s only daughter, Isha Ambani, 27. While Anand is a Harvard Business School graduate, Isha got her MBA degree from Stanford this year.

Anand is credited to have founded two start-ups—a healthcare start-up, Piramal eSwasthya, and Piramal Realty, a real estate start-up. Both are now part of the $4 billion family-run conglomerate, Piramal Enterprises. Isha, on the other hand, is on the boards of Reliance Jio Infocomm Ltd and Reliance Retail Ltd.

While several Bollywood A-listers are expected to attend the Ambani wedding, the list also includes politicians like Pranab Mukherjee, Rajnath Singh, Prakash Javadekar, Mamata Banerjee, Vijay Rupani, Chandrababu Naidu and Devendra Fadnavis. It is not yet known whether Prime Minister Narendra Modi will also be dropping in to bless the couple.

After the wedding, the Piramal family will host a reception on Thursday, which will be followed with an open-air wedding reception hosted by the Ambanis on Friday at JioGarden in the centre of the swanky BKC business district. There is also a separate do for the employees of both Reliance Industries and Piramal Group on Saturday. Oscar and Grammy-winning music director AR Rehman and tabla maestro Zakir Hussain are expected to play at the BKC dos, according to a PTI report.