Bengaluru: Indian entrepreneurs who have become rich after selling their start-ups or some of their shares in their companies are now investing in venture capital (VC) firms as a means of both multiplying their wealth and building the ecosystem. 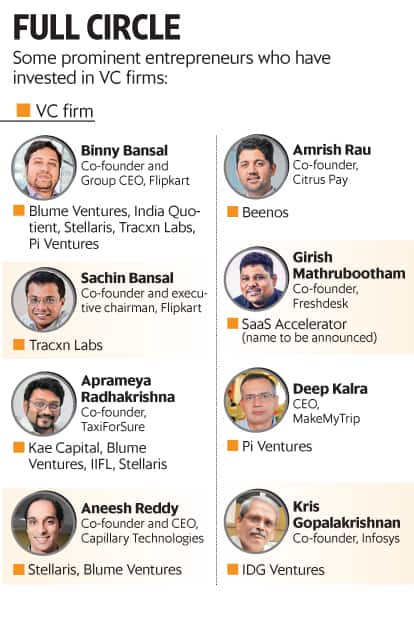 The relatively recent trend of founders becoming limited partners (LPs), or investors in VC firms, is beneficial to both.

“Angel investing is a full-time activity and I don’t have the time or the expertise to do it so I thought it would be much better to invest in a VC firm," said Rau of digital payments firm Citrus Pay, which was bought by PayU India last September for $130 million. “It is also a way to give back to the start-up ecosystem."

“I do both angel investing and investing in VC firms. Having gone through all the stages of running a company, you realize how difficult it is to become successful and the confluence of so many factors that you need. (Investing in home-grown VC firms) helps build the ecosystem," said Radhakrishna, whose start-up was bought by Ola in a $200 million deal in March 2015.

For VC firms, particularly home-grown ones that most entrepreneur-turned-LPs have favoured, any cash is welcome. Taking money from successful, famous entrepreneurs such as the Bansals also adds badge value to the VC firms.

“Entrepreneurs represent high-value-add money," said Manish Singhal, founding partner at Pi Ventures, a VC firm dedicated to investments in artificial intelligence start-ups. “They want to do something for the ecosystem that has made them and they are very eager investors. Having them as LPs could also be helpful in the sense that if one of your portfolio companies needs help, you have the ideal people who can advise them."

“Unlike what happened between 2005 and 2010, a new founder who is starting now first goes to successful entrepreneurs or business executives to raise their first round. So, what we are building is India’s first formal founder network, which is a set of founders, business executives as well as fund managers… These entrepreneurs and executives have the best possible deal-flow in the country," Chowdhri said in a 6 February interview.