Thanks for Visiting Mint
You seem to have an Ad Blocker on. Please turn it off in order to continue, or whitelist Mint
HOW TO TURN OFF AD BLOCKER
OR
REFRESH IF YOU ALREADY TURNED OFF THE AD BLOCKER
Home >Companies >Sir Martin Sorrell | I&#8217;m not a hopeless bear or a hopeless optimist

Sir Martin Sorrell | I&#8217;m not a hopeless bear or a hopeless optimist

Mumbai: On his recent trip to India, Sir Martin Sorrell , group chief executive of WPP, one of the world’s largest communication services group with approximately $15 billion (around ₹ 68,500 crore) in revenue, talks in an interview about the future of global advertising markets, how traditional media can stay afloat and the reasons for moving jobs to India. Edited excerpts:

Last year you had revised growth forecast for global ad spends upwards. Now there’s talk of a slowdown even in fast growing markets such as India and China. Does that worry you?

The answer is, to date, and I’m talking about till the end of July, we have seen nothing that concerns us overtly. The pressure we see in the equity markets when valuation of stocks has been reduced pretty much across the world by 10-15-20% obviously is worrying. Usually markets don’t get things wrong. They are looking 12-18 months ahead and signalling slower growth certainly in the developed markets and, to some extent, in the faster growing markets. America continues to grow, but at a slower rate ...that’s been compensated by growth in the BRIC (countries) and the next 11. If India’s economy is growing at 7-8%, we grow at 14-16%. In this market we will hit over $450 million in revenue this year. In China, we will do closer to $1.1 billion. Growth rates vary depending on which part of the world you look at. BRIC and the next 11 is division I. Division II is the US and Germany. Division III is France, the UK, Italy, Spain, and then division IV is sadly Japan, after the tragic circumstances we’ve seen this year. Although Japan is picking up faster than people thought. So I’m not a hopeless bear. That doesn’t mean I’m a hopeless optimist either.

Having seen the events over the last two to three weeks, consumers are going to be more cautious about buying a car or a washing machine, taking a holiday, and corporates are going to be more cautious about taking on people. Most of our clients work on calendar year. So we will really have to wait to see what will happen in 2012. Having said that, there are a number of good things happening in 2012 from our point of view. The US presidential elections, probably around $4 billion in spending, European Football championships and, of course, the London Olympics.

I always thought 2013 is when America would really have to face the music. 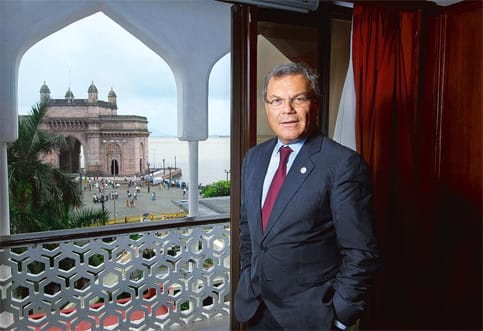 How can media owners brace themselves?

Geographical expansion, especially in fast growing markets, is one thing. Then obviously the expansion into new media. Clearly, the experiments that have been made since we last spoke six months ago, in consumers paying for content they value, have eased the burden on newspapers.

But they are still faced with the basic challenges. Media owners have to consolidate more whether they like it or not. And last, if not the least, if we want to preserve professional journalism particularly in the West, if we value what you do and cannot substitute it with my mobile or flip camera or my blog, then there has to be some sort of state subsidy.

We’ve seen that in Australia; the FCC (Federal Communications Commission) actually issued a statement that said that we should put together a fund to bolster traditional media. The Guardian UK is subsidized by the Scott Trust. So there are these charitable trusts, trophy buyers.

Following the acquisition of Synovateby Ipsos, there were reports that you may be interested in the remaining parts of Aegis Media.

There are parts of Aegis that may be of interest. But it is an academic question. Because the person who controls Aegis, in my view a negative control, is Vincent Bollore, he controls 26.5% of Aegis and he gets $86 million in a special dividend they will pay as a result of the Synovate transaction. So he has more room to breathe and it will really depend on him. He’s a very canny customer. The whole future of Aegis depends not on me or anyone else, it depends on him.

With the emergence of tablets and smartphones, does traditional media have anything to worry about?

If we are talking about India, it’s going to take a longer time, but watch out because it is going to happen.

One of the issues in India is infrastructure. While there is a lot of pressure on the federal government with all these corruption issues, clients have said to me that there are some wonderful things happening at the state level here, for example in Gujarat. The pace and scale of development is very strong because it’s from the roots, rather than top down. So I would be very optimistic. We are seeing people jump over the PC and access the Internet from mobiles. So the take-up will be significant.

By and large, I think, traditional media has a strong position in India and will maintain that position for a longer period of time. But beyond the short- and medium- to long-term, there are going to be challenges. Felling trees and distributing newsprint is not a particularly efficient thing to do. I can pick up all I need from a newspaper from the iPad, and we are just only in the early stages. We’ve got other tablets which are becoming more powerful and effective, and will continue to do so over time. Today, I don’t buy a book, I just download it through my Kindleapplication. I’m an old fogey, but suitcases are for clothes, not for books.

How much will the group look to spend on acquisitions in the next year?

We had these self-imposed limits after (the acquisition of) TNS(market research firm— Taylor Nelson Sofres) in 2008 at a £100 million ( ₹ 750 crore today). This year we are spending significantly in excess of that and are already up to £250-300 million and will spend more than that by the end of the year.

So we have taken off those self-imposed limits. In India, our business will be $500 million next year. If the Indian economy grows by 7%, we will grow by at least 10-15%. You’re talking about $50-75 million growth organically. There are very few acquisitions we can make in India of that scale or size, so they will be very small. But all our businesses without exception are doing better than they were last year.

WPP is moving more than 100 jobs to India. What triggered the decision?

When you get pressure in the marketplace from clients to be more efficient, you look at what can you do in the back office, the non-client facing functions that can be consolidated. If you look at WPP in New York for example, and look down on it from a helicopter eye-view, you see different agencies with different financial departments. There are three levels to this. One is common processes, so why re-invent the wheel everywhere? Number two is, should you offshore those because it’s more effective and efficient? Our competitors have been much more aggressive in this area. Publicis, for example, has a major offshore centre in Costa Rica. And given the pressures in the mature markets, in Western Europe and the US, it is controversial in many respects, but naturally a thing one should focus on.

What development in the media landscape are you most excited by?

The biggest issue is “what is the next best thing?" Four or five years ago we were talking about Second Lifeand virtual reality. That’s disappeared.

We talk about Myspace, obviously, that has disappeared. We have seen the growth of Googleand search and now display advertising, of Twitterand Facebook, and things such as Grouponand LinkedIn.

I think it’s overcooked and we’ll see the floatation, probably, of Facebook if not this year, next year. I think the real issue is trying to figure out where it’s all going, and that’s extremely difficult.