Eight years since the hello got an overture

Eight years since the hello got an overture

New Delhi: It happened for the first time in the world—in South Korea—10 years ago, but it wasn’t till 19 July 2004, exactly eight years ago, that it happened across India. 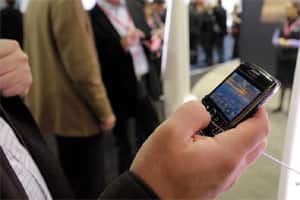 It, of course, refers to the phenomenon where you can call someone and instead of going “ring ring", the phone belts out a popular Rihanna or Bollywood number. Or that perennial “Western music" favourite of Indian teens of all ages, Summer of 69. Or a voice that simply says Jab dekho phone kar dete ho (every time I turn around I see you calling)—an All Fools Day (1 April) joke that is considered one of the most popular caller tunes over the last few years. Or even porn star Sunny Leone’s voice saying, “Hi, this is Sunny Leone. XYZ (insert name) is busy with me right now. Please hold on. He’ll pick your call shortly."

Reinforced by the Indian love for music and supported by the fact that most people in the country do not care if their bosses call their phone and hear some abstruse (and patently inappropriate) Bollywood tune, the business of caller tunes is now estimated to be worth ₹ 2,000 crore in India, according to data from Bharti Airtel Ltd. Around 66 million people have used the service, known as caller ring back tones (CRBT) in industry lingo, and of this, 48 million are active paid users, who pay up to ₹ 5 to download a song (and ₹ 30 for a monthly membership) and make it their caller tune. The number of active users increases by between 10% and 20% a year, according to Bharti Airtel. And almost seven of every 10 active users change their caller tune every month, said a senior telecom executive who did not want to be identified. 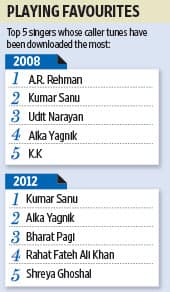 It is also a business that has created an ecosystem of its own.

Apart from the telcos and the owner of the music, usually Super Cassettes or companies like it, this ecosystem includes so-called mobile value-added service (VAS) companies such as Hungama Digital Media Entertainment Pvt. Ltd, OnMobile Global Ltd and One97 Communications Pvt. Ltd.

Tired of hearing bad music when you call someone? Caller ring back tones are now eight years old and seem likely to get more popular.

The revenue from caller tunes accounts for a substantial proportion of India’s ₹ 900 crore music industry.

“The caller tune has now become the single largest contributor of music, despite being a derivative of a full song," said Albert Almeida, chief operating officer of Hungama, one of the largest distributors of digital content in India.

Indeed, caller tunes account for just a little less than one-fifth of all VAS revenue in India. According to a 2011 Deloitte Touche Tohmatsu India Pvt. Ltd report, the VAS industry is worth $2.1 billion (Rs 11,613 crore today) by revenue and will grow to $4 billion by 2013.

“The main reason it has become so popular is that in the current world of social media, it allows a user to express the kind of person they are and what mood they are in," said Almeida.

“Everyone now uses the phone as a tool for expression of their personality," said N. Rajaram, chief marketing officer for Bharti Airtel.

“Music has always been one of the more important passions in our country," he added. Bharti, the largest mobile phone services provider in India, was the first to introduce caller tunes at the national level in July 2004. Songs from Bollywood releases Main Hoon Na and Mujhse Shaadi Karogi were the first to be released as caller tunes.

BPL Mobile (now Loop Mobile) had introduced the service in June 2004, but only in Mumbai.

Today, caller tunes are an accurate measure of a song’s popularity. The most popular song currently is the tune of Aamir Khan’s show Satyamev Jayate that saw two million downloads in 45 days, overtaking Kolaveri Di.

“The fact is that because people pay for every song that they download and, in most cases, think it through before selecting a song," Rajaram said, caller tunes are “a better indicator of the popularity of a song than what the charts reflect".

And the popularity charts provide some interesting glimpses into what India likes. According to data from Bharti Airtel, the most popular category is the soundtrack of Bollywood movies from the 1980s and 1990s.

Still, the business of caller tunes comes with its own challenges.

“One of the biggest challenges with CRBT is that it is the only value-added service where the caller does not experience the service they are paying for. So getting people to change the song is difficult as they often forget what song they have subscribed to," said a second telecom executive who also did not want to be identified.

Another key challenge is creating a search and delivery mechanism that enables a user to find what he or she is looking for. These include copying a tune a caller hears when he or she calls another person; a song-catcher where the user can dial a number and say a song’s name or even place the phone next to a radio or any other device playing the song, or an IVR (interactive voice response) system.

Both Almeida and Kalyan believe the Telecom Regulatory Authority of India’s new guidelines make it difficult for VAS firms to push caller tunes. Both are convinced that the business is here to stay, grow, and maybe acquire another dimension as well.

“With access getting easier and the whole ecosystem now coming together, and the entry of new technologies and smartphone devices, video linkage or caller tunes with a video aspect are not far away," said Rajaram.