New Delhi: He is uncomfortable being called the pioneer of the multiplex revolution in India, although, he kicked off the trend with the relaunch of Anupam cinema in the Capital as a four-screen film complex in 1997. “It happened by default," says Ajay Bijli, chairman and managing director of PVR Ltd, the Rs350 crore film exhibitions company that builds and operates movie screens—108 at last count—in the country. Last year, PVR’s film distribution subsidiary PVR Pictures entered the production business when it made two decidedly successful films—Taare Zameen Par and Jaane Tu...Ya Jaane Na—with Aamir Khan. 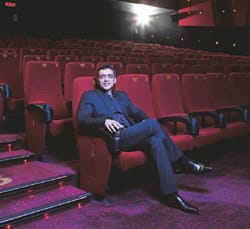 Yes, JPMorgan and ICICI Venture invested Rs120 crore in the subsidiary about eight months ago. We haven’t spent the money yet. We’ve been evaluating projects and waiting for creativity and commerce to fall in place. We have now done a two-picture deal with Abhay Deol. Abhay’s films are unique and he comes with Navdeep Singh, the director who made Manorama Six Feet Under. There’s also a two-film deal with Neeraj Pandey, the guy who did A Wednesday!

The plan is to do six-eight films in the financial year 2010-11. The truth is, it is very easy to get excited about a script or a project that comes your way. But we need to evaluate a project from both the budget and the creative point of view. At the end of the day, I have to make JPMorgan and ICICI Ventures, who own 40% in PVR Pictures, happy. For me to say yes, rather for us (my brother Sanjeev and the team) to say yes to something, a lot of things have to fall in place. We are new to the film production business. Exhibition is the backbone of the company.

But it is the exhibition business that showed losses in the first quarter this year.

The Rs10 crore loss is completely attributable to the strike (caused by a spat between multiplex operators and film producers). Out of the 90 days, we shut down the theatres for 44. Our occupancy level fell below 15%. It was quite a disaster.

So PVR Ltd will post a loss at the end of this financial year.

‘I want to be an investment advisor for the middle class’

Mint Explainer: The big picture behind the MNREGA cut

Why central banks are stockpiling gold

No. The last three quarters will be like any other year. There was a huge pent-up appetite. From New York onwards, the industry hasn’t looked back. Love Aaj Kal, Kambakkht Ishq and now Wake Up Sid have done well. It’s been an incredible run. Occupancy is back to over 45%. Last year we had 18 million people visiting PVR. This year we will have 22 million. It should be a cracker of a Diwali with releases like All The Best and Main aurr Mrs Khanna.

You’ve said that at 23 when you relaunched the family-owned Priya theatre in Delhi, you had no strategy. What’s your strategy today?

My dad gave me the opportunity and the money—Rs40 lakh or so—to redo Priya. When that became successful, I realized the world had moved to multiplexes. But what strategy could I have in that environment? The entertainment tax was very high, ticket prices were controlled and there were no malls. So it was one step at a time. When the first multiplex opened in Delhi in 1997, I sold 20% of my tickets for Rs5.

Today, the company has three verticals—exhibition, film production and distribution, and retail entertainment. The exhibition business is still untapped. We have only covered 14 cities, we could go to another 10. We are opening 44 new screens this financial year including in new cities like Allahabad and Vijayawada.

Do you earn more from popcorn than films at your cinemas?

No. Sixty-six per cent of the revenue comes from ticket sales while food and beverage contributes 23%. Whatever is left is generated from marketing such as on-screen and show window advertising tie-ups.

Are you acquiring DT Cinemas from DLF?

Nothing has happened yet. But the due diligence is done. Inorganic growth is something I get excited about sometimes, but sometimes I worry. In organic growth, you are controlling your destiny. There are so many companies out there… DT is one of them. It has 30 screens or so.

If it happens, it isn’t a bad acquisition.

On the face of it, it looks attractive but the pricing, valuation...everything has to be right. That’s all I can tell you right now. I am always tempted to grow inorganically.

Does the entry of international multiplex chains such as Cinepolis bother you?

No. I have been in this business far too long to panic. We know how hard the terrain is.

Where does your father’s trucking business, Amritsar Transport Co. (ATC), stand in your scheme of things?

My brother and I still own 90% of the business. The remaining 10% is with my cousins who run it. We meet every month. I feel guilty of not growing the business. It is a time management issue. Logistics is big today. But ATC hasn’t gone into the express logistics space like, say, Gati. It is a Rs150 crore business but servicing a different segment.

What kinds of films do you enjoy and where do you like to watch them?

Where I watch a film is a matter of convenience. Increasingly, I find I have less time to go to the theatre. But I saw The Hangover recently and it was embarrassing how much I was laughing. It is hilarious. I watch anything and everything unless the film gets really bad reviews or the theatres are empty.

How about the seriously heavy stuff?

I don’t go that deep. Though I picked up a DVD set of Kurosawa. I watched two movies—Seven Samurai and Rashomon. I didn’t know I had it in me to appreciate these films.

I must mention that I did a course in script-reading in January. I went to LA (Los Angeles) to learn from (screenwriter) Syd Field who customized a course for me—it was a one-on-one as I did not have time to go to college. I used to get homework. I watched two films and read a couple of scripts every day. We discussed these the next day. I have not been able to watch a film in the same way again. I look for “plot points" and I have bored the hell out of everybody else with my analysis.

Yes. My daughter Niharika is 17 and she is ready to go to a film school in the US. We are deciding on which one. My other two children are still young but surprisingly very enthusiastic about the business.

Any tips for aspiring entrepreneurs?

All I can say is that sincerity and integrity are a prerequisite in any business. Also, remember there are no short cuts. You will see my motto in my office. It says: “Be modest. A lot was accomplished before you were born."