When Telenor ASA decided to upgrade its mobile phone network in Norway, the job drew bids from the companies that had built its original grid: Ericsson and Nokia Siemens Networks.

Instead, Telenor this month chose Huawei Technologies Co. Ltd, a Chinese equipment maker, to build its ultrafast network based on a technology called LTE, or Long Term Evolution. 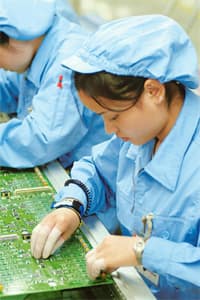 Unique products: A worker in Huawei’s factory in Shenzhen, China. The company has leapfrogged to No. 2 in the telecom network market. Grischa Rueschendorf / Bloomberg

Grabbing the contract in the heart of Scandinavia was the latest coup for Huawei, the rising star of the mobile equipment industry, whose low-cost, multi-purpose networks have catapulted it to No. 2 in the world, behind Ericsson.

“Huawei has established itself as a serious competitor," said Morten Karlsen Sorby, the head of global business development at Telenor. “They have been able in a very short period of time to build the necessary competence and innovation."

But as Huawei’s influence grows—it leapfrogged Alcatel-Lucent and NokiaSiemens in quarterly sales this year, according to Dell’Oro, a research firm in Redwood City, California—the private company founded in 1988 by Ren Zhengfei, a former officer of the People’s Liberation Army, has fought the perception that it has ties to China’s government and military.

A 2007 report by the RAND Corp., a policy research institute, for the US Air Force said Huawei “maintains deep ties with the Chinese military, which serves a multifaceted role as an important customer, as well as Huawei’s political patron and research development partner".

Security concerns motivated a US government panel to reject Huawei’s joint $2.2 billion (Rs10,230 crore) bid with Bain Capital in 2008 for 3Com Corp., a US communications equipment maker that produces anti-hacking software for the US military.

Huawei’s private ownership—which it has never disclosed in detail—has brought it scrutiny in India and Australia this year as it has bid on contracts.

Edward Zhou, the Huawei marketing director for Europe, dismissed questions surrounding the firm’s ownership structure as “market speculation", saying Huawei was owned by its 80,000 employees and had no links to Chinese officialdom. “No government or government-linked organizations have any ownership stake," Zhou said during an interview.

A senior executive for one of Huawei’s main rivals, who did not want to be identified because he was not authorized to speak for the company, said he did not know of any government ties the firm might have but that that did not mean they did not exist. “They are very aggressive as a vendor," he said. “But there is a definite lack of transparency, which makes it very tricky for us."

Questions surrounding its ownership have not prevented Huawei from supplying 36 of the world’s top 50 mobile operators, including Telus Corp. in Canada and Clearwire Corp., a WiMax operator majority owned by Sprint Nextel Corp., in the US.

All were attracted to innovative Huawei products such as its SingleRAN, a multi-purpose wireless network that transmits in second- and third-generation, as well as LTE, signals, saving operators the expense of separate, parallel grids. In-Stat, a research firm in Scottsdale, Arizona, says Huawei was the first firm to produce an LTE base station, the fastest in the industry, on a large scale.

“In whatever sector they are competing in, Huawei is a major player," said Jeff Heynen, an analyst at Infonetics in Raleigh, North Carolina. “They are now among the top three in almost every market."

Supplying gear to China’s three big operators—China Mobile Ltd, China Telecom Corp. Ltd and China Unicom (Hong Kong) Ltd—helped Huawei almost double its share of the $38 billion global mobile equipment market to 20.1% in the third quarter from 11% a year earlier, according to Dell’Oro. Huawei moved past Nokia Siemens, at 19.5%, and trails Ericsson, which has 32%.

Inexpensive Chinese labour and Huawei’s private ownership, which spares the firm from having to pay regular dividends, let it underbid rivals by 40-50% on an average, said Scott Siegler, an analyst at Dell’Oro.

That has roiled the industry, Siegler said. As Huawei’s sales soared in 2008, Ericsson’s rose 11%, while Nokia Siemens’ declined 0.7%.

Rather than underbidding, Zhou said it was Huawei’s unique products, such as the SingleRAN, short for single radio access network, that were winning contracts. The SingleRAN lets mobile firms cut operating costs, which account for 80% of expenses over the lifetime of a network.

“From a cost perspective, we are not the lowest bidder in many projects," Zhou said. “But our focus has been on lowering the total cost of ownership for the network as a whole."

“Huawei is crushing the market," Siegler said. “They continue to win market share and are forcing others to compete on their terms."