The debt-servicing capabilities of India’s conglomerates

Total debt at the top 10 groups has risen 7 times over the past 8 years, and adds up to 12% of the loans in the banking system and 27% of corporate loans

Financial stress at India’s top 10 conglomerates has worsened despite their efforts to pare debt by cutting capital spending and selling assets, Credit Suisse Group AG said in a report titled House of Debt released on Wednesday—an update to a 2012 report that listed India’s 10 most indebted corporate houses. Total debt at these groups has risen seven times over the past eight years, and adds up to 12% of the loans in the banking system and 27% of corporate loans.

Their interest coverage ratio dropped to 0.8 in 2014-15 from 0.9 in 2013-14 and their debt-to-Ebitda (earnings before interest, tax, depreciation and amortization) multiple rose to 7 from 6.8. Ebitda is a measure of operating profitability.

The interest coverage ratio is a yardstick of how easily firms can service their debt while the debt-to-Ebitda ratio refers to how many years it would take for a company to pay back its debt if net debt and Ebitda are held constant. A high debt-to-Ebitda multiple suggests that a company may not be able to service debt; when a firm’s interest coverage ratio is 1.5 or lower, it may be unable to meet interest expenses.

A quick look at the debt-servicing capabilities of 10 business groups. Debt servicing: Billionaire Gautam Adani-controlled Adani Group’s unit Adani Power Ltd has had an interest coverage ratio of less than 1 for 15 consecutive quarters. Adani Power has, according to news reports, refinanced ₹ 19,000 crore of debt under the so-called 5:25 refinancing scheme for its Rajasthan and Maharashtra plants; the interest rate has remained the same at 12% while the tenure has increased from 10 to 19 years. The scheme allows banks to extend long-term loans of 20-25 years to match the cash flow of projects, while refinancing them every five or seven years. Adani Power would also get an 18-month moratorium towards repayment of principal. Another unit, Adani Enterprises Ltd, also has ₹ 9,000 crore of long-term debt (11% of total debt) up for repayment in fiscal year 2016 (estimated), along with ₹ 19,500 crore of short-term debt. Since September 2012, the Ruias-controlled Essar Group has raised external commercial borrowings amounting to $1.5 billion, of which $1 billion has been used for refinancing of existing loans. Its units Essar Steel Ltd and Essar Oil Ltd have converted close to half their debt to dollar-denominated debt. Essar Steel is also looking to refinance loans under the 5:25 scheme. Essar Steel has also been classified as an NPA (non-performing asset) by HDFC Bank Ltd and Bank of India, after which its debt was downgraded to ‘D’ (default) by credit assessor Credit Analysis and Research Ltd (CARE), according to the report. Essar says its debt should not be seen in isolation of its assets, capacities built and significant equity of ₹ 75,000 crore contributed to its businesses. With ₹ 48,000 crore of domestic debt, the Bengaluru-based infrastructure conglomerate would need to earn Ebitda of ₹ 5,000 crore just to meet interest expenses, which the group is currently not able to. The company also has ₹ 5,800 crore of long-term debt due in fiscal year 2016. The company has had an interest coverage ratio of less than 1 for every quarter since March 2010. Interest cover declined sharply in fiscal year 2015, to 0.02, as the Hyderabad-based infrastructure conglomerate’s earnings before interest and tax fell 93% year-on-year and interest cost increased 55% on account of the completion of the Mumbai airport’s expansion. Interest costs are likely to increase in fiscal year 16, with the commissioning of two power projects, for tying up fuel supply. The group has had an interest coverage ratio of less than 1 for 14 consecutive quarters. The company has ₹ 5,500 crore of debt due within the next 12 months. The debt of Jaiprakash Associates Ltd, which is led by Manoj Gaur-led Jaypee Group, was recently downgraded to default status by CARE after the company failed to repay investors in a bond issue. Another unit, Jaypee Infrastructure Ltd, was looking to refinance ₹ 1,0300 crore of debt for its Yamuna Expressway project under the 5:25 scheme, but the company has defaulted on repayment of its loan, and has been downgraded to D or default rating by CARE. The group has had interest coverage ratio less than 1 for nine consecutive quarters. Sajjan Jindal-led JSW Group has had no trouble meeting its debt obligations so far. However, with the rising stress in the steel sector, interest cover for JSW Steel Ltd has fallen below 1 over the past couple of quarters. With acquisitions being undertaken by JSW Energy Ltd, its debt levels are rising and debt-Ebitda ratio could see increase further (2x in fiscal year 2015). L. Madhusudhan Rao-led Lanco Infratech Ltd has ₹ 2,200 crore of long-term debt due within the next 12 months, with another ₹ 4,500 crore in short-term debt. Its interest coverage ratio was at 0.2 in fiscal year 2015; the ratio has been less than 1 for 18 consecutive quarters. 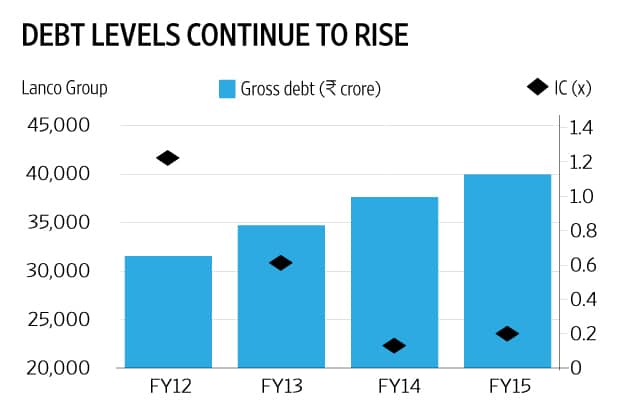 Anil Ambani-led Reliance Group’s debt levels remained largely flat in fiscal year 2015. The debt-equity ratio is reasonable at 1.1, while the debt-to-Ebitda ratio remained high at 6.8. Around 46% of group debt is in foreign currency, making the cost of funds cheaper. 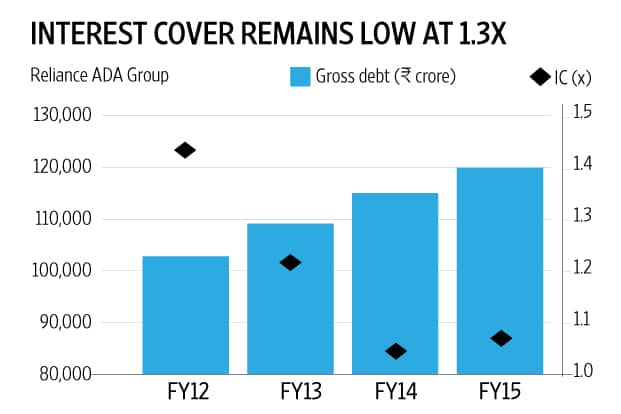 In January 2015, Moody’s Investors Service Inc. downgraded its outlook on London-listed minerals conglomerate Vedanta Resources Plc from “stable" to “negative", while Standard and Poor’s lowered its rating from BB to BB- with a negative outlook. The interest coverage ratio of the Anil Agarwal-led mining conglomerate declined in fiscal year 2015 to 1.3, according to the Credit Suisse report Venugopal Dhoot-controlled Videocon Group had negative earnings before interest and tax for the 18 months ended December 2014, and has had an interest coverage ratio of less than 1 for the past 13 consecutive quarters. With a market capitalization of ₹ 4,500 crore, its debt-to-market capitalization ratio is high at 10.