Dr Lal Pathlabs, which has 150 labs, 2,000 collection centres, and serves 10 million a year, has expanded to West Asia, Nepal and Malaysia

Mumbai: Start-up doesn’t seem to be an apt word to describe a company that is almost as old as independent India. Yet, it does seem suitable to describe a firm that has sought to organize India’s fragmented pathology or testing laboratories business since 2005 when it first received an equity infusion from a venture capital firm and which has, since, grown almost 10 times in terms of revenue.

Today, the firm has 150 labs, 2,000 collection centres, and serves 10 million a year. It has also expanded to West Asia, Nepal and Malaysia, but India is where it sees the most potential.

“India is a huge underserved market. There is a huge growth potential in the south and west Indian markets," said Om Manchanda, chief executive officer of Dr Lal PathLabs, who joined the company in 2005.

The company has charted a five-year plan which includes continuing to grow at a compounded annual growth rate (CAGR) of 35%, expanding through organic and inorganic means, and entering new international markets.

“We will continue to add 10-15 centres every year. We are considering acquisitions in western and southern parts of the country, where we have a thin presence," said Manchanda, adding that the growth will be funded through internal accruals.

The highly fragmented diagnostics and pathology labs market in India is pegged at $3.4 billion, according to a recent report by audit and consulting firm PricewaterhouseCoopers. It is the fastest growing segment in the Indian healthcare space, the report said. 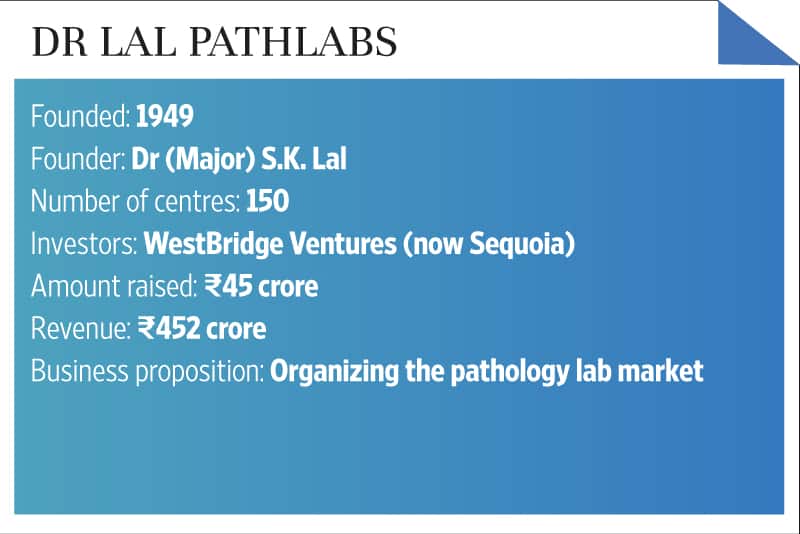 The company has so far raised ₹ 45 crore from WestBridge Ventures I across two tranches. It has seen two secondary transactions, when stake changed hands between WestBridge Ventures and private equity firm TA Associates (in 2010) and WestBridge Ventures and WestBridge Crossover Fund (in 2013). In the latest secondary stake sale earlier this year, Dr Lal PathLabs was valued at between ₹ 1,500 crore and ₹ 1,750 crore, against its valuation of ₹ 100 crore when WestBridge first invested in the firm. Dr Lal PathLabs is a zero-debt firm, said Manchanda and is not looking at fund-raising now. “Ours is a high return on capital business and capital requirements are not high," he said. Diversification is, however, on the cards. One possible area of expansion will be high-end imaging, Manchanda said.