Ramanagara/Varanasi: Kumar goes to the government cocoon market in Ramanagara (Karnataka) eight times a year to sell his produce - some 80kg of silk cocoon each time. All he gets for those 640kg of raw silk ingredient is about ₹ 2 lakh a year. He used to get more earlier. Kumar says his earnings have declined by nearly one-third in 10 months—since the government made it cheaper for weavers to import raw silk. 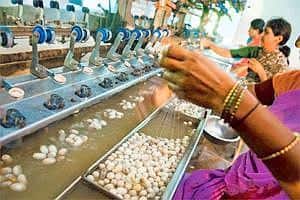 Left in the lurch: The process of reeling silk from cocoons under way in Ramanagara.(Photos: Aniruddha Chowdhury/Mint)

Some 1,800km away in Varanasi, the holy town also known for its iconic handcrafted silk saris, 80-year-old Mohammad Arafeen works as a daily wage labourer weaving silk saris. A single bulb hangs above the frame of his handloom, enough light spilling out of it for him to see what his finished product looks like. Arafeen used to buy his own silk once but works now under a master weaver, mostly because he finds himself unable to afford silk any more.

Five years ago, raw silk from China used to cost ₹ 1,400 a kg; now it costs ₹ 2,299 a kg—a result of the mismatch between demand and supply of silk yarn in terms of quantity and quality. Prices of finished products have risen as well, but in the silk trade, the weaver—a mere part player in the run to the market—doesn’t gain from the increases.

Kumar and Arafeen are at the opposite ends of a decision the government took in February to cut import duties on raw silk from 30% to 5%. The move, aimed at helping the weaving industry, has ended up being a drag on the 125,700 families the government lists as sericulture families, by making it cheaper to import from China. The small weaver hasn’t benefited either, as the lowered import duty hasn’t done anything to cool raw silk prices.

More than 80% of the silk sold to weavers in Varanasi comes from China, and much of the remaining from Ramanagara. A decade ago, the share of Chinese silk in the market was close to 40% since the majority of weavers worked on handlooms.

Silk yarn from Ramanagara is always ₹ 300-400 a kg below the cost of Chinese yarn, says G.K. Kediya, convener of the Yarn Development Committee of Banarasi Vastra Udyog Sangh, an independent committee of traders and manufacturers in Varanasi working to revive the handloom industry.

“Though the silk from Ramanagara is cheaper it cannot be used on a powerloom. The thickness is uneven and the yarn is not strong enough," he says. Since most of the weaving has now moved to powerlooms, the demand for Ramanagara silk has dropped."

The pared import duty also made it easier for big weavers to buy raw silk from China as they moved to powerlooms, rather than buy inferior silk from Ramanagara.

Chinese silk is of uniform quality as the reeling is done at factories using automatic machines. On the other hand, reeling in much of India is primarily a cottage industry, and consequently the quality of silk varies from household to household. This is disadvantageous for weavers especially when they’re producing in bulk, the official says. Plans for establishing a silk reeling factory in Ramanagara have been around for a while, but there has been no progress on this. Silk farmers in Karnataka have taken to staging protests—the most recent was in November when farmers blocked the expressway linking Bangalore and Mysore. They rejected a government of Karnataka offer for a minimum support price of ₹ 30 for every kg of cocoon sold below ₹ 160, saying it was too little.

Kumar, a farmer in Ramanagara district of Karnataka, sorts out cocoons

Though the cost of raw silk—each kg is made from 7-9kg of silk cocoon—has stabilized at about ₹ 2,200 a kg since the import duty was reduced, the wages of the weavers haven’t improved. The average wage a weaver gets for a silk sari has remained at ₹ 250-300 the past three years.

As prices of raw silk rose, some 100,000 weavers left Varanasi over the past few years in search of more stable jobs elsewhere. Those who stayed back struggle to cope.

Ramanagara’s main claim to fame, apart from the silk industry that used to thrive here, is the fact that the iconic Hindi film Sholay was shot in the rocky outcrops outside of town. It calls itself the silk town, with the largest cocoon market in India.

Here, silk worm eggs are bought from the government and private granages and reared by farmers in basins where they hatch for 25 days. They are then transferred to straw mats with little shelves to hold the worms. These mats, called chandrike in the local parlance, are allowed to catch sunlight for five days, which is when the worms start weaving their cocoons.

The process takes five days, after which the cocoons are sold at the cocoon market. Silk reelers boil the cocoons to kill the worms and loosen the thread, after which the cocoon is attached to machines that reel the silk thread. India rears about 129,482 tonnes of cocoon and makes 16,957 tonnes of raw silk in a year. Farmers mostly grow the mulberry silk worm, which is of a lower quality than the bivoltine breed of silk worm, but is preferred because it is better suited to the climate in India.

Karnataka is the largest silk-rearing state in the country. It, according to government statistics, has about 62,697 hectares of land under mulberry cultivation and produces 7,338 tonnes of raw silk. Kumar of Ramanagara has been lucky, says M.C. Nagaraj, an erstwhile reeler who sold his weaving equipment in 2002 when prices crashed and took up a job as a daily wager at the cocoon market where Kumar hawks his produce. 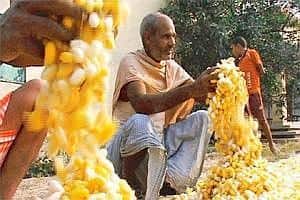 The earlier 30% duty had played a role in making Ramanagara silk more attractive than the silk from China, where better technology has been employed to improve both the quality and price of silk. An official from the Karnataka sericulture department, who can’t be identified as he is not authorized to speak with the media, says following the drop in import duties, weavers opted for Chinese silk over the home-grown variety.

In November, the Union government announced a ₹ 6,234 crore package for 1.3 million weavers. In Uttar Pradesh, the package is aimed to benefit about 200,000 weavers under debt. It is due to be implemented from January.

The package encompasses a ₹ 3,884 crore debt waiver and ₹ 2,350 crore for a sixfold strategy to uplift the conditions of weavers during the 12th Five-Year Plan period that will begin in April. The scheme will also assist 15,000 weavers’ cooperative societies, besides individual weavers. Weavers in Varanasi are not optimistic. “We heard a similar scheme had been announced earlier as well; it never reached us," says Ifthakar Ahmed, a weaver in Mubarakpur. “Similarly, we have heard from some people about this announcement as well, though we do not know how to avail it since we usually take loans from moneylenders or the master weavers."

Shamsheer Yousaf in Bangalore contributed to this story.