Mumbai: Smaller cities and towns that are fuelling India’s economic expansion through their growing consumption have emerged as key markets for advertisers seeking to tap their purchasing power, says audit and consultancy firm Ernst and Young Pvt. Ltd (E&Y).

“We are witnessing an enormous opportunity in the non-metro urban markets with a large consumption base...," Ashok Rajgopal, partner (media and entertainment practice) at E&Y, said on Tuesday.

The consultancy released a report that tracked consumption patterns across the six metros (Mumbai, Delhi, Bangalore, Hyderabad, Chennai and Kolkata), key urban towns (KUTs) comprising the top 22 cities outside the metros and the rest of urban India (ROUI).

The report says that the benefits of India’s growth story were not restricted to the metros, with KUTs and ROUI accounting for over 70% of urban consumption today. A few years ago, the top eight cities accounted for almost 40% of the country’s domestic expenditure. Today, the six metros account only for 27% of that expenditure. 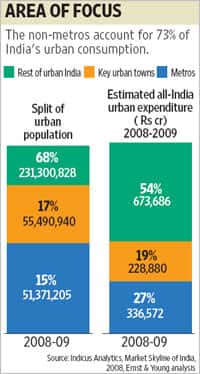 KUTs exhibited consumption patterns similar to those in the metros, where consumers show a preference for premium products and services of established mass brands. For instance, men are accessing so-called wellness services even in the smaller cities and towns while women are opting for body toning and procedures to remove skin imperfections.

ROUI is also becoming an increasingly important consumer. While the metros and KUTs drive discretionary spending and consumption of higher priced products, ROUI is driving growth in consumption of necessities and products with a lower transaction value.

KUTs and ROUI today command 40-50% of the country’s urban advertising expenditure, according to industry estimates, up from 30-35% in 2007. “Considering that media rates are much lower in non-metros, the shift in volume of marketing spends is even more significant," said Rajgopal.