New Delhi/Mumbai: Paytm Payments Bank has stopped enrolment of new customers on its platform following observations made by the Reserve Bank of India, four people with knowledge of the matter said. Paytm stopped enrolling new customers on 20 June following an audit by RBI, which made certain observations about the process the company follows in acquiring new customers and its adherence to know-your-customer (KYC) norms, three of the four people said, requesting anonymity.

“RBI has directed Paytm Payments Bank to stop onboarding of new customers with immediate effect," said one of the four people.

Another person, a company executive, said that Paytm is modifying its “account opening process to introduce ‘current accounts’ due to which new account creation process has been paused". 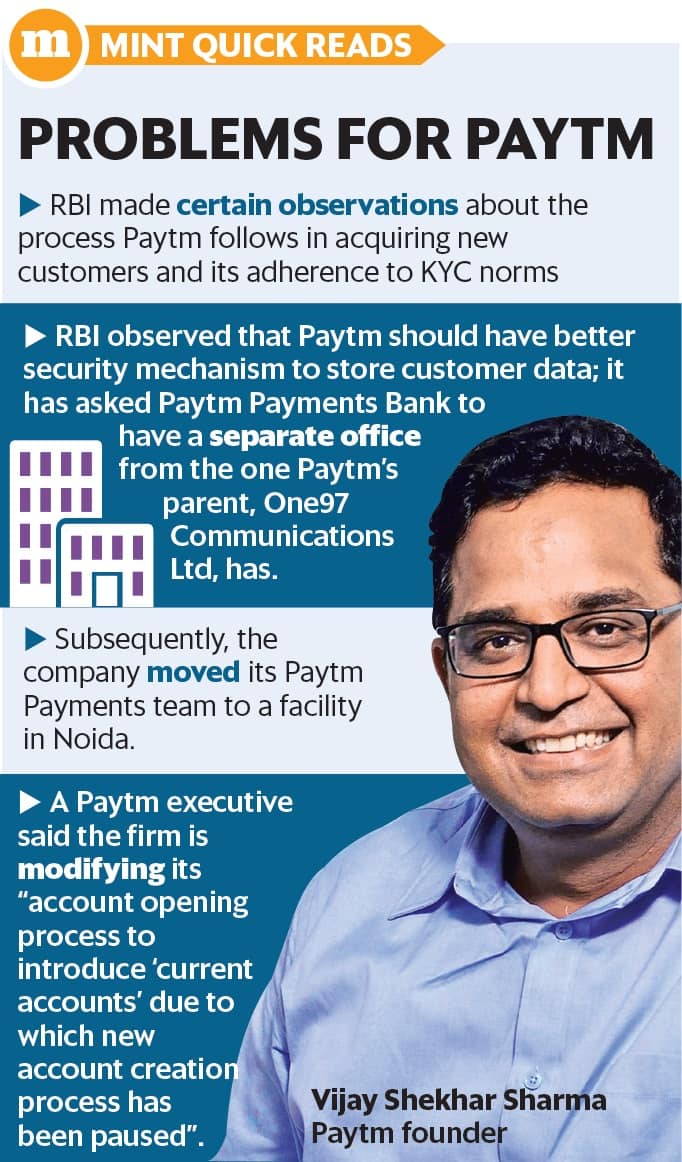 A Paytm spokesperson, however, said: “This is incorrect... Renu Satti’s appointment was made on 19th May 2017 vide an official approval from RBI."

In a statement on Friday, Paytm said Satti had stepped down from her position as Paytm Payments Bank CEO to take on a new role within the company. She will be leading the new retail business at Paytm as its chief operating officer.

Paytm is yet to fill the position of the payment bank’s CEO. The spokesperson did not comment on whether Paytm has been told to stop enrolling new customers.

RBI also observed that Paytm should have better security mechanisms to store customer data and asked Paytm Payments Bank to have an office separate from that of One97 Communications Ltd. The company recently moved its Paytm Payments team to a new facility in Noida.

A query sent to RBI remained unanswered as of Tuesday night.

Paytm has been witnessing a surge in adoption of digital payments in tier-II and tier-III cities, which now account for half of its total user base. This has helped it achieve an annual run rate of five billion transactions and $50 billion in gross transaction value (GTV), Paytm said in July. This is a sharp rise from June 2017 when the company’s GTV was $1 billion.

Gross transaction value for Paytm includes everything from recharges, bill payments to peer-to-peer transactions via UPI (Unified Payments Interface), peer-to-peer wallet transactions and all purchases made via the Paytm Mall platform or the Paytm payment gateway. It does not include National Electronic Funds Transfer, or debit and credit card transactions.

The payments bank business, although in its nascent stage, has been under the scrutiny of authorities, including the Unique Identification Authority of India (UIDAI), which had in December temporarily barred Bharti Airtel Ltd and Airtel Payments Bank Ltd from conducting Aadhaar-based SIM verification of mobile customers using eKYC (electronic know your customer) process as well as e-KYC of payments bank clients.

Paytm Payments Bank is a separate entity, with 51% owned by Vijay Shekhar Sharma and the rest held by One97 Communications.

One97 Communications, the parent of Paytm, has raised over $2 billion since its inception, and is currently valued at over $10 billion.

Paytm competes with wallet players such as MobiKwik, FreeCharge and PhonePe. The number of mobile wallet users in India is expected to grow from the current 200-250 million to around 500 million in the next couple of years.