Eight years after the Private Equity Strategy scheme raised funds, investors could make a return of a mere 0.26%at best

In the summer of 2008, a wealth adviser for Citibank approached Mahesh Shah, 46, a Mumbai-based businessman, with a new investment product, a seven-year (extendable to eight) portfolio management service product with a private equity strategy.

According to the presentation made to investors such as Shah (Mint has reviewed a copy), the scheme was touted as an opportunity to get into companies at a very early stage, watch them grow and reap the rewards.

“Benefit from India’s untapped potential," one slide said, along with the picture of a sapling.

The strategy was to invest in companies that came with “good business", “strong management" and at “attractive valuation" to ride the story of “emerging India" and “a healthy Gross Domestic Product growth".

The scheme raised ₹ 490 crore from about 1,000 investors. An investor was required to invest a minimum of ₹ 40 lakh.

Eight years later, investors could make a return of a mere 0.26%. This number—a best case scenario—is also based on an assumption that one of the scheme’s investments, in Ver Se Innovation Pvt. Ltd, will work out, according to a person familiar with developments at the fund. This person, who asked not to be identified, said Franklin Templeton has said as much to distributors who sold the scheme.

According to two clients’ account statements, which have been reviewed by Mint, the fund house charged a total of 15-18% of the capital invested as management fees between 2010 and 2015. As per the product literature cited above, the scheme charged a management fee of 2.5% of the portfolio value at the end of every year. Additionally, there was a 2% fee that was charged, upfront, of capital committed.

“Investing in private equity products involves significantly higher degree of risk compared to retail products like mutual funds. Franklin Templeton Private Equity Strategy (FTPES) was an offering targeted at the high-net-worth investor segment. Challenging market conditions during the initial years and the inability of some of the portfolio companies to keep up with changes in the business environment led to a mixed performance of the portfolio holdings in this strategy. This in turn has had an adverse impact on the overall returns at a portfolio level despite some successful exits. We are aligned with the interests of investors with an aim to fully exit the private equity strategy at the best possible value and continue to keep our investors informed on developments."

Shah says the Citibank division that had sold this product to him has been shut down, and that his relationship manager has left the bank. Mint couldn’t independently confirm this.

The scheme was also sold by Dutch lender ABN Amro. ABN Amro’s retail division, the department that sold this product, was sold by Royal Bank of Scotland NV (RBS) in 2010. In 2015, RBS sold its Indian wealth management business to a newly incorporated wealth management firm, Sanctum Wealth Management, promoted by one of the executives at the bank, Shiv Gupta. A spokesperson for Sanctum did not respond to an email seeking comment.

To be sure, private equity is a tricky business and any investor putting money into a private equity fund is doing so with an eye on significant returns (and, presumably, with an understanding of the equally significant risks involved). Only, as experience shows, even the most sophisticated investors are often very naive.

Investors were not required to invest their entire commitment in the scheme in one shot. Most private equity funds take money in instalments, called drawdowns. According to the two account statements reviewed by Mint, Franklin Templeton called for 10% of the amount around June 2008, another 15% by the end of 2008, 20% around March 2010, 30% in December 2010 and the final 25% around August 2011. The fund house invested the initial amount in three of its liquid mutual fund schemes, pending deployment.

Then, it slowly started deploying investors’ money into companies.

All told, the scheme invested in eight companies (see table), of which two went on to list on the stock exchanges, where they didn’t exactly do well. 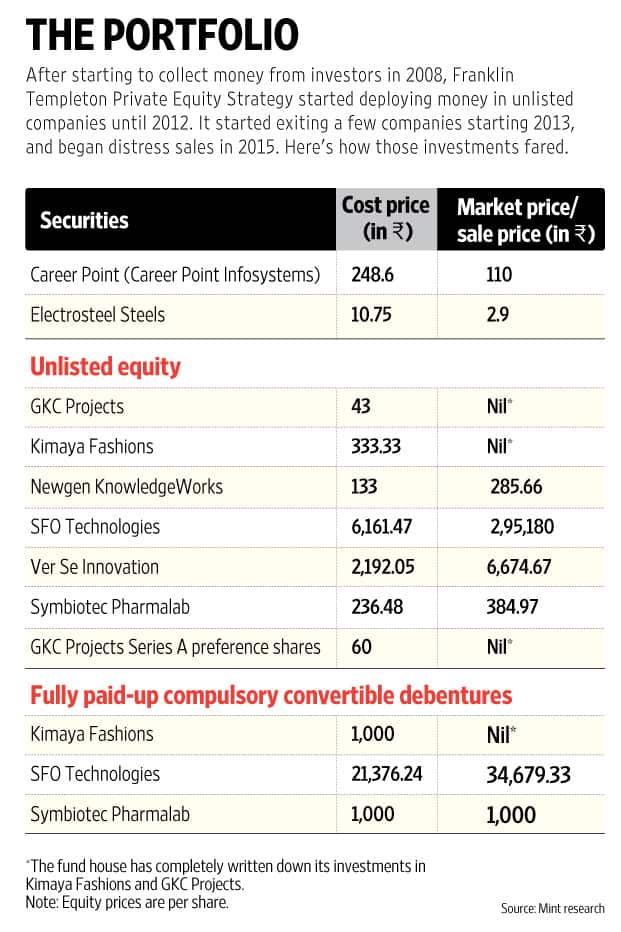 A second person familiar with developments at the fund, who also asked not to be identified, said that nearly one-fourth of the fund’s investments have been completely written off. The first person added that investors have only received 65% of their capital back.

Like anyone who has lost money, Shah believes someone else is to blame:

“At the time of selling the product, my adviser made tall claims. They showed me another of their schemes that had invested and made money in Café Coffee Day and indicated similar success in finding unlisted companies through this product as well. They sounded very positive at the time and said that Franklin Templeton was a good brand. Coming from Citibank, another organization of repute..."

Shah, who also invests in mutual funds, says he was fully aware that not all underlying investments in a private equity scheme work. “Such schemes are built in a way that even if one out of four investments works out, it would be enough to erode the losses incurred by the other three."

In this case, it didn’t work out that way.

Career Point Ltd listed in October 2010 at a price of ₹ 307.07 a share, which went up all the way to ₹ 632.65 the same day. That remains its highest price till date. The investment advisory team of Darby Asia Investors India, which managed the portfolio management service, led by managing director Deepa Sankaran, celebrated the successful listing of Career Point Ltd by cutting a cake at Franklin Templeton’s Mumbai office, according to a former employee of the fund house who was present there and recounted the anecdote on condition of anonymity.

Another employee present there, this person added, pointed out that the celebrations might be premature since the agreement between Franklin Templeton and Career Point called for a one year lock-in from the listing date, but was roundly criticized for being a party pooper.

The concerns began to play out eventually.

Another investment by the scheme was in Electrosteel Steels. Franklin bought shares in the company at about ₹ 10.75 apiece around September 2010.

Electrosteel was listed in October 2010 at ₹ 11. In November 2010, its shares reached their peak of ₹ 11.31. After that, its share price headed south. Franklin Templeton started selling these shares in 2016 at a price range of ₹ 2.64-3.86, according to Shah’s account statement.

The scheme also invested nearly one-fourth of its corpus in Kimaya Fashions Pvt. Ltd and GKC Projects Ltd through a combination of unlisted equity shares, preference shares and debentures. The fund house has completely written down this value, according to the account statement of the second investor (the percentage gain/loss figures against four of such instruments show a loss of “100%"). This investor asked not to be named. Shah’s account statement shows that Franklin bought unlisted equity shares of Kimaya Fashions at a price of ₹ 333 per share in 2011-12.

Shah says that he met Darby’s team in Mumbai and also spoke to Sankaran once on the phone. “Some of my meetings with some of the Templeton’s team members were very rough. They just put their hands up and said that my distributor (Citibank) had explained the risk factors and that I knew what I was getting into," says Shah.

Sankaran declined to participate in this story.

FTPES wasn’t the only one burnt by the financial crisis of 2008. According to McKinsey and Co.’s June 2015 report, titled Indian Private Equity: Route to Resurgence, the global financial crisis of 2008 had an adverse impact on the Indian private equity industry. According to the report, until 2007, the average realised return for private equity investments at exit was 21%. After 2008, this dropped to 7%.

“Private equity is an asset with some level of risk where you invest in private companies; like everything else, some of them do exceedingly well, some do well, some lose capital. If the underlying companies don’t do well, it’s because of economic conditions and external factors or poor management. The other reason could be corrupt practices. But, even in equity mutual fund schemes, some do well and some don’t. This is par for course," said Harish H.V., partner at Grant Thornton. He added that a fund’s performance and management fees are two separate issues.

The scheme’s extension period ends in September 2016, says Shah. At the moment, Franklin Templeton’s hope to help investors just break even (recover capital) is pinned on its investment in Ver Se Innovation. It bought into the company around 2011 and 2012 at a price of ₹ 2,192.05 per share. As on 3 August 2016, the fund has valued the shares at ₹ 6,674.67 apiece. If the fund recovers this investment, investors would end up with a total return of about 0.26% over eight years. Mint has learned that FTPES plans to seek another extension of a year, as it tries to sell the Ver Se shares. If it manages to, it will close immediately. Otherwise, it will close in a year.

But it’s still better than making a loss.