Mumbai: End of season sales have made their appearance earlier than usual this year, as retailers worry that the economic slowdown could further dent consumer demand.

Single brand retailers such as French Connection, FCUK, Regal, Guess, Puma and Fila have begun discounted sales in the last week of June, two or three weeks ahead of their usual schedule. By the first week of July, most other big brands as well as department store chains such as Pantaloon and Central will kick off their bi-annual sales.

Dipak Agarwal, chief executive officer, DLF Brands Ltd, which retails Salvatore Ferragamo, Mango and Boggi in India, said the company had brought forward its “sales, as we fear a slowdown will lead to inventory piling up in the later part of the year." 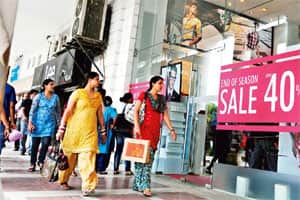 Such sales used to earlier be held for three to four weeks in August-September as retailers exhausted their old merchandise and got in new full-price merchandise in time for the festive months, beginning with Durga Puja in West Bengal.

But since the slowdown of 2008, retailers have slowly started bringing them forward. “This time the sales have started earlier than last year and will run longer, for a period of six to eight weeks. The discounts are expected to be steeper as retailers have large inventories that have to be cleared," said Saloni Nangia, president, Technopak Advisors Pvt. Ltd, a retail consultancy firm.

According to Raghav Gupta, principal, Booz and Co., a consulting firm, the best Indian retailers typically carry three months of inventory, which is way higher than the international norm of two months. He claimed there are retailers who have close to 250 days of inventory in their pipeline right now.

There is a flip-side to bringing forward sales, though.

“Post sale there is no new merchandise," said Govind Shrikhande, managing director and chief customer care associate at Shoppers Stop Ltd, which runs department stores chain Shoppers Stop, hyper-market chain HyperCity and home decor chain HomeStop. The retailer is usually the last to have a sale and has not yet got trapped in the extended sales philosophy, but is now in a quandary over whether to join the herd as customers may skip the Shoppers Stop sale altogether if it comes too late.

Consumers aren’t complaining about the extended sales and steep discounts.

“There is always some sale or the other through the year—end of season sale, monsoon sale, summer sale, Valentine’s sale, Independence Day sale, clearance sale…" said Anjum Khan, 30, who felt no urgency to buy during the ongoing sale at Regal in Bandra, Mumbai, on Saturday.

“Consumers are getting used to buying during sales. This hampers the margins as close to 40% of overall sales come from such end-of-season sales," said Gupta of Booz and Co.

To work, “the sale should pull in double the normal revenues" which will then “compensate for the margins," said Shrikhande of Shoppers Stop.

Besides seasonal sales, retailers are also looking to reduce inventory levels and are being more cautious about placing new orders. For instance, Future Group is working on reducing its inventory by ordering closer to the season. The norm in the fashion apparel industry is to place purchase orders six months in advance. Now for 30% of its fashion apparel merchandise the retailer has reduced the delivery time to two to four months in advance. “Reducing the delivery time will help us gauge the market better," said Rakesh Biyani, joint managing director, Future Group, the parent company of Pantaloon Retail (India) Ltd (PRIL), India’s largest listed retail company by revenues.

Likewise, DLF Brands has reduced its order size by close to 10%, as it cuts back on contingency buying that helps it maintain a buffer stock of merchandise in case demand is better than expected.

Pantaloon is going a step beyond sales by “bringing down prices by 3-4% on average," according to Biyani. “The drop in prices will be significant in the entry level price points which will now be at the same levels as in 2010."