In the business of law, the limited resource is not raw materials, marketing budgets or factory output capacity; it is literally the available time of a firm’s lawyers.

The hourly billing model (where a client pays lawyers at a pre-agreed rate for however many hours they worked for that client) has therefore always been popular with lawyers: it makes it fairly easy to ensure that the legal work they do for a client is a profitable use of their time and effort (and the fact that hourly billing doesn’t penalize inefficiency has also been a bonus).

In Western legal markets, clients are increasingly demanding that the billable hour be replaced by so-called alternative fee arrangements, and associate bonuses are being decoupled from their traditional direct correlation to hours billed.

“I don’t think the billable hour is dead," notes one Indian law firm partner, who declined to be named. He and a partner from another top-10 firm, who also declined to be named, said that their partners charged between around $380 and $500 per hour (around ₹ 24,000-32,000) for their time.

According to research by RSG Consulting based on a survey of more than 500 domestic and international buyers of Indian legal services, senior partners at Indian law firms charged clients on average $292 per hour for legal advice, though the rate can vary widely between firm and partners.

The billing rates can start at just $48 per hour for a senior partner at some law firms but potentially reach $1,500 in several extreme cases, according to RSG (none of the six top law firm partners Mint has spoken to had heard of anyone quoting that much to a client, though senior counsel in litigation can easily charge those amounts). 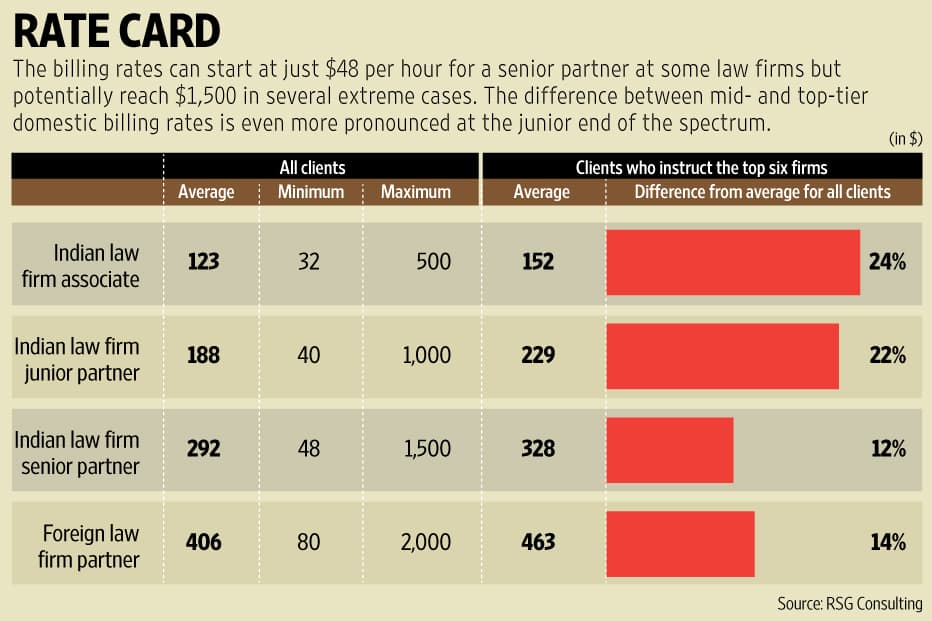 “Outside of tax and litigation, I would like to know who actually charges those top notional rates," muses one top-10 firm partner who did not want to be named.

Among premium consumers of legal services that sometimes instruct the six largest firms in India—also known as the Big Six—the average rate for a senior partner can be at around $328 per hour, or around 12% higher than the industry average.

Foreign law firm partners doing India work are at least $100 per hour higher, yet again, with averages ranging between $406 and $463 per hour (but also as little as $80 per hour at the lowest end).

The difference between mid- and top-tier domestic billing rates is even more pronounced at the junior end of the spectrum.

Law firm associates, on average, are billed out at $123 per hour to clients across the industry though at top-tier companies, which include Big Six firms, that figure is 24% higher, at $152 per hour.

A similar gap exists with junior partners, who may cost anything from $40 to $1,000, according to RSG figures for a national average of $188 an hour; among top-tier clients, the average they spend on junior partners is again 22% higher, at $229 per hour.

“The bulk of my clients are on an hourly basis, particularly for transactional work," explains Akshay Chudasama, Mumbai-based corporate and private equity partner at J. Sagar Associates (JSA) but adds that the firm may discount the hourly rates.

But the partner who said the billable hour was far from dead in India admits that “there is resistance on some transactions and from some clients" to paying hourly.

And so, discounting and bargains on top-line fees are rife.

For a client, there is a risk in instructing lawyers on hourly rates: other than knowing that the lawyer charges hundreds of dollars per hour, it is hard to know how many hours the associates and the more expensive partners will work on your mandate; the final bill can therefore sometimes be a nasty surprise.

Chudasama explains that despite the prevalence of the billable hour, in recent years clients have been asking for estimates, and private-equity clients have been requesting to only be charged at discounted hourly rates if an investment does not go through, for instance.

“The trend is to ask for estimates for specified scope of work, which works well," agrees Phoenix Legal co-founding partner Saket Shukla. “And if the assumptions on which the estimates are proposed are breached, then sensible clients do tend to discuss revised estimates."

Capping the total fees on a corporate transaction is less common, according to Chudasama, though some clients do insist on caps.

Also, in some practice areas, clients are less prone to pay hourly, he says.

“Billing has more or less moved to fixed (total amounts)," says one general counsel at a financial institution who asked not to be named, citing company policy. “Even if the fixed (fee you end up paying) is higher, the assurance exists that the fees are capped."

“However, areas such as litigation and deals with high negotiations in contracts—(such as) capital markets and banking (and intellectual property)—are on fixed rates."

“For us, the finance side is all fixed-fee work," shares the partner who had a hard time believing that top-line billing rates are actually charged. “Corporate (billing) is a mix of capped and hourly."

“That’s why corporate at most firms is much more profitable. The fixed-fee finance work can be made to be profitable but you need huge volumes to be comparable or you can justify a higher fixed fee on the basis of quality."

Another model that firms use to price themselves attractively for so-called “relationship clients", is the “blended rate", which can be as low as around ₹ 9,000, according to one top-10 partner—or around one-third the cost of a partner’s top-line hours.

“Blended means irrespective of seniority the rate is the same, so I will get charged at the same rate as the junior-most associate," he says.

The best way to make that work financially is if the bulk of time spent on the deal is by associates (but when working with close clients, partners cannot easily duck out of racking up hours on a deal, despite this straining financials and margins).

Bithika Anand, the founder of law firm consultancy Legal League Consulting, comments that with increased competition and a poor economy, “sometimes firms are barely covering their cost and barely making any profits, (thinking) ‘if I’m covering my costs with the rates that I’m charging, that’s good enough for me’".

There are very few firms that can afford to stick to top-line rates and only do high-end work by pricing themselves out of some work, she says.

Good legal advice is not cheap to provide any more either, considering top law firms are now paying ₹ 14 lakh and up per year to fresh law graduates alone, as reported in Mint on 7 April.

But if reducing your fees, you will also need to leverage your firm more highly and “push work down to as junior a level as possible", he says. A bargain-basement rate negotiated by a client may therefore not necessarily result in the best service.

So while some clients might complain that law firm partners’ billing rates are bordering on daylight robbery, an alternate reality is that heavy competition between law firms seems to be keeping prices relatively dynamic and in check.