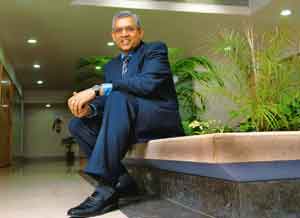 That’s a novel development in a company that will definitely be remembered by history as the employer of Infosys Technologies Ltd’s founders when they decided to set up what has become India’s best-known software services firm.

Every few months, reports surface about one or more of the three Patni brothers who founded the eponymous software company, or General Atlantic Partners, a private equity firm that has an 18% stake in the firm, selling a part or all of their holdings.

Patni has signed a term sheet with one firm before it begins a due diligence, a process that it expects to follow for three other firms, which it has shortlisted from a long list of 15 firms, chief executive officer (CEO) Jeya Kumar said. The acquisitions could happen by “January-February", added Kumar.

Kumar, who spoke to Mint over the phone, was hired in February and took over from Narendra Patni. In recent months, he has had to spend time responding to speculation that the brothers and General Atlantic are considering stake sales. “Nobody likes surprises," said Kumar who added that surprises are “often negative".

And so, even as he and his team look at four possible acquisitions, he has to put up with news reports that his own company is on the block. Employees often ask him about these stake sale rumours. “I read the same newspapers," he tells them. “What else can I say?"

An email sent to JPMorgan hadn’t been answered by the time this edition went to the press.

Patni ended the September quarter with Rs834 crore in revenue and Rs168 crore in net profit, a 1.5% and 6.5% fall from year-ago numbers, respectively. It ended the year to 31 December with revenue of Rs3,199 crore and a net profit of Rs367 crore.

None of the companies targeted are in the captive business, Kumar said. A captive is a wholly owned subsidiary of a foreign firm that does back office works for the parent company.

While JPMorgan suggested one acquisition, the other acquisitions have been brought to the table by Patni’s internal mergers and acquisitions team. The company has enough money to fund these purchases. At the end of the September quarter, Patni had $380 million in cash in its books. The firm expects to end the year with $400 million in cash, Kumar said.

Kumar insists that neither the Patni brothers nor General Atlantic is selling a stake.

“Many people come to talk to us, but there’s nothing on the table," Kumar quoted Patni as saying.

According to Kumar, General Atlantic has also confirmed not being in talks with Larsen and Toubro Ltd (L&T) for stake sale. Mint could not reach General Atlantic to independently verify what Kumar said.

However, Kumar said every shareholder who buys will eventually sell. “You buy to sell, and General Atlantic has been with the company for more than seven years." General Atlantic was among the early investors in Patni and holds nearly 18% stake in the firm. It had picked up a minority stake in Patni in 2002 for $100 million then.

Patni Computers is promoted by three brothers—Narendra Kumar, Gajendra Kumar and Ashok Kumar. Together the Indian promoters hold around 45% stake in the company, as on 30 September. The firm’s American Depository Receipts, or ADRs, are listed in the New York Stock Exchange.

“When the news (of the promoters selling) broke out, we took a very proactive step. We went and talked to them (clients) and told them we have already spoken to all the major promoters and (that) they confirmed that they are not selling any stake. But, of course, we are not in a position to tell shareholders that they should not sell," Patni’s chief executive said.

In February, when Kumar took over as CEO, shares of Patni were trading at around Rs94 each, a 52-week low. As Kumar put his team in place and took some hard decisions, the shares rebounded.

To be sure, the general rebound in the stock market helped.

Much of that change has come on the back of a focus on improving efficiencies and utilization and growing the business, but Kumar is worried that constant speculation of a stake sale by promoters or General Atlantic could have a negative impact on Patni’s ability to sign multi-million dollar, multi-year contracts.

An analyst doesn’t think so.

“I don’t think acquisition and stake sale rumours would impact the business substantially. As long as Patni can prove clients that it is adding value and has quality leaders to manage relationships," said Ankur Rudra of Noble GP, a research firm, in an interview.

Nor is there a fear that the board won’t let Kumar go ahead with the acquisitions, the analyst added. “When the board handed over the management to a professional team under the new CEO, the management was given a green signal to develop Patni’s business that also included inorganic moves to grow the business."

Utilization was improved partly through net exits, or the number of people leaving or asked to leave the firm, net of hires. In the March quarter, there were 354 net exits; this peaked in the next quarter to reach 760 and tapered off to 173 in the September quarter. Patni had 13,607 employees at the end of September.

“As a result of negative net hiring, utilization levels improved to 74.7%, which is very near the peak levels of 75% that the company achieved in third quarter of 2008. We belive further improvements in utilization would be hard to achieve and estimate that the current run rate of net employee adds is unlikely to continue," Harmendra Gandhi and Pinku Pappan, analysts at Nomura Financial Advisory and Securities (India) Pvt. Ltd, noted in their September report on Patni.

The analysts were referring to utilization levels reported in the quarter ended June. Since then, even as the utilization rate increased to 77%, the number of employee exits has come down.

In July, Patni asked 10% of its employees—the so-called bottom rung—to leave. It simultaneously offered its top performers a 7.5% raise. However, with the hiring of at least 500 trainees over the next two quarters, that Patni has already announced, current all time high levels of utilization levels is expected to be diluted.

Patni has other issues to address.

Analysts flag high revenue concentration from top 10 clients as a potential risk for it. Mitali Ghosh, Pratish Krishnan and Kunal Tayal, analysts at Bank of America Merrill Lynch, wrote in a 2 November report that compared with larger players such as Tata Consultancy Services Ltd (TCS), Infosys, Wipro Ltd and HCL Technologies Ltd, Patni has the highest such risk.

At the end of September quarter, top 10 clients contributed 51% of overall revenues for Patni while the same for TCS was 29%, 26% for Infosys and 20% for Wipro. Such high revenue concentration from relatively small number of clients could mean significant impact from negative decisions by any of those clients.

Some of the new contracts Patni is bidding for could help change that equation.

It’s size and focus also mean that Patni is no different from a clutch of so-called second-tier or mid-sized Indian IT companies. Much of the company’s revenue—as much as 65% in 2008-09—came from bread-and-butter application development services and maintenance.

“They (Patni) have been slightly weak on the sales side but the new management is attempting to fix that by inducting key personnel both at verticals and geography level," said an IT analyst at a Mumbai-based investment advisory firm who asked not to be named as he is not authorized to speak to the media.

Kumar, who is also confident of bringing down costs by $30 million in 2009-10, is convinced that Patni can leave the past behind and turn a new leaf. “At the end of the day, I am not interested in rebuilding a company, but building a new company," Kumar said.