“Coming after five consecutive quarters of losses and making a fairly healthy profit in this quarter shows a turnaround for us," SpiceJet chief executive Neil Mills told Reuters in an interview. 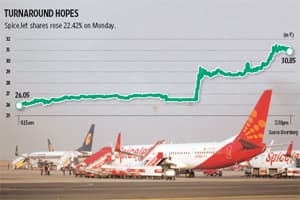 Two of the country’s major airlines, Kingfisher and state-owned Air India, are reducing capacity, which helped other carriers like SpiceJet push up fares. Kingfisher is struggling to pay off its $1.3 billion debt and is flying just a fourth of its fleet, while Air India is afloat thanks to a $5.8 billion taxpayer bailout.

“I don’t see Kingfisher adding capacity, neither do I see passengers shifting back to Air India, so I think this (profit) is very sustainable in the coming quarters," said Sharan Lillaney, an aviation analyst with Angel Broking.

Analysts had expected the carrier to post a loss of ₹ 70.75 crore for the quarter, according to Reuters.

Passenger traffic rose 26% in the quarter and average revenue per passenger jumped 24%, Mills said. SpiceJet cautioned in a statement that expensive fuel, mostly due to local taxes, and a weak rupee, combined with high airport charges, continued to hurt the sector.

State taxes of up to 30% raise the price of jet fuel, which accounts for about half of an airline’s costs. “Certainly we see that going forward, it will be more positive, but yes, there are challenges," Mills said. “The issues that we raised, particularly around high taxation levels and a weak rupee, are certainly something that will continue to be a challenge for the industry."