Bengaluru: Flipkart co-founder and former chief executive Sachin Bansal is considering raising a fund of $700 million-$1 billion for investing in startups, two people familiar with the matter said. Bansal, who is set to make $1 billion in cash after leaving Flipkart in May, could contribute up to 40% of the fund, the people cited above said. The Flipkart co-founder is also considering investing in, and running, an artificial intelligence startup, the people said. Mint could not ascertain the name of the startup.

The 37-year-old entrepreneur is likely to take a final decision about his next venture before the end of the year, the people cited above said. His next venture is keenly awaited, following his forced exit from Flipkart. In May, Walmart agreed to buy 77% in Flipkart for $16 billion. As part of the Flipkart-Walmart deal, Bansal left the company, one of the most controversial developments in the short history of the Indian start-up ecosystem. Bansal was forced out after differences with the company’s then board members over his role after the Walmart acquisition.

Bansal, who started the company with his business partner, Binny Bansal, in 2007 from an apartment in Koramangala, was the vision behind Flipkart, the big-picture man.

Though his exit from Flipkart was bitter, for millions he remains the defining face of Indian entrepreneurship, especially after it became public that he was set to pull in $1 billion in cash from the sale. 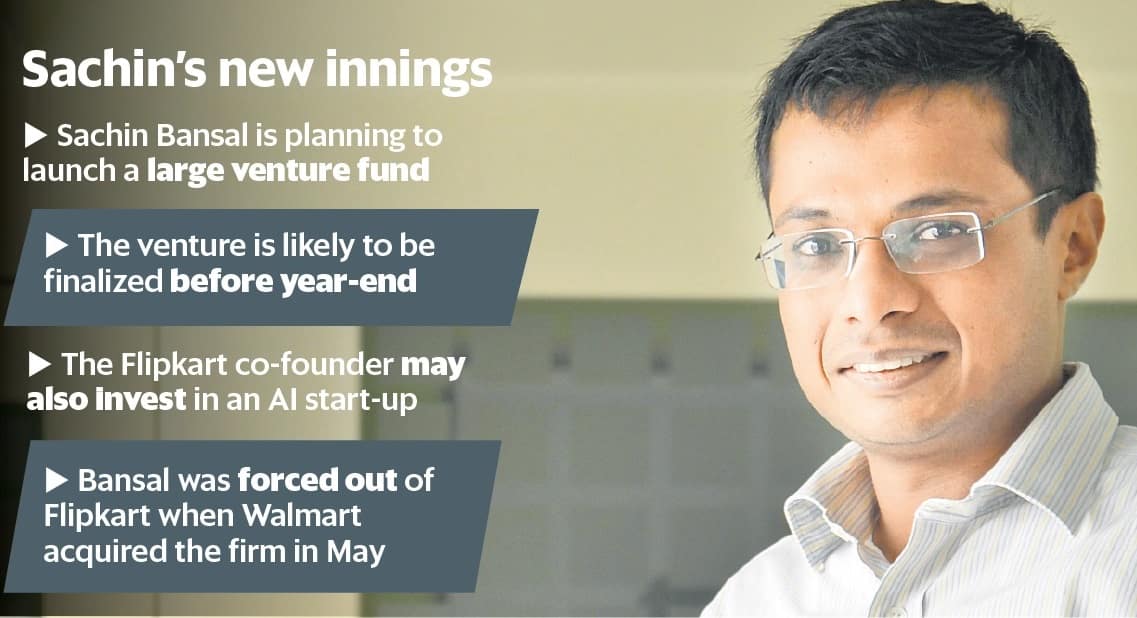 People who know Bansal said he is eager to move on to his next venture and prove his entrepreneurial skill all over again by launching either a fund or another startup.

In May, Bansal announced his exit on Facebook, saying, “Sadly my work here is done and after 10 years, it’s time to hand over the baton and move on from Flipkart."

“But I’ll be watching and cheering from the outside—Flipsters, you better continue to do a good job! I’ll be taking some long time off and focus on finishing a few personal projects which I haven’t been able to find time for. Will catch up on gaming (and see what kids are playing these days) and brush up on my coding skills," he said.