Mumbai: Tata Motors Ltd and Italy’s Fiat Spa said on Wednesday that they are ending their distribution agreement, while the manufacturing accord will continue. 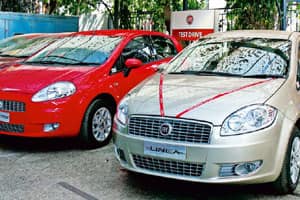 Space crunch: Fiat cars on display at a Tata Motors showroom in Okhla, New Delhi. Fiat says its decision to part with Tata Motors was prompted by increasing congestion in the showrooms. Photo: Jasjeet Plaha/HT

After two failed stints in India—one with Premier and a solo essay—the Italian company was on the verge of pulling out of India but for Fiat chief executive Sergio Marchionne and Tata group chairman Ratan Tata getting together in 2006.

Fiat joined hands with Tata Motors with the objective of using the latter’s expansive sales, service and distribution network to gain access to one of the world’s fastest growing car markets. It became evident in the first few years of the joint venture that the model was not working.

Sales at Fiat India have been sputtering. In the fiscal ended March, sales contracted 23.87% to 16,073 units, according to the Society of Indian Automobile Manufacturers (Siam).

A competing product line-up made it increasingly tough for dealers to do justice to both Tata and Fiat, an analyst at a global consulting firm said on condition of anonymity.

“Typically, dealers have a tendency to push those models that fetch them better margins. Covertly, that was driving the dealer’s behaviour," he said.

A Fiat India spokesman said the decision to go their separate ways was prompted by increasing congestion in the showrooms. “Fiat customers have not been able to experience the brand," he said.

In the past year and half, both Tata and Fiat officials have on several occasions expressed dissatisfaction over the accord not yielding the desired results and the companies planning to revisit the venture.

In September 2011, Fiat announced plans to set up so-called Fiat Cafes—one each in Delhi and Pune—to promote the brand. The company also said it had asked some of the Tata Fiat dealerships to set up separate Fiat outlets. “The writing was on the wall," said the consultant cited above.

The manufacturing joint venture between the firms will continue, the companies said. This includes using a common manufacturing plant in Ranjangaon near Pune to produce Fiat and Tata cars in addition to engines and transmissions for both the Indian and export markets and a recently announced contract to supply Fiat diesel engines to Maruti Suzuki India Ltd.

In its five years of operations, the industrial joint venture has produced some 190,000 cars and 337,000 powertrains. It will continue with these manufacturing activities as they are outside the purview of the new distribution agreement and supply cars and powertrains to Fiat and Tata.

The 178 existing Fiat-franchised Tata dealers in 129 cities will be encouraged to form the foundation of the future network. Fiat will form a separate company that will assume responsibility for all commercial and service-related activities from the current Tata-dedicated team assigned to manage the Fiat brand.

Enrico Antanasio will head the new company, said Fiat’s spokesperson. Experts said it will take the Italian car maker at least two years to establish its own network.

“They need to be more aggressive with new model launches," said Puneet Gupta, analyst at sales forecasting and market research firm IHS Global. “Only then will the dealers see financial viability in setting up Fiat dealerships."