“There is a fair amount of appetite for Indian funds, both private equity, venture capital and those investing in public markets. The number of enquiries that we have witnessed in the last six months is higher than what we had seen in the previous two years," said Rajesh Begur, founder and managing partner of law firm ARA Law.

Sentiment around the Indian economy is positive, given programmes such as Make In India, improving ease of doing business and the relatively favourable macroeconomic factors vis-a-vis other emerging economies, he added.

The improved sentiment is reflected in the number of fund managers that are in the market to raise money.

The high amount of dry powder coincides with a sharp decline in deal volume in the Indian market.

According to data from VCCEdge, in the nine months to 30 September, 945 PE deals worth $8.8 billion were recorded, which in terms of deal volume was lower by 47.3% from the previous year.

Limited partners, or investors in PE/VC funds, believe the slowdown in deal volume at a time when funds are sitting on a large amount of cash is a sign of increased discipline among fund managers.

“I don’t think the slowdown in deal volume is a reflection of either the quality or quantity of opportunity available. It is more an influence of the growing investing discipline that fund managers are exercising today as compared to the 2007-08 vintages," said Nupur Garg, regional lead, South Asia, private equity and venture funds at International Finance Corp (IFC).

Valuations too have played a part in deal volume slowdown, resulting in funds sitting on a larger amount of cash.

“There has been a significant reduction in the number of transactions, with high valuation expectations being the primary reason. People are looking for fewer deals, but good deals at right valuations," said Begur of ARA Law. 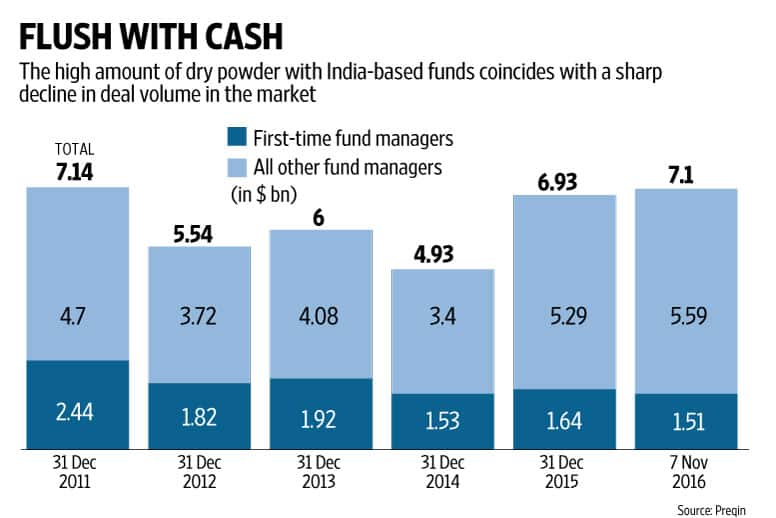 Data also shows that the top five funds with the most dry powder are holding close to $2.8 billion. These include funds such as Everstone Capital ($654.9 million), Multiples Alternate Asset Management ($577.5 million) and Nexus Venture Partners ($551.9 million).

“The number of fund managers in the market has reduced and capital is getting concentrated in the hands of fewer fund managers. The appetite for first-time funds has improved in the last few years, with some of the first-time teams bringing prior private equity experience to the table—but there are only a few first-time funds being raised," said Garg of IFC.

A significant increase in dry powder is also attributable to VC funds.

The dry powder available with VC funds has almost doubled to $3.1 billion as of November, compared to a figure of $1.5 billion at the end of calendar year 2011.

Data shows that venture capital deals saw a decline of 39% in terms of number of deals and 58% in terms of deal value for the nine months ended 30 September, having registered 267 transactions worth $1.98 billion.