Was Cyrus Mistry right? A fact check of claims in email to Tata Sons

As chairman of not only Tata Sons Ltd, but many Tata group companies as well, Cyrus Mistry was privy to granular information and forecasts that companies usually don’t share publicly.

For example, the annual reports of Tata Motors Ltd don’t mention what were the losses run up on the Nano car—which Mistry mentioned in the leaked email he wrote to the board of Tata Sons after being sacked as chairman on Monday.

On Thursday, Tata Sons said in a statement that Mistry’s “allegations are not based on facts or the true state of affairs. It is convenient to put selective information in the public domain to defend one’s point of view".

Mint reporters pored over public documents to check whether the claims made in Mistry’s email to the Tata Sons board are indeed based on facts or were baseless. Mint couldn’t verify some of the claims. Here is a look at 12 claims and what turned up in the fact check:

1. Claim: Before 2013, in order to shore up sales and market share, Tata Motors Finance extended credit with lax risk assessment. As a result, the NPAs (non-performing assets) mounted to being in excess of Rs4,000 crore.

Check: Mistry is right on the numbers, although whether the risk assessment was lax or not at the time is a matter of opinion.

Evidence: According to the audited financial statements of Tata Motor Finance Ltd, at the end of September 2014, gross NPAs climbed to Rs4,398.22 crore, compared with Rs3,000 crore six months earlier. At the end of March 2016, NPAs were Rs1,712.31 crore.

2. Claim: Tata Sons’s net worth has increased from around Rs26,000 crore to Rs42,000 crore after considering the impairments.

Check: Mistry is right in that the net worth has increased, although the figures are imprecise.

3. Claim: The (Tata Steel) European steel business faced potential impairments in excess of $10 billion, only some of which has been taken as of date.

Check: Partly right on facts which Mint could verify.

Evidence: In the four years to fiscal 2016, Tata Steel has taken an impairment charge of at least Rs24,175 crore, most of it attributed to the European assets.

4. Claim: Tata Power aggressively bid for the Mundra project based on low-priced Indonesian coal. As regulations changed, the losses in 2013-14 alone mounted to Rs1,500 crore. Given that Mundra constitutes Rs18,000 crore of capital employed (40% of the overall company’s capital employed), this substantially depresses the return on capital.

Check: Partly right. Whether the bid was aggressive is a matter of opinion.

5. Claim: Tata Capital had a book that required significant clean-up on account of bad loans to the infrastructure sector.

Check: Mistry is right, although this problem is not unique to Tata Capital.

Evidence: Tata Capital Financial Services Ltd, the subsidiary of Tata Capital Ltd which performs the retail, corporate and infrastructure lending functions, had a gross NPA ratio at the end of March 2014 of 4.52%, compared with 2.31% a year earlier. At the end of 31 March 2015, the gross NPA ratio rose to 5.7% before falling to 5.3% by the end of fiscal 2016. During financial year 2015-16, Tata Capital Financial Services created a special assets management group (SAMG), primarily to fight the rising NPAs on the company’s book and effect debt restructuring where applicable. The company’s infrastructure finance book also went through some form of reorganization.

Check: Partly right, since this depends on a set of data. Mistry is right in the sense that Tata group listed company valuations have grown at a faster pace than the Sensex (see chart). 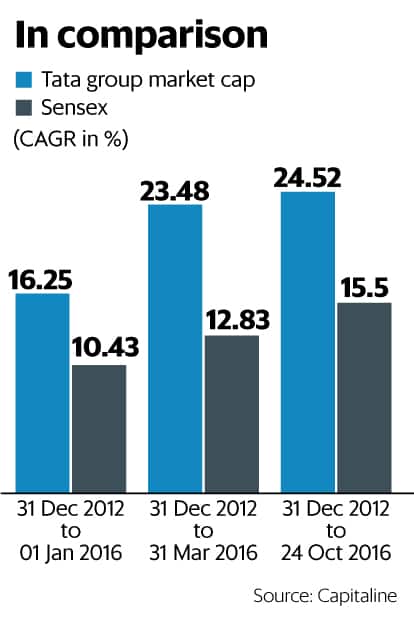 7. Claim: Many foreign properties of IHCL and holdings in Orient Hotels have been sold at a loss. The onerous terms of the lease for Pierre in New York are such that it would make it a challenge to exit.

Evidence: a) In July 2016, Indian Hotels Co. Ltd (IHCL) sold the Taj Boston for $125 million but the asset was valued at a higher rate on the company’s books. So IHCL took a Rs101.79 crore hit on its net profit.

9. Claim: Tata Sons’ board has increased the capital infusion in the (aviation) sector at multiple levels of the initial commitment… I was able to extract a promise of no debt to be raised at the level of the JV (joint venture) as well as limiting Tata Sons investment at 30% of the $30 million equity (in AirAsia). Without the benefit of time and experience to fully evaluate the proposal, I had to accept that Tata Sons would take a 51% stake in a $100 million joint venture (in Vistara).

Check: Partly right on facts which Mint could verify. It isn’t known whether there was a promise to limit Tata Sons’s investment in AirAsia.

Evidence: Of course, we can’t verify whether there was a promise to limit Tata Sons’s investment in AirAsia at 30% of $30 million, which amounts to around Rs54 crore. But Tata Sons’s filings with the Registrar of Companies show that it had investments of at least Rs78.9 crore by March 2016 in AirAsia.

Similarly, the Tata SIA Airlines Ltd joint venture, which runs Vistara, had share capital of Rs600 crore by March 2016. Tata Sons has a 51% stake in the joint venture. In September 2016, Tata SIA floated a rights issue of Rs250 crore—of which Tata Sons’s share was Rs127.5 crore. It is not known whether Tata Sons subscribed to this issue.

10. Claim: If we look at the aggregated data between 2011 and 2015 and limit the analysis largely to the legacy hotspots (IHCL, Tata Motors PV, Tata Steel Europe, Tata Power Mundra and Teleservices), it will show that the capital employed in those companies has risen from Rs132,000 crore to Rs196,000 crore. A realistic assessment of the fair value of these businesses could potentially result in a writedown over time of Rs118,000 crore.

11. Claim: a) If we were to exit this business (telecom) via fire sale or shut down, the cost would be $4-5 billion. This is in addition to any payout to DoCoMo of at least a billon plus dollars.

b) In light of all this, our strategy over the past three years has been to increase the Ebitda from Rs400 crore to Rs2,500 crore.

Check: Partly right on facts which Mint could verify.

At the end of March 2015, the consolidated balance sheet of Tata Teleservices Ltd shows a negative net worth of Rs9,789.45 crore and a total size of Rs28,671 crore. At the end of March 2016, Tata Teleservices (Maharashtra) Ltd had a negative net worth of Rs3,466 crore on a balance sheet size of Rs10,124 crore. It is difficult to figure out what assumptions Mistry made for arriving at the $4-5 billion (Rs26,000-32,500 crore). Tata Sons has deposited $1.17 billion with the Delhi high court in an escrow account as they litigate with NTT DoCoMo, which is trying to enforce an arbitration award over alleged breach of contract.

12. Claim: During my term, the operating cash flows of the group have grown at 31% compounded per annum.

Check: Partially verifiable, since operating cash flow of only listed companies is available.