Under the $1.6 billion, 10-year outsourcing contract, Wipro will provide a comprehensive suite of solutions services to the US-based Alight Solutions

New Delhi: Wipro Ltd has won its largest information technology (IT) outsourcing contract, valued at $1.6 billion over 10 years from Alight Solutions LLC, the former benefits administration and human-resources outsourcing business of Aon Plc. Starting next year, Wipro is assured of at least $150 million in annual revenue, a shot in the arm for Abidali Neemuchwala, who since taking over as chief executive officer in February 2016 has been trying to put Wipro back on the growth path. 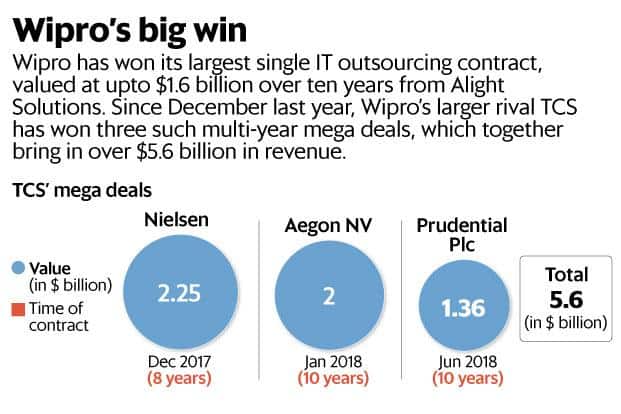 Mint first reported about the mega deal (more than $1 billion) win by Wipro in its edition dated 23 July, when the two companies were in final stages of closing the deal.

“For now, Wipro and Alight are in final stages of closing this partnership, and the duration of the contract could be extended beyond seven years, depending on the final negotiations currently underway between the two firms," the Mint report said.

A 10-year partnership with $150-$160 million in annual revenue will translate into $1.5-1.6 billion over the duration of the contract, more than the $1.1 billion order Wipro won from Canadian logistics firm ATCO in June 2014.

“We are delighted to be chosen by Alight as their long-term strategic partner in their enterprise transformation journey to bring digital experiences and offerings to employees and employers globally," said Neemuchwala. “This is a testimony to the capabilities we have built through our strategic investments in Wipro Digital, cloud platforms and cognitive platform Wipro Holmes."

Wipro’s deal win is also significant because most outsourcing deals are shrinking both in value and duration, as firms ranging from banks to retailers cut their budgets to maintain back-end technology and plough the savings into work that can help them improve business operations.

“It is a very strategic deal...there are very few companies which offer this full suite of services, under which company’s IT infrastructure is offered, and offerings through BPS and application services is given. Cloud enablement, company’s consulting practice and deployment of Holmes platform will be also seen," a Wipro executive, on condition of anonymity, told Mint earlier.

Typically, IT firms take 15-18 months to close outsourcing contracts valued at more than $1 billion, and work on this entire IT outsourcing deal was completed under Neemuchwala’s watch.

Since December last year, Wipro’s larger rival, and Neemuchwala’s former employer, Tata Consultancy Services Ltd (TCS) has won three such multi-year mega-deals, which together bring in over $5.6 billion in revenue. This has made the TCS management confident of achieving double-digit growth in the current financial year.

Wipro has not included the new business from this deal in its at-best 2.3% constant currency sequential growth forecast for the three months ending 30 September.

“This deal is not part of the revenue growth guidance for the September 2018 quarter," Kotak Institutional Equities analysts Kawaljeet Saluja and Jaykumar Doshi wrote in a 20 July note.

“This large IT deal win suggests that Wipro will surely grow faster than in the past two years, and this is heartening as this means that many of the measures taken by CEO to bring back the company to industry-matching growth have started paying," said a Mumbai-based analyst at a domestic brokerage, on the condition of anonymity. “However, Wipro needs to win more such large deals before any convincing call on if the company has turned the corner can be taken."

Although Wipro does not give a full-year growth outlook, this mega order win assures it of a better performance than last year, when it added $355.7 million in incremental revenue to end with 4.6% dollar revenue growth. Wipro ended with $8.06 billion in revenue last year.