Forex borrowings of Indian firms at five-year low in 2015

Companies borrowed $28.16 billion through ECBs in 2015, the lowest since 2010 when such borrowings were $23.77 billion, data from the Reserve Bank of India showed. ECBs or forex loans are typically long term and preferred by companies intending to spend on capital investment, new projects or for acquisition.

Patchy domestic demand has made companies wary of spending big on new projects. It is evident from the 74% fall in announcement of fresh projects during October-December, according to data from think-tank Centre for Monitoring Indian Economy (CMIE) released earlier in January.

“The lower borrowings were largely due to low demand and slowdown in projects. But on a fully-hedged basis the borrowing cost was as high as local rates for companies," said Ashish Vaidya, head of trading and asset liability management (ALM) at DBS Bank.

Further, companies that have amassed huge debts already are cautious in seeking funds to spend even on existing projects. Such firms and others as well are in fact borrowing largely to pay off previously taken costlier ECBs. For instance, in December, National Fertilizers Ltd, Indian Oil Corp. Ltd, Reliance Industries Ltd, Balkrishna Industries Ltd and Bharat Oman Refineries Ltd borrowed at least $100 million to refinance earlier ECBs, central bank data showed. Total borrowings through ECBs in December were $3.03 billion, out of which $1.9 billion went into such refinancing. 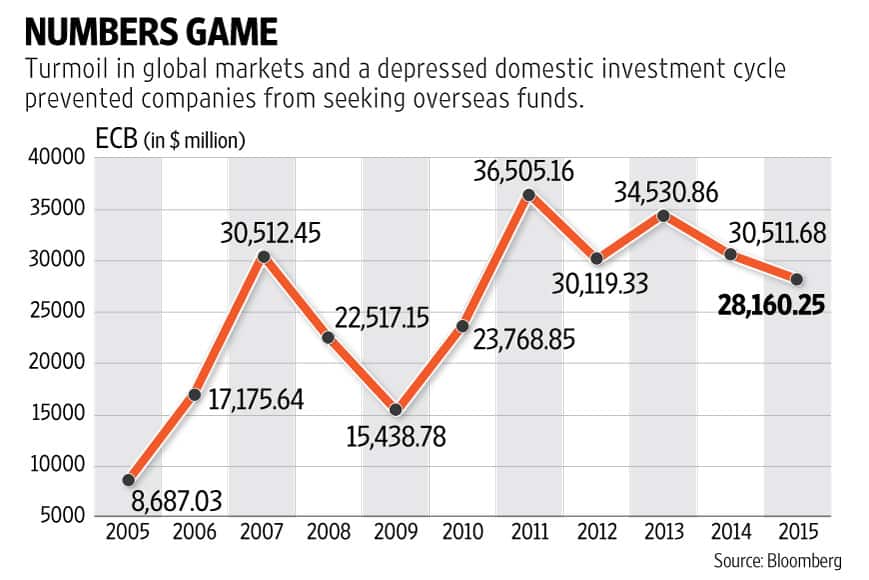 The build-up towards an interest rate hike from the US Federal Reserve that was announced in December, and data indicating a worsening Chinese economic slowdown led to a cautious sentiment towards emerging market debt last year. This, along with high costs of hedging such borrowings, kept companies from borrowing aggressively even though the interest rate on forex loans had dropped during 2015.

Such borrowings were priced at an average spread of 2% over the London interbank offered rate (Libor) during 2015.

The one-year estimated dollar to rupee premium had averaged around 6.60% in 2015, largely similar to that in 2014. Currently, the RBI allows Indian firms to borrow up to three percentage points above Libor for loans up to four years. However, the aggregate interest cost for the borrower after adding the hedging cost of around 6.9% to the average six month Libor rate would work out to around 9.4%.

The advantage of borrowing cheaper overseas has diminished as borrowings from local banks cost around 9.3%.