New Delhi: A two-day strike last week by executives at Mahanagar Telephone Nigam Ltd, or MTNL, shone the spotlight on the state-run phone services provider in New Delhi and Mumbai, which has steadily seen its revenues and profits erode in the five-six years as consumer preferences moved to cellular phones and private mobile phone service providers. 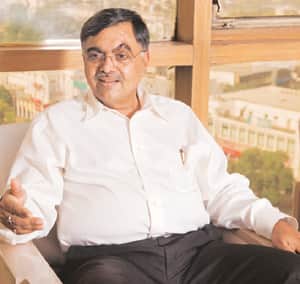 Catching up: Sinha says MTNL’s market share has increased to 16-17% in the last five years, with around 4.4 million mobile customers. Ramesh Pathania / Mint

Tell us of the impact of the strike?

There were some issues, which got blown out of proportion. But, one effect of the strike was that people realized that MTNL is still the core of communication services in Delhi and Mumbai. People would say that everybody (private telecom operators) is great except MTNL. Today they are saying that yes MTNL is still the backbone.

We told the agitating employees that there would be a permanent loss to the company if they continued.

Mumbai was not disturbed by the strike as the largest number of employees who are in group C and D (more than 40,000) did not join the strike. Only group B was on strike. They felt that their stake in the company is more and if the company starts incurring losses then their livelihood will be affected.

One major challenge for MTNL is that we have a staff strength of 47,000. When we started, the staff strength was 62,000 and my salary and wage bill is 48% of revenues. It is six or seven percent for the private companies. The removal of the pension liability by the government would be a great help. My target is to increase revenue by at least 10 to 15% over the previous fiscal.

MTNL’s revenues and profit margins have been falling…

Today in USA, employees in companies are voluntarily reducing their salary and wage bill in order to ensure the company survives.

Today, PSU employees are not paid any less that their private sector counterparts.

There are examples where we have paid as much as Rs30 lakh for the medical treatment of a mid-level employee’s wife. This cannot be done in the private sector.

Being a listed PSU, our financial implications are more as we have to make a provision for gratuity, pension, provident fund etc on an actual basis.

Whenever monopoly is taken away, the incumbent is bound to lose customers, whichever country you look at, be it the US, UK or France.

And, subscriber numbers have been declining too…

We came to the market in 2003, no one was ready to take a mobile connection of MTNL despite our reduction in the price. Because of us the tariff of the private operators came down from Rs16 a minute to Rs2.40 a minute but still take off was not there – our market share was around 3-4%.

But in the last five years our market share has increased to 16-17% we have snatched this from the private operators and today we have more than 44 lakh mobile customers.

As far as fixed lines go, we have around 20 lakh fixed lines in Mumbai but that had come down significantly. Earlier to have a fixed line was a status symbol and nobody was willing to surrender extra connections. Today with the coming of the mobile, customer feels why should I pay rental for the fixed line – many surrenders have also taken place due to the on-demand availability adding to the redundancy.

Others are also offering fixed lines as well. They have a smaller number and are therefore able to take more care and as a result we have lost some market share.

But our numbers are growing still. For every 100 lines surrendered we were giving around 80 new lines also. There was a net loss but that has been arrested in Delhi because whatever surrenders had to take place have taken place.

Now our broadband growth is driving fixed line growth. For broadband, nobody had expected that we would sweep the market.

Today I am giving 700 to 800 broadband connections per day in Delhi and Mumbai and still there is a waiting list. One factor for the growth of broadband is the lowest tariffs in the market. I am still making money by offering the service at Rs99. Whatever I lost in terms of fixed lines has been more or less recouped.

GSM revenue has grown from ₹ 187 crore in 2003-04 to ₹ 900 crore this year and also another ₹ 400 -500crore I am getting out of broadband. This additional revenue is compensating for the loss of fixed line revenue.

Delhi and Mumbai are the most saturated markets so growth is limited as compared to the other operators who are growing in other areas – in B and C circles. In the markets that we are present in, we are competing with them neck to neck in subscribers and revenues.

Even on the broadband front, if you compare like to like, our growth is manifold as compared to them. We have about 700,000 broadband subscribers. There were some problems with capacity but that has been resolved.

How are new services such as third generation, or 3G, mobile phones and IPTV (Internet protocol television) doing and what are you doing to drive those markets?

Today we cover the whole of Delhi with 3G network. When we launched, it was only in the NDMC areas. Uptake so far has been miniscule, but now there will be significant uptake. We have about 300 connections have been given but awareness is still low.

Initially when we launched broadband, uptake was not much but it picked up significantly.

We will come out with new tariffs for 3G soon and hopefully take-off will be quite fast.

MTNL was the first to start IPTV. MTNL was following the private sector in terms of bringing technology but now MTNL is the forerunner. There were initial hiccups but now it is working well.

But there have been many issues like the content where the broadcaster would not give us all the channels or they would not reduce their price. Some broadcasters had even taken huge amounts of money from our partners but not given us the channels. We took up the issue with Trai (Telecom Regulatory Authority of India) also.

IPTV is maturing and there is a waiting list. We have about 10,000 IPTV connections in Delhi. Because of the waiting list we are not doing the marketing. That is being done by the partners while we facilitate in terms of network, which we have done.

You have announced a capital expenditure of Rs1,750 crore. What will this include?

This will mainly be used to spread 3G wherever capacity is needed. Then we are talking about NGN (next generation network) switches and then we are also talking about submarine cables.

The TDSAT order recently asking the government to take back additional spectrum given to you was recently stayed by the Supreme Court. What would happen if the TDSAT order is upheld?

We have already installed our equipment for those frequency bands that were allocated to us. It takes time for us to procure equipment and once we have done that then it becomes very difficult for us. We were given spectrum late and that too in the higher frequency bands where capex and opex (capital expenditure and operating expenditure) are higher as compared to what was given to the private operators.

Why did you decide against going into the Sri Lankan market through a stake in Suntel?

We are on the look out for overseas acquisitions. When you try to acquire in a mature market, the growth potential is less and you have to pay huge amounts. As a PSU we have some constraints in the sense that whenever you acquire overseas, the acquisition is always done on the enterprise value. In the government system, if you invest money and you are not getting a return on that, then it is not acceptable. Whereas if it is based on the enterprise value then you can dilute your share and here diluting as well as acquiring shares is difficult.

Then, you can get a licence based on auction. We participated in Saudi Arabia and the auction went up to more than $6billion. We went for the bid in Kenya and we were the third highest bidder. The second highest was Reliance. The first two decided against taking it and they came to us telling us to match the highest bid of $125 million. We had bid $65 million and we said we are ready but not at your price. We would go for a realistic bid only.

We are looking for attractive options and are willing to take any attractive offer. Funding is not an issue.

Does a merger of MTNL with BSNL make sense?

The merger issue is the prerogative of the owner. If the government decides to merge the two then they will do it. There are some issues. If you compare BSNL and our salary and wage bill then you will see a huge difference. With 50,000 employees our bill will be much higher that them because their pension is paid by the government.

Our employees are agitating that their pension should also be borne by the government. If that is done, then my profitability immediately increases. The huge pension is a permanent liability for the company.

At the time of creation, the employees were offered a higher scale of pay to join MTNL. With the sixth pay commission, that issue has been resolved but the pension issue remains unresolved for nine years now.

What about a demerger of the tower business, real estate business?

We don’t see the advantage of a demerger of the towers. The asset is lying in the company. Private operators have an interest in demerging their towers businesses as they can dilute that stake to raise funds. We can’t do that in MTNL as government holding is 56%. There is no change in the value whether it is demerged or not.

We can do sharing today also and we are already sharing with other operators in a barter system. We are also putting it on rent and if somebody wants we can do it.

On real estate we are also taking a lot of steps. We are developing our plot in Noida through a partnership basis and we have taken almost ₹ 30 crore advance. They will construct the building and give a certain portion to us and retain the rest.

Because of the fall in the realty market they are not able to raise funds and so we are waiting for the market to go back up.

What are your marketing strategies for the fixed line and mobile line?

The fixed line is our gold mine. We are going to leverage it by offering more services around it. We can offer Wifi in a fixed line subscriber’s home. A 3G subscriber can latch the instrument to the fixed line so as to pay a far lesser amount as the data will come via the fixed line.

There are also a host of value added services we are going to provide like IPTV, VoIP (voice over Internet protocol), and surveillance cameras that can be viewed over a network.

For mobile, we will definitely have some advantage of 3G as that provides data capability that is much faster. The ability to offer 3G services allows us access to subscribers with higher average revenues and number portability is also coming. We expect a significant increase in our subscriber numbers due to number portability especially for people with dual SIM (subscriber identification module) card phones. They can retain their old number as well as use our 3G SIM card for data operations.