Mumbai: Indian drug maker Sun Pharmaceutical Industries Ltd’s race to acquire Israeli pharma company Taro Pharmaceutical Industries Ltd has taken a new turn. Templeton Asset Management Ltd, which holds 10% stake in Taro, has decided to withdraw from Taro’s appeal against Sun Pharma, which holds 34% stake in Taro. Mark Mobius of Templeton said in an interview that it is important to hasten the takeover of Taro by Sun Pharma, adding that his firm will continue to hold on to its stake in Taro. Edited excerpts: 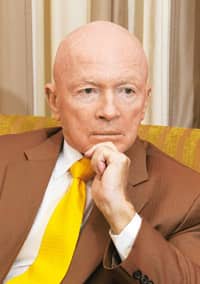 High stakes: Templeton Asset Management chairman Mark Mobius says there is need for clarity regarding how Taro is being run. Munshi Ahmed / Bloomberg

You are now backing Sun Pharma by withdrawing from Taro’s appeal against it. What is the reason behind this U-turn in your position that you have held for the past two years?

It is not a matter of backing Sun or anyone else. It’s a matter of taking action as a result of the proposal by the current Taro promoters and controllers to absolve their directors from any responsibility for the audit of the accounts of the company. So as soon as that action, their action to call a meeting to do that, as soon as that took place, we were quite alarmed as you can imagine, because if directors cannot take responsibilities to the account, then obviously something could be wrong. I am not saying something is wrong but I am saying something could be wrong.

So we decided that it is very important for us to accelerate the process of taking over of Taro by Sun. As you know, an agreement was reached between Taro and Sun for the Taro controllers to sell control of the firm to Sun. The Taro controllers changed their mind and wanted to go back on that agreement. Our involvement was whether a special tender offer was necessary rather than a regular tender offer and that complicated the issue that was before the court in Israel. We decided to withdraw that action so that the process could be accelerated and Sun could more quickly take over control of the firm. That’s where we stand now.

You have said Taro’s condition is deteriorating and that the court must remove barriers of transfer of control. Could you explain?

First of all, I am not saying the condition of Taro has deteriorated. What we are saying is that we don’t know what the conditions are and if the directors want to absolve themselves of responsibility, we don’t know what that means. Up to now the directors have issued financial statements which look very good and which paint a very rosy picture about the company, but those accounts are not audited, so we just don’t know. And to be cautious and prudent, we decided that it’s best that as soon as possible Sun take control of the company so we can get clarity because in that sense Sun and ourselves are on the same page. We are both interested in ensuring that there are audits of accounts and there is clarity regarding how this company is being run and what the accounts look like.

Are you now saying that the special tender offer is withdrawn?

That’s correct. We have withdrawn our motion for a special tender offer.

What do you propose to do with your holding in Taro?

We don’t have any stance other than to hold on to our shares in the belief that the company has great potential, and with the right management we will be able to realize the much higher price in the future. And we believe that with Sun’s management, this could happen and we could see much better price going forward.

Are you in conversation with other institutional shareholders? What is the likely timeline for a legal outcome of this case?

We are in contact with other shareholders and we are urging them to vote against this motion to have this special meeting to absolve the directors. We are also hoping that the legal action will be over as soon as possible but I wish I could tell you when. This has being going on for quite some time and it’s really in the hands of the Israeli courts.