Mumbai: Walt Disney Co. acquired a controlling interest in UTV Software Communications Ltd, one of India’s leading media and entertainment companies, through a buyout that will enable the US company to further establish itself in the South Asian country’s television and movie business. 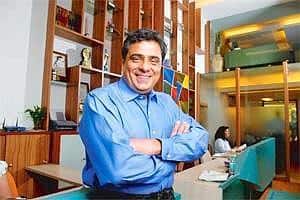 UTV co-founder and CEO Ronnie Screwvala, who’s been running the company for more than two decades, will be staying on as managing director of the company, which will be renamed The Walt Disney Co. India. He will report to Andy Bird, chairman, Walt Disney International. This marks the culmination of a process that began with Disney taking a 14.9% stake in UTV in September 2006.

“I cannot see a flaw in the plan," said Daljeet Singh Kohli, head of research at India Nivesh Securities. “The investors get to exit the company which has been accumulating losses over a period of time. They get a huge premium for their shares. The Indian promoters make a chunk of money on the deal and Ronnie Screwvala retains control as managing director. Disney gets a huge footprint in one of the fastest-growing economies."

For the quarter ended September, UTV Software reported a loss of ₹ 7.6 crore on revenue of ₹ 99.2 crore. It is yet to release December quarter results. The buyout process is still underway and some investors are holding on to their stakes in the hope that the offer price of ₹ 1,000 a share will be raised, said Amit Sharma, analyst at Wallfort Financial Services Ltd. UTV rose 0.52% to ₹ 1,061.50 on Wednesday on BSE. The benchmark Sensex rose 0.62% to 17,300.58 points. In the past one year, UTV has gained 124.11%, while the Sensex has lost 4%.

UTV has interests in television broadcasting, gaming and film production, having made movies such as Rang De Basanti and Rajneeti. Its channels include UTV World Movies, UTV Bindass and UTV Action.

Disney will become a key contender in the Indian television market along with other overseas broadcasters such as Sony and News Corp., jostling for viewership with local media groups such as Zee Entertainment Enterprise Ltd, according to Jehil Thakkar, executive director, KPMG Advisory Services Ltd.

Disney aims to become one of India’s leading broadcasters reaching more than 100 million viewers weekly in households across country. It will also gain a significant presence in digital media with the addition of UTV’s Indiagames Ltd, the mobile gaming company.

“Increasing our brand presence and reach in key international markets is a cornerstone of our growth strategy," Walt Disney’s Bird said in a release. “This acquisition expands our footprint significantly and allows us to more effectively build, monetize and brand multi-platform franchises, and deliver a rich library of content to the world’s second largest population."

Screwvala said in a release: “In combining the creative capabilities of each company, we will integrate a large stable of vibrant brands and franchises in the... entertainment space."

Apart from the TV presence, the acquisition will make the company one of India’s leading film studios, producing movies in India under the UTV and Disney banners, said Kohli. Disney could also launch several more channels in India with content generated overseas besides bringing in Disneyland amusement parks or Disney stores, he said. It already broadcasts Disney, Disney XD and Hungama channels in India.

In the short term, Kohli doesn’t see a big change in what UTV does but he expects Disney to bring operations more in line with global strategy in the long term.

Disney has five business segments—media networks; parks and resorts; studio entertainment; consumer products and interactive media. It’s a Dow 30 company and had annual revenue of about $40.9 billion in its last fiscal year.

UTV has stayed away from the crowded Hindi general entertainment channel (GEC) space, which is cost- intensive and involves risk, Kohli said. “It’s likely that Disney will continue to follow this strategy."

An executive at a leading Hindi general entertainment channel does not see the deal having an impact on Indian television, considering most major global broadcasters are already in the country and want to expand.

“Although the UTV deal puts Disney on the map, the flipside is that UTV channels reach out to niche audiences and are not very profitable. Even with Disney gaining full ownership control, I fail to see what difference it could make unless they wish to (overhaul) the channels and start from scratch," the executive said.