Why Saama sold its Snapdeal stake

Last November Ash Lilani did the unthinkable by selling his firm's stake in Snapdeal. As summer turns to winter in India's start-up market, the decision may have been perfect timing

How do you like the view?" asks a beaming Ash Lilani as he strides into the conference room at Saama Capital India Advisors’ Bengaluru office on a February afternoon. The “view" Saama’s co-founder is asking about is a trophy wall of sorts adorned with plaques that sport the logos of the venture capital firm’s current and past portfolio companies.

Some are more familiar than others. Snapdeal, for instance. Its plaque is particularly intriguing because the e-commerce firm, one of India’s celebrated technology start-up unicorns, recently became part of Saama’s past portfolio.

A number of questions run through our minds: aren’t unicorns, start-ups valued privately at a billion dollars or more, worth the wait any more?

There’s a backstory to the questions.

In early November, Saama cut a deal with Ontario Teachers’ Pension Plan (OTPP), Canada’s largest professional pension fund, to sell it entire stake in Jasper Infotech Pvt. Ltd, the Delhi-based company that owns Snapdeal. The sale was profitable enough for Saama to return its second fund to its investors, said a person familiar with the transaction, on the condition of anonymity. Lilani confirms the stake sale but declines further comment on the transaction.

The fund is Saama Capital II, launched in 2012 with a $26 million corpus. It invested $2 million in Snapdeal.com’s Series C round. Overall, Saama Capital II invested about $4 million in the e-commerce company (it later also participated in the Series D round).

At any other time, the stake sale would have been a routine liquidity event for a venture capital firm. But Snapdeal wasn’t just another company in Saama’s portfolio. Less than three months before the OTPP deal, Snapdeal’s valuation had skyrocketed 140% to a reported $4.8 billion. This was on the back of a $500 million funding round led by NYSE listed e-commerce giant Alibaba Group Holding Ltd, Taiwanese contract manufacturer Foxconn Technology Co. Ltd and existing investor SoftBank Group.

Then, three months after Saama sold its stake, the valuation vaulted again—this time to a reported $6.5 billion. This was due to a new two-part deal. The first part involved OTPP buying a portion of Sequoia Capital India’s stake. The Menlo Park, California-based venture capital firm had snagged a reported 3% stake in Snapdeal in April 2015 when portfolio company Freecharge merged with the former.

“At the time of the deal, Sequoia incurred a tax liability. They wanted some liquidity to pay for the liability," says a person familiar with the transaction. The details of the transaction have not been made public.

Sequoia did not respond to email queries from Mint.

The second part of the deal was the infusion of fresh capital by two new investors. Singapore-based Brother Fortune Apparel Pte Ltd (advised by Mumbai and Singapore-based venture capital firm Iron Pillar) invested ₹ 335.25 crore (about $50 million), according to a regulatory filing by Jasper Infotech. The filing also shows that Bennett, Coleman & Co. was issued warrants worth ₹ 25.49 crore. The Economic Times reported the firm’s investment at between ₹ 250 crore and ₹ 300 crore (between $37 million and $45 million). Bennett, Coleman & Co. publishes The Economic Times, which competes with Mint.

Snapdeal did not respond to email queries from Mint.

“Snapdeal will grow bigger, and its value will potentially grow over time. There’s no doubt on that front. The obvious question is: if it’s going to grow, why not stay invested?" says Lilani. He puts it down to a judgement call. “The opportunity for exit or liquidity is always unknown. Fund managers have to make a call on what timing is best for them and their investors (limited partners)," he says.

Incidentally, Saama isn’t the only early-stage investor that’s opted to cash out of unicorns lately. 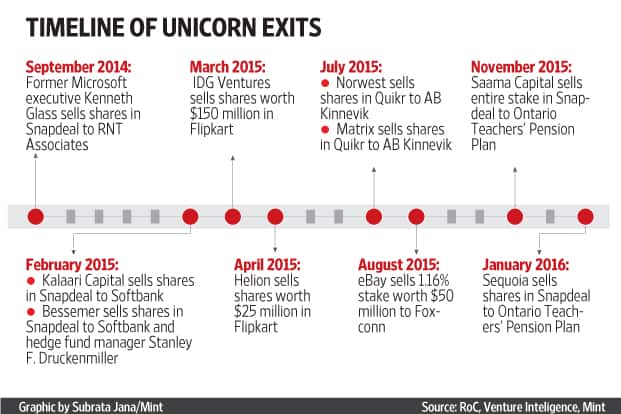 NVP India managing director Niren Shah had confirmed the sale in a November interview with Mint, but did not disclose details of the transaction. NVP had entered Quikr in 2010 when it led a $6 million Series C round in the firm and invested some more in subsequent rounds.

Matrix Partners seedfunded Quikr in 2008 and scaled up its investment over later rounds. Managing director Rishi Navani declined to comment on details of the transaction but confirmed the sale.

In a disclosure to the stock exchanges in July, Kinnevik said it had acquired additional shares worth $20 million in Quikr India through a secondary transaction.

In all, 10 early-stage investors sold parts or all of their stakes in such companies over the past 17 months. (See graphic)

As it turns out, Lilani’s timing was perfect. By the time Saama and OTPP signed on the dotted line, summer was turning to winter in India’s startup market.

In September, Mumbai-based food ordering service TinyOwl Technology Pvt. Ltd, backed by Sequoia, Matrix and NVP, started to lay off people as it tried to restructure it business. It was in the market to raise $50 million in fresh funds at the time. It eventually fired more than 300 people but was able to raise only $7.5 million in a bridge round from its existing investors.

The wave of layoffs by startups continued into October. Mumbai-based grocery e-tailer LocalBanya suspended operations and fired a reported 40% of its staff.

The big upset was delivered by online restaurant discovery platform Zomato Media Pvt. Ltd. The Delhi-based unicorn, whose investors include Sequoia and Naukri.com promoter Info Edge India Ltd, cut its 3,000-people strong workforce by a reported 10%. Days after the layoffs became public, Zomato co-founder and chief executive Deepinder Goyal told employees in an internal email (which leaked to the media) that for the first time in five years, the firm was behind the revenue targets it had promised investors for the financial year ending March 2016.

It wasn’t time to panic yet, but by the end of October, whispers of a valuation correction in the start-up market had started to gain ground, chiefly because of unexpected developments in China.

In August, China, the world’s second largest economy, devalued its currency by 3%. The devaluation was aimed at boosting the country’s exports, which had declined 8.3% in July. The move led to widespread turmoil in global stock markets, including India. As public market valuations dropped, tremors were subsequently felt in global startup markets. In November, a number of mutual fund managers such as Fidelity Investments, BlackRock Inc. and T Rowe Price Group Inc. marked down the value of their investments in a bunch of technology start-up unicorns.

The unicorn markdown crisis, as it came to be known, didn’t immediately hit Indian shores. However, the turmoil in the public markets had started to take its toll. If some companies were laying off people, others were struggling to raise fresh capital.

Commonfloor, another frontline Bengaluru based start-up, in the online property search business, was also struggling to raise funds. It was eventually acquired by Quikr in January in a stock swap deal.

Fundraising challenges aside, Ola and Commonfloor had one other thing in common—Tiger Global Management Llc.

New York-based Tiger Global, which manages an estimated $20 billion in hedge funds and venture capital funds globally, had almost singularly contributed to taking start-up valuations in India to unprecedented highs. It had alone pumped in an estimated $2 billion-plus into India, often closing deals within days.

Tiger Global’s unfettered dealmaking encouraged a host of global hedge funds to follow suit. Mint reported earlier this month that in just 15 months, till September 2015, Indian start-ups raised $9 billion in a funding rally led by hedge funds and other later-stage investors such as Japan’s SoftBank.

By December, the China scare prompted hedge funds to all but withdraw from start-up markets. The big scare for India’s start-up market though was Tiger Global’s change in stance.

Mint reported on 3 December that Tiger Global Management, concerned that the generous valuations it had handed out earlier may not pay off, was taking a backseat on big-ticket start-up deals India. What was more worrying for its India portfolio of 50-odd start-ups, particularly Flipkart Ltd, India’s most valuable unicorn, and Ola, were two deals that it had struck in the US. In November, it upped its stake in Amazon.com Inc., which is snapping at Flipkart’s heels in India, investing about $1.1 billion to buy an additional 2.44 million shares in the Nasdaq-listed e-commerce giant. Then, according to a Bloomberg News report, it picked up a stake in San Francisco-based cab hailing service Uber Technologies Inc., which competes with Ola.

Lilani doesn’t specifically link the Snapdeal exit with the ongoing market correction. “Snapdeal was three years into our fund (Saama Capital II), when the OTPP offer came along. Who knows how long it would be before another opportunity like that came along," he says.

Being able to return its second fund was a big milestone for a mid-sized venture capital shop like Saama. The fund’s portfolio still has seven growing investments, including online jewellery store BlueStone.com and tea retail chain Chai Point. More importantly, the exit gave Saama the runway to raise a third fund.

“We hope to close out the fund some time mid-year," Lilani says without disclosing the target corpus.

With Saama Capital III, as the fund is dubbed, Saama Capital is expected to have about $150 million in funds under management. “I have seen two market downturns earlier. We believe it’s a great time for early stage investing," he says.

Indeed, Snapdeal was an investment Saama made during a downturn. In 2012, when the start-up market experienced a short but less severe downturn, Snapdeal’s founder and chief executive Kunal Bahl was in the market for his Series C round. He was also in the middle of transitioning the company from an inventory-led model to a marketplace. Saama put $2 million on table, before even some of Snapdeal’s existing investors had committed to the round.

Using that as a catalyst, Bahl eventually raised $50 million in that round.

Does he think any of them will turn into unicorns? Lilani chews on that question for about 30 seconds before responding.

“Unicorns are anomalies. We didn’t even know the term existed until two years ago. We look for companies that can get $100-300 million exits in three to five years, and we can multiply our investment 10-15 times," he says. However, he’s quick to add that Saama has been fortunate that Snapdeal and mobile payments player Paytm, the other unicorn in its portfolio, have achieved unicorn valuations.

That’s also why, he continues, it’s important for venture capital firms to right-size their funds.

The way the math works, he elaborates, is that venture capital funds are usually expected to return three times the fund corpus to their limited partners.

“If you raise $400 million, for instance, you have to return $1.2 billion. That means, you need one, maybe two unicorns in the portfolio if you’re that large."

The math has worked out well for Saama so far—raise small funds, earn supernormal returns.

Plus, Lilani still has one more unicorn to trade—Paytm, whose valuation is inching towards $4 billion.