Ola, TaxiForSure and Uber are offering low fares to users and higher ones to drivers as they seek to build loyalty and the largest fleets

Bengaluru/New Delhi: The discount war between online marketplaces that has customers cheering and traditional retailers up in arms is being replayed in the taxi business where cab booking companies such as Ola, TaxiForSure and Uber are offering low fares to users and higher ones to drivers as they seek to build loyalty and the largest fleets.

Much like Amazon.in, Flipkart or Snapdeal, the taxi booking companies are funded by investors or a well-heeled parent, and millions of dollars are being burnt on deep discounts.

For instance, a customer may pay ₹ 280 for a ride from the Delhi airport to the city centre on Ola or Uber; the driver could actually receive ₹ 500 for this from the company.

After e-commerce, “the taxi booking space is seen as the next big thing by investors", said Aprameya Radhakrishna, founder and director at TaxiForSure, owned by Serendipity Infolabs Pvt. Ltd. “The goal is to replace car ownership, so it’s a very large, mostly unorganized market worth billions of dollars over time. It’s already growing exponentially and there are no clear market leaders, so there’s room for all current incumbents to prove themselves."

Out of these, Ola has raised about $276 million, including $210 million from Japan’s SoftBank Group last month. Uber, one of the most valuable start-ups globally, is in talks to raise $1 billion in fresh funds, after it received $1.2 billion from Fidelity Investments, BlackRock Inc., Google Ventures and others in June, according to media reports. It isn’t clear how much Uber has invested in its Indian operation. 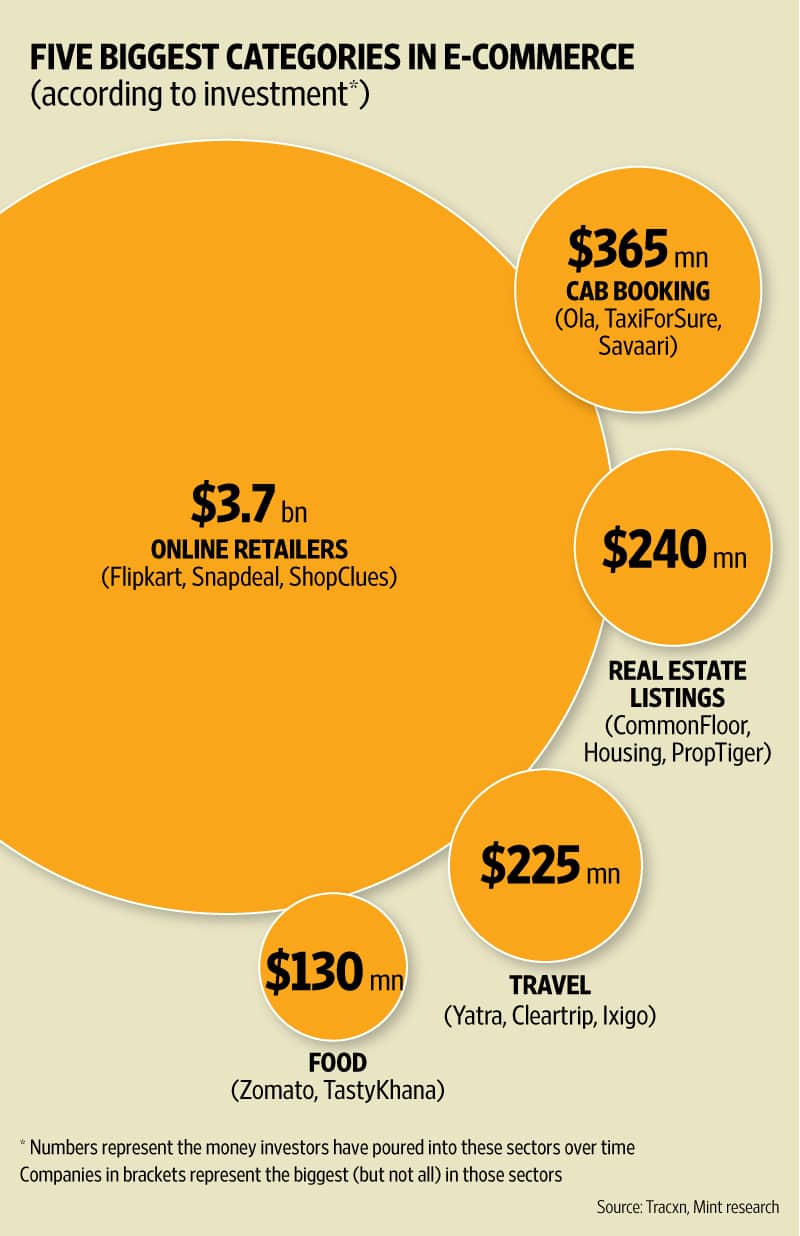 Ola and TaxiForSure have emerged the leaders among local cab-booking start-ups, and along with Uber, these companies are grabbing significant market share from Meru Cab Company Pvt. Ltd.

Market leader Meru was the first company to succeed in a fragmented space. It provided cabs for airport drops and pick-ups, and became popular among business travellers.

The company owns many of its cars but is trying to move to an asset-light model by encouraging its drivers to buy cars. Uber, Ola and TaxiForSure don’t own cars; they simply connect customers with drivers through their apps and charge a commission on every ride. According to several industry executives and 10 cab drivers, Ola and Uber charge a commission of 20% on every ride while TaxiForSure charges 13-14%.

Only, right now, no one is really charging commissions.

Instead, they are offering cheap fares to customers and compensating drivers themselves.

Uber and Ola work with individual drivers as well as taxi operators and are engaged in a fierce battle to get more of both to use their services. Many drivers sign on with several services, experiment, and then use the one that gives them the most money. Rides are accepted by drivers on apps, much the same way customers choose rides. TaxiForSure works only with cab operators and not with individual drivers, but its model remains the same.

Uber offers the most attractive incentives, according to 10 drivers Mint spoke to. The company pays them extra for achieving a certain number of rides and for keeping its app open throughout the day, they said. The logic is simple: the more you work with Uber, the more you earn.

Ola also pays extra cash to drivers for doing more rides, but doesn’t pay them to keep its app open, said the drivers, who work with both the cab companies. Unlike Ola, which has fixed fares, Uber significantly increases prices when demand is higher than supply, sometimes charging customers twice or more the regular fares. This also helps boost driver earnings.

Uber, Ola and TaxiForSure have all tapped into the growing use of mobile phones for buying products and services. Their asset-light model also allows them to increase supply at a faster rate than Meru, which has lagged rivals in improving its technology.

Uber, which entered India last August, is now present in 11 cities including Bengaluru, Delhi, Mumbai and Kochi. The company’s smooth mobile app and cashless payment offering were a hit with customers but Uber was eventually forced to switch to a payment wallet this month after the Reserve Bank of India (RBI) insisted on a two-step authentication process for all card transactions.

Wallets are digital dockets that are filled with money using debit or credit cards or net banking; customers then use them to pay for products online.

“India has been Uber’s fastest-ever ramp-up and it is now the second-largest market in terms of cities after the US," said Bhavik Rathod, general manager at Uber Bengaluru. “We think the potential is huge and hence we’re working very hard on localizing our solution according to what Indian consumers want. We’ve launched the Paytm wallet as well as a new product Uber Go this month specifically for India."

Uber orders are growing by more than 35% on a month-on-month basis, Rathod added.

Some analysts say the forced switch may hit Uber, but Rathod said it would significantly increase the potential user base for the company in India. Credit card penetration in India is just around 3% while more than 600 million people can potentially use Paytm’s wallet, he said.

The scorching growth of cab booking services necessitates the addition of thousands of drivers, some of whom are not well-educated or trained to provide the standard of service that these companies promise. According to the social media accounts of Ola, Uber and TaxiForSure there are hundreds of complaints on a monthly basis about smelly cars, rude driver behaviour, cancelled rides and other such customer hassles.

According to Airwoot, a Delhi-based company that helps brands provide customer support on social media, the number of support queries directed to taxi brands via social media rose 200% in the last three months—coinciding with the time the companies started offering deep discounts.

About 40% of the queries are about cabs being unavailable, 27% about bookings being cancelled and 15% about the apps not working, said Airwoot’s co-founder Saurabh Arora.

Service is important but for now, it is the ability to raise money, to fund discounts and expansion, that will decide the winner, say analysts.

“Today, the demand outstrips supply by such a huge margin that I don’t think service is going to be the key differentiator," said Abhishek Goyal, co-founder of Tracxn. “Raising capital, ramping up supply and making the experience as fast and seamless are much more important. And on these metrics, currently Ola and Uber clearly look like they will be the dominant forces within the next two years or so. The others, including Meru, will have a very tough time and consolidation is inevitable."