Mumbai: China, the US and India—that will be the pecking order of the global automobiles market by volumes by 2015, according to Rothschild, the UK-based global financial advisory firm.

Currently, India is the sixth largest market after China, the US, Germany, Japan and Brazil. The market, which includes cars, trucks and auto parts, is expected to be 3.5 million units by the end of 2011-12, Vikas Sehgal, global head of automotive industry at Rothschild, said at a press briefing.

Auto makers in India will make thrice the investment in creating capacities in the coming decade than what they have done between 1983 and 2010, Sehgal said.

Car production capacity in the country is expected to increase from 4.8 million units in 2010 to 12 million in 2018. These numbers will roll out from 30 new factories in eight years. 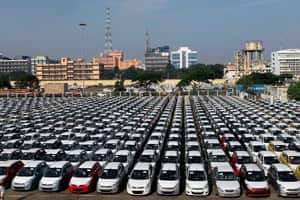 India is an attractive but not an easy market and there will be losses and casualties in the coming years, said the Rothschild report titled ‘India 2030—An Automotive Powerhouse’.

According to Sehgal, market leader Maruti Suzuki India Ltd is set to further lose market share and margins in this period as competition will intensify. Maruti’s market share has whittled down from 82% in 1997 to 39.5% in the first half of the current fiscal.

With rival car makers pricing models at a premium compared with Maruti, Sehgal expects Maruti’s share of gross profit to shrink to 16% in 2015 from 24% in 2010.

Its market share is also likely to drop to 27% in the same period.

With the Chinese market reaching a sizeable scale for global auto firms such as Volkswagen, General Motor Corp. and Toyota Motor Corp., India is the only market to be tapped, making it difficult for firms such as Maruti to maintain margins and market share, the report said.

“Suzuki Motor Corp. has been taking a beating from rival car makers like Volkswagen AG in all the major markets of the world," Sehgal said. “There’s no reason why India should be different."

To be able to maintain its current market share in 2020, Maruti needs to invest $12 billion; this is three times the investment made by the firm since the 1980s and is equivalent to building 12 new plants and increasing annual production capacity by three million vehicles.

Rothschild is bullish in its outlook for the Indian automotive industry and predicts a flurry of mergers and acquisitions in the coming decade. This will primarily be in the commercial vehicle and two-wheeler sectors, it said. The firm expects auto companies to make large acquisitions to access markets and gain technical wherewithal.