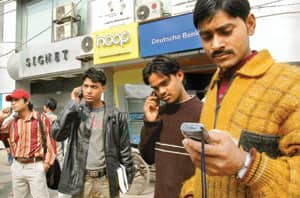 Network choke: Trai, in a report on congestion during April-June, said Bharti Airtel had some 56 so-called PoIs with congestion. Photograph: Sondeep Shankar / Bloomberg

The networks of Vodafone Essar Ltd and Idea Cellular Ltd with some 19 PoIs each ranked next, said the report.

The regulator said that the benchmark notified by the authority in the quality of service regulations in June 2005 for such congestion was less than 0.5%. “This means out of 200 calls between two (telecom) operators only one call should face congestion problem," it said in a statement. It was not immediately clear how badly congested the PoIs were beyond this threshold.

The areas most affected by congested PoIs were Bihar, Maharashtra, Gujarat, Haryana, the North-East and Himachal Pradesh.

The period under review, when the number of Indian mobile phone customers increased to some 287 million in June from about 261 million in March, showed an overall lowering of the congested interconnect points. “The number of PoIs having congestion has decreased from 275 in March 2008 to 156 in June 2008."

Bharti Airtel, in an emailed statement, said the reduction in congested PoIs between March and June reflected the efforts made by it and other companies.

The number of congested PoIs between mobile phone service providers and government-owned Bharat Sanchar Nigam Ltd, which runs India’s biggest fixed line phone services business, and Mahanagar Telephone Nigam Ltd, the state-run phone firm came down to 94 in June from 118 in March, Trai said. Congestion of PoIs among private mobile phone firms, too, decreased from 157 in March to 62 in June, the regulator added.

The telecom regulator said notices issued to six phone service providers for not meeting quality of service benchmarks related to PoI congestion are pending before the Telecom Disputes Settlement Appellate Tribunal since March 2006.