Maruti sold 71,000 cars, vans and sport utility vehicles (SUVs) in September from 67,448 a year ago, the New Delhi-based unit of Suzuki Motor Corp. said in a statement on Wednesday. Sales of SX4 and Dzire sedans grew 52% in the month to 7,413 units. 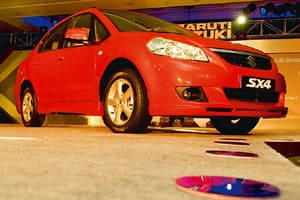 “Companies are sending stock to the dealers’ end ahead of the festivals," said Mayur Milak, a Mumbai-based analyst at Alchemy Share and Stock Brokers Pvt. Ltd. “But many people are postponing purchases as interest rates have gone up from 14.5% to 15%."

More than half the vehicles sold in the country are bought on credit.

M&M sold 25,427 cars, SUVs, trucks and three-wheeled vehicles last month in India and overseas, compared with 19,895 a year earlier, according to a statement posted on its website on Wednesday. Exports fell 27% to 946 units.

“Our sales can’t be less than 100,000 a month," spokesman Bharatendu Kabi said by phone. CNBC-TV18 had earlier reported that New Delhi-based Hero Honda sold 94,181 vehicles in September, without saying where it got the information.

TVS Motor Co. Ltd, the third biggest motorcycle maker in the country, said it posted a 19% growth in September two-wheeler sales, helped by an increase in sales across all models.