In the first investment from its new, second fund, it has deployed about ₹ 100 crore in a residential project in Mumbai, said chief executive and managing director of ASK Property Investment, Amit Bhagat. 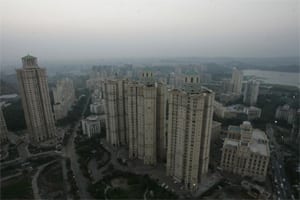 The Paranjape Schemes investment is from its first domestic fund, which was raised in 2009. Six investments have been made from the fund earlier and this would be the third in Pune.

The investment is also unique for ASK because it’s being marketed as a signature, luxury project, a space the fund typically doesn’t invest in.

Bhagat didn’t disclose details of the Mumbai project citing confidentiality clauses, and said the second fund from which this deal has been closed has already raised ₹ crore so far, and will continue to raise another ₹ 300 crore of capital through a greenshoe option, which allows it to retain demand overflow.

ASK, in a recent report on the Pune real estate market, said property prices are expected to remain firm with an upward bias in growth corridors.

Shrikant Paranjape, chairman of Paranjape Schemes, said the Pune project is one of the few developments in the heart of the city. The partnership with ASK will improve agility, he said.

Realty-focused funds have been in investment mode for the past one year and are likely to continue that way, with almost every developer tapping both PE fund and non-banking financial companies to raise capital for a host of reasons including land payments, debt repayment and even project development, said property analysts.

Real estate funds in India, both veterans and new fund entrants, are trying to raise around $4-5 billion of capital from both domestic and offshore markets, of which a larger chunk would belong to overseas capital.

ASK Property is also raising its first offshore fund, which will be in the range of $250-300 million, said Bhagat. The new fund will largely look at investors in South-East Asia, West Asia and Africa.

“The focus and strategy of our investments would, however, continue to be the same," he said.

Overseas fund-raising in the current scenario will be tougher than before because the overall perception is that Indian funds have not performed well though it’s a bit premature to say if they have been unable to generate good returns for investors, said Ambar Maheshwari, managing director, corporate finance, at property consultancy Jones Lang LaSalle.

“Raising domestic money should be comparatively easier but only (for) funds that have a good track record and have demonstrated good returns in the past," he said.