Tokyo: Canon Inc on Tuesday became the first major Japanese firm to cut its annual outlook due to Thai flooding and the strong yen, two problems that are clouding the outlook for many of its rivals ahead of the lucrative year-end shopping season.

Thailand has become a major manufacturing base for Japan’s high-tech sector, with rivals like Sony Corp and Nikon Corp both forced to close plants. The auto sector has also been hit hard by the parts shortage and PC makers are facing a shortage of hard disk drives.

Canon, which competes with Xerox in printers and Nikon in cameras, said the Thai disaster would likely cut annual sales by ¥50 billion ($657 million) and operating profit by ¥20 billion for the financial year to the end of December 2011. 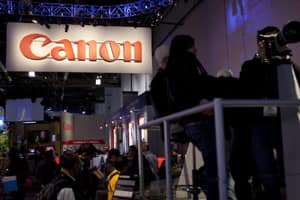 The new forecast is below market expectations of a ¥383 billion profit, based on 20 analysts surveyed by Thomson Reuters

The cut in the forecast bodes ill for Canon’s rivals due to report earnings in the coming weeks.

Nikon has been hit even harder by the flooding and its factory at Ayutthaya, where it makes most of its interchangeable lens cameras, has been closed since 6 October. Nikon is due to announce earnings on 4 November.

Sony, which has delayed camera launches because of the floods, will report quarterly earnings on 2 November.

One fund manager said the market would likely be reassured by the relatively minor effect of the disaster on Canon.

“I think there will be relief," said Shigeo Sugawara, a senior investment manager at Sompo Japan NipponKoa Asset Management. “I don’t think shares will fall on this. In fact, Sony and Nikon are worse affected by the Thai problem, so there will likely be an opportunity for Canon to grab more market share in the pre-Christmas season."

He added that the company’s estimates were generally conservative and that an upward revision could come later.

Shares in Canon, the world’s biggest maker of digital cameras ahead of Sony, closed down 1.8% at ¥3,490 on Tuesday. Canon shares have fallen 3.6% since 1 April, compared with a 10% fall in the Nikkei average.

The maker of EOS and IXY cameras said camera parts suppliers had been flooded in Thailand and that while it was trying to obtain parts from other suppliers, year-end sales were bound to be affected.

Canon has also been forced to close an inkjet printer plant in Thailand, but expects to make up some production at other factories.

In the July-September quarter, Canon earned an operating profit of ¥122.5 billion, compared with ¥104.4 billion in the same period the previous year and beating a market consensus of ¥107 billion based on seven analysts polled.

The company said it was assuming exchange rates of ¥77 to the dollar and ¥105 to the euro for the October-December period.

The yen is the best performing currency among the world’s most liquid currencies and has risen nearly 7% so far this year.