Sunil Bharti Mittal has pledged 10% of his family's wealth to Bharti Foundation, a large part of which will be used to set up the Satya Bharti University which aims to provide free science and technology education to poor students

New Delhi: Billionaire Sunil Bharti Mittal has pledged 10% of his family’s wealth, amounting to Rs7,000 crore, to the Bharti Foundation, a large part of which will be used to set up the Satya Bharti University, which seeks to offer free science and technology education to the poor.

“We aim to focus on education in our philanthropic ventures, though from time to time we may look at other initiatives like Nyaya Bharti (aid for undertrials) and Satya Bharti Abhiyan (sanitation drive) but on a smaller scale," Mittal said in an interview on Thursday. 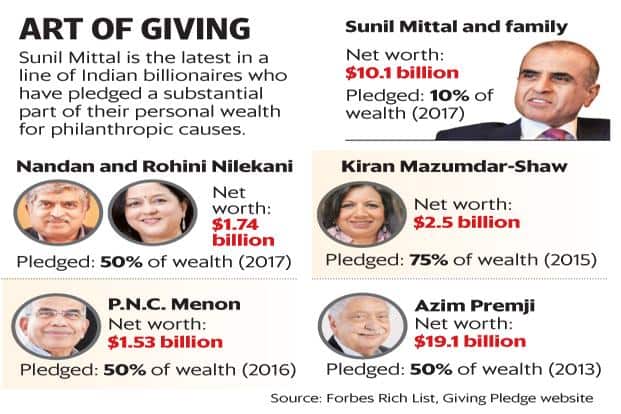 Mittal, 60, is the latest among India’s top billionaires to dedicate a substantial part of his wealth to philanthropic causes. On 19 November, Infosys Ltd chairman Nandan Nilekani and wife Rohini pledged at least half their wealth to charity, the fourth among Indians to sign up for the Giving Pledge initiative of Microsoft Corp. founder Bill Gates and Berkshire Hathaway Inc. chairman Warren Buffett.

“Two big giving announcements in a week shows that Indian philanthropy is moving beyond capital and is getting more catalytic. In the case of the Mittal family, it shows that they are becoming more engaged with strategic, focused thinking about philanthropy," says Deval Sanghavi, co-founder of Dasra, a strategic philanthropy advisory.

The Satya Bharti University, to be set up in north India with a capacity to enrol 10,000 students, hopes to attract academics from across the world. “We are looking for about 100 acres somewhere close to Delhi or Chandigarh for it is tough to attract talented academics if campuses are set in extreme rural settings," Mittal said. It will provide free education to children from underprivileged and economically weaker sections of society.

Mittal acknowledged that it would be difficult to find 10,000 academically bright students from these sections and said that while he would like student admissions to focus on supporting deserving students, around 60% of the students to begin with will be those who can afford this education.

“When we started the primary school programme, we realized that the students had nowhere to go for secondary education. Then we got into that. Similarly, coming out of secondary school, such children need university education and they don’t have the money to get it. They need a place which we will provide," he said.

The Bharti Airtel chairman also indicated that now that they have plans to set up this university, they will look at recalibrating the Satya Bharti School programme to include more STEM (science, technology, engineering and mathematics) education. “This step is an evolution for us. It will force us to think about improving our primary and secondary programmes to provide quality education for deserving children so that they can qualify for higher education," he said.

Mittal said he hoped that at least 1,000 students in the first few batches will come from the foundation’s Satya Bharti schools.

With construction of the university set to start next year, phase one of the academic session is expected to begin in 2021. By 2023, the university is expected to be fully operational. Mittal said that close to Rs1,000 crore from the total funds committed will be spent on hard and soft infrastructure for the university, and around Rs4,000 crore will be held in a corpus for managing the university’s running expenses. For admissions, Class 12 results—with a special focus on marks in science and maths—are likely to be the benchmark and there will be no entrance examination.

The Satya Bharti University for Science and Technology will have a strong focus on cutting-edge technologies such as artificial intelligence, robotics, augmented reality/virtual reality and the Internet of Things, in addition to offering degrees in electrical and electronics engineering and management.

Mittal said that the university will be a non-profit centre of excellence and will also promote and fund advanced research with global linkages. It intends to add industry partners such as Facebook Inc., Google, Apple Inc., Microsoft Corp. and SoftBank Group Corp.