Bangalore: Babajob.com, a website that helps users find drivers, cooks and guards, recently made its service available through mobile phone text messages. After the start-up developed and tested the application, cellphone operator Idea Cellular Ltd launched the service for its subscribers in Andhra Pradesh in March, giving the portal a ready market. 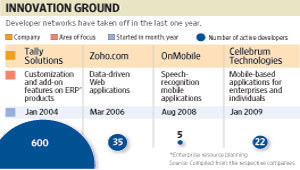 Many technology firms globally run developer forums that invite geeks to fiddle with their products, encouraging innovation around these. The applications thus developed add to the uses of the products.

“Start-ups are usually strapped for resources and direction. Developer networks like that of OnMobile’s really help us in having a relationship with cellular operators and tell us the need of the marketplace," says Vir Kashyap, chief operating officer at the Bangalore-based Babajob Services Pvt. Ltd. “If it weren’t for OnMobile’s developer network, we would have taken double the time to launch this service."

A start-up typically takes 9-12 months to develop a mobile-based application and take it live.

Multinational firms such as Microsoft Corp., Yahoo Inc., Intel Corp., Nokia Oyj and Apple Inc. have had developer forums for years. Intel, for instance, started its developer forum in 1997 and hosts two meetings every year where developers gather to discuss Intel products and applications that can be built around them.

Bangalore-based Tally Solutions Pvt. Ltd, a maker of accounting software, hosts India’s oldest and largest network, with about 600 active developers. Zoho Corp., which runs Zoho.com, started its forum in 2006 and has about 35 developers so far.

The concept has gained momentum in the past year, with OnMobile and Cellebrum Technologies Ltd starting developer networks and some others such as Chennai-based Ramco Systems Ltd working on the fine print, which typically revolves around licensing and revenue-sharing.

“We help the developers fine-tune the idea, refine the product offering, do joint testing, pilot in a localized area and, finally, sell it to the operator," says Abhinav Mathur, chief strategic and technology officer at Noida-based Cellebrum. The firm has worked with some 22 companies to develop several applications for enterprises as well as voice recognition-based applications.

Revenue-sharing, though, is a touchy issue in India. Network operators claim a 60-80% of the revenue earned in return for hosting the products of mobile value-added services firms, much higher than the 20-30% share operators earn in markets such as Japan and Korea.

As for application developers globally, firms such as Apple take a 30% cut for giving developers access to the App Store.

OnMobile started its developer network in August 2008. It selected five companies, gave them software development kits and asked them to work on mobile-based voice recognition applications to cater to India’s rural audience. OnMobile hand-held the companies through the ideation stage. Once ready, OnMobile will test the applications and sell them to cellular operators.

“These applications are very region-specific. What you offer to farmers in Punjab may not be relevant to farmers in Tamil Nadu. So, we came up with the concept of a developer forum," says Pratapa Bernard, head, marketing and products, OnMobile. “We don’t know what applications Kanpur needs."

Of the five firms in OnMobile’s network, two are in Bangalore, two in Delhi and one in Kanpur. Each has four-five employees.

The Kanpur firm—Bernard declined to name any of the companies in the network—has developed a mobile version of Anthakshari, a popular Indian music game. OnMobile plans to launch the game in July on Idea Cellular’s network.