Bangalore: Vinay Kumar Y.H., 26, a technical associate at Tech Mahindra Ltd’s embedded mobility division in Bangalore, spends 2 hours a week developing a cellphone application that would analyse the stress levels of users from their voices.

The application, on which Kumar has been working since June, is one of the earliest ideas posted on Mahindra and Mahindra group’s intranet-based innovation pad that was launched in May. The platform cuts across the group’s 104 companies and at least 100,000 employees. 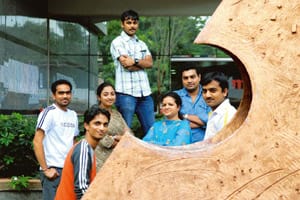 Idea factory: A group of Tech Mahindra employees that uses the innovation platform. Like Google, the Mahindra and Mahindra group is giving its employees some time off from work to come up with new ideas. Hemant Mishra / Mint

“The idea is to bring people together and share the vast pool of knowledge," says Rajeev Dubey, president, human resources, after-market and corporate services, and member of the group management board of Mahindra and Mahindra Ltd, India’s largest maker of tractors and utility vehicles. “While innovation is a constant mantra, the group companies are fairly diverse and the rate of change is very fast."

It’s certainly not a new concept—Google Inc.’s employees can take a day a week to work on their ideas—but is progressive for an Indian business that started 64 years ago as an old-economy company assembling jeeps. With this new thrust, the Mahindra group hopes to cross-fertilize ideas, innovate faster and bridge the digital divide.

Kumar’s idea—for a subset of the innovation pad called ideation factory that’s focused on mobile value-added services—is being considered for patenting and commercialization. The electronics engineer is also drawing up a business plan around the idea.

“If somebody gets really stressed, the pace (of the voice) gets fasters and the tone gets higher... I’m examining what all parameters can be recorded," says Kumar. “Once I put up my three-line concept (on the intranet), lots of people started responding."

His application is currently undergoing a stress test of sorts itself—a multi-stage whetting process, first by peers on the intranet and then by a panel of judges including directors from group companies CanvasM Technologies Ltd, a mobile value-added services firm, and Tech Mahindra, a software services provider.

The group’s innovation pad invites ideas in at least a dozen areas, from automobiles, computers, consumer electronics and health to cost reduction. The ideas range from new methods for cellphone payments and personalizing car adjustments to mechanisms that would make mobile applications inter-operable across cellphone operating systems.

Mahindra and Mahindra started as a jeep assembling company in 1945 and has over the years branched out into tractors, commercial vehicles, information technology, holiday resorts, financial services, making sports utility vehicles and passenger cars.

Even the group’s older employees are open to new age, collaborative, Web 2.0 technologies aimed at internal crowd sourcing, says Arvind Tawde, senior vice-president and chief information officer at Mahindra and Mahindra. “If at all there is a digital divide, it will get reduced."

Crowd sourcing is when a task is taken to the public to tap into a larger source of knowledge. Wikipedia is one example.

The Mahindra group’s innovation platform has not yet set a target or worked a revenue-share arrangement with employees. Its ideation factory aims to be India’s answer to Apple Inc.’s hugely successful application platform, App Store, arching for at least a 1,000 ideas in two-three years, says Prabha Aithal, chief technology officer at CanvasM, who drives the ideation factory and holds three patents in mobile technologies from his stint in AT&T Mobility Llc., the wireless subsidiary of AT&T Inc.

The world’s No.1 Internet search firm, Google, has greatly benefited from fostering innovation. Its engineers are free to work on ideas for a day a week, which has given birth to social-networking platform Orkut.com and Google Suggest, a feature that prompts you as you type in its search box.

At Mahindra, many of the 90 ideas generated so far at the ideation factory have come from younger employees with one-two years of experience, says Aithal.