Three months after airline industry-wide consolidation started taking hold and fares began moving up, load factors, or the number of people flown per flight, are dipping in India, with the steepest fall reported by the country’s largest low-fare airline Air Deccan. 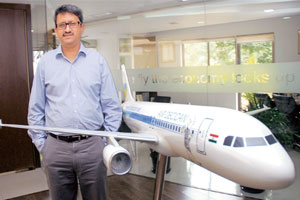 Hope floats: A file picture of Air Deccan’s acting chief executive officer Ramki Sundaram. He says he is hopeful that the figures would change in November and December.

“What it is telling you is that actually those one million seats at Re1 and (free tickets) being offered are gone. And now that they have gone—the loads have got adjusted," says a Mumbai aviation analyst who didn’t want to be identified because he is not allowed to be named by the media.

The weak load factors was felt elsewhere in the industry too, though on a much smaller scale.

Other low-fare airlines, such as SpiceJet, saw its load factor come down by nearly 5%, with IndiGo losing 1%. GoAir was the only low-fare airline to increase its share, by 2% over January.

The data comes from aviation regulator, the Directorate General of Civil Aviation.

As of August, Jet Airways Ltd, together with its budget carrier JetLite, was the country’s largest group by passengers flown with a 29.3% market share followed by Kingfisher Airlines and Air Deccan combined at 28.6%. Indian Airlines had a 19.8% share of the market, with the rest shared among four other carriers. Air Deccan’s acting chief executive officer Ramki Sundaram said he was hopeful that the results would change in November and December—as more people travel—considered as the best season for India’s airlines.

The near-12% drop in Air Deccan’s load factor, Sundaram said, was due to a combination of reasons including raised fares. “We were changing a bit on the revenue management side," he conceded. “We moved into a different (booking) system. In June and July we added new capacity." In the period around August last year, he said, the load factor was in the “late 60s, early 70s."

Until June, Air Deccan, which has 350 daily flights across 65 locations, was offering the lowest fares in the industry on a majority of the routes it operated. Sometimes, these fares were as low as Re1, plus some Rs1,000 in taxes and surcharges, often tempting upper-class railway passengers to switch to a flight.

But, since June, after United Breweries (Holdings) Ltd, which operates Kingfisher, took a controlling stake in Deccan Aviation, the carrier has started raising fares, in some cases as much as 8-10%. This month, when the airline announced tickets at “special festive fares," the Re1 tickets were noticeably missing.

Fewer free tickets and higher fares, however, may be turning away some passengers in smaller Indian cities and towns, said another analyst. Still, this is unlikely to change overall flying habits drastically, as 70% of the current traffic comes from the country’s large metros.

Mark Martin, an aviation analyst with KPMG International, noted that, in the past eight months, an additional eight million more passengers flew domestically—when compared with the same period last year that saw about 20.61 million people flying in India.

This, he said, was proof that consumers are not going back to the railways. “If everyone is increasing fares then you (the consumer) live with it," Martin said.