The regulatory glare on auditors is increasing. The ripple effects are being felt across the Indian business ecosystem

Mumbai: How many companies or their managements are still riding a tiger they can’t get off? That’s a question that should worry investors, and their reaction to auditor resignations in recent months shows that it does. To jog some memories, ‘riding a tiger’ is how B. Ramalinga Raju described his state when, as promoter and chairman of Satyam Computer Services Ltd, he confessed that the company’s books had been cooked for several years. An investigation by the Securities and Exchange Board of India (Sebi) reported Satyam’s cash and bank balances were overstated for all the years between 2001 and 2008. The amount on its books that did not exist was ₹ 5,040crore.

All this happened right under the nose of Satyam’s statutory auditor since 1 April 2000, Price Waterhouse, Chartered Accountants. Nearly a decade later, for an investor, it does not seem like much has changed.

Take last week’s incident, when Jet Airways (India) Ltd decided to defer its June quarter results, because the management needed time for closure of pending matters. Its shares fell by 8.4% on Friday, 10 August, after the announcement. 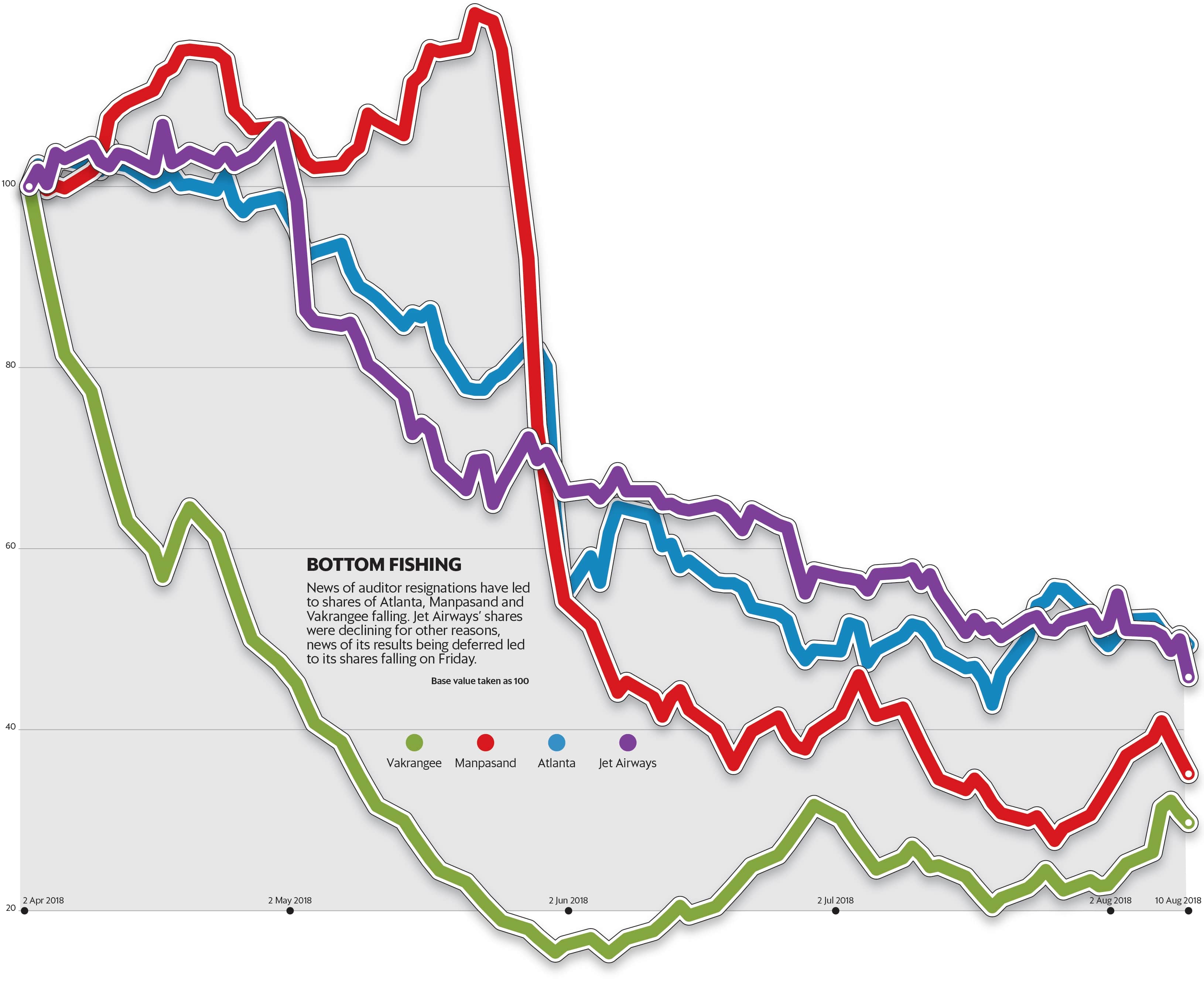 In this case, the auditors had not resigned. Still, deferring reasons at the last minute without specifying a reason seems to have spooked investors. Any untoward development related to a company’s financial statements has become a red flag for investors.

Auditors are leaving their assignments in fairly large numbers, with The Indian Express reporting that external auditors in 204 listed companies left their posts between 1 January and 17 July, with reasons including lack of information, inconsistencies in financials and health concerns.

In April and May, three companies—Vakrangee Ltd, Manpasand Beverages Ltd and Atlanta Ltd—said that their auditors had resigned before completing their audit of the annual financial statements. The main reason was the auditors did not get enough information to complete their audits. Their shares dropped off the cliff, as the news spread panic among investors.

Also read: Why auditors are under scrutiny from regulators and investors, globally

Since the auditors were not forthcoming about the specific reasons for resigning mid-way, and reassurances from the company management were unconvincing, shares plunged. In the following weeks, more auditors resigned, but the reasons became mundane, such as personal reasons or for preoccupation with other work. Even in those cases, shares of companies fell. The government has ordered probe into some of these resignations, to understand if there are specific concerns that auditors had that needs following up. If those investigations lead to something substantive, then some purpose could be served by these resignations. Otherwise, they will be taken as a sign of auditor discomfort in continuing with the assignment.

Investors have a single-minded focus, which is to grow their wealth. A do-it-yourself investor would typically use the financial statements as a central pillar around which the investment case is built. The financial statements are prepared by the management to be presented to the shareholders and regulatory authorities. The auditor’s signature on those accounts gives the investor confidence that these numbers can be relied upon. When that confidence is shattered, or even a shadow of doubt emerges, all hell breaks loose.

But is investor memory short? Consider the same three companies mentioned above. All three companies have seen their shares move up sharply in recent weeks. How should one read this? If the shares fell in the first place because auditor resignations caused concern, why are investors coming back? Maybe, the sharp fall in prices meant that the risk was priced in. But, if at a certain price, investors are willing to ignore even serious concerns about financials, what message are they sending? It may embolden company managements to carry on as usual, knowing investors will come back. Do investors really care about corporate governance, or more about knowing that all the risks are fairly priced in?

Trust in financials is an important ingredient to build trust in Indian companies among the investor community. The debate on why investors are willing to ignore auditor resignations now should take place, but it is also a fact that investors, holding shares before these resignations became public, have lost a lot of money. A collection of such events can not only harm returns to investors but also hurt India’s reputation. Auditors have a key role to play in protecting and enhancing this reputation.

Take the massive problem around the huge build-up of non-performing assets (NPAs) in Indian banks. While the management of banks and the borrowers do take a lion’s share of the blame, auditors have not covered themselves in glory either. Wide divergences were reported in the estimates of bad loans in the audited financials of banks, compared with that found when the Reserve Bank of India audited these banks. This meant that the reported net profits for the period where the divergence was found should have been lower.

The divergences in NPAs as of 31 March 2017 were more than ₹ 60,000 crore, compared with ₹ 43,000 crore a year ago, according to a Mint report quoting rating agency ICRA’s estimates. Then, there are the cases of banking fraud, which appear to have missed the statutory auditors’ gaze altogether.

More instances of companies playing fast and loose with their financials have come up since Satyam. Many are linked to the bank NPA pile-up, with banks alleging that the money has been siphoned off or diverted by the promoters. In some cases, banks have asked for forensic audits to be done, to ascertain the true status of financials and also to trace where the money went.

In some cases, Sebi has launched investigation into the auditors. Apart from Satyam, Parekh Aluminex Ltd and Arvind Remedies Ltd are examples of cases where Sebi has issued show-cause notices to the statutory auditors. The Quality Review Board, established under the Chartered Accountants Act, 1949, is tasked with assessing the quality of audits. Its 2017-18 report says that of the 395 audits, whose reviews were finalized, 38.7% were closed as they were acceptable; in 54%, the board issued advisories to improve quality of services and, in the remaining 7.3%, it recommended to the The Institute of Chartered Accountants of India to take action.

A student of accounting may come across this phrase of an auditor being a watchdog and not a bloodhound. What this means is, while conducting an audit, if the auditor comes across something suspicious, the auditor will point it out. But the auditor’s role is not to come in looking for fraud. In fact, auditors rely on the management to provide them with information and clarifications in the course of an audit. They are not supposed to mistrust the senior management, unless they have good reasons to do so.

The regulatory glare on auditors is increasing and moves are afoot for greater oversight, on multiple fronts. The government has taken cabinet approval to set up a National Financial Reporting Authority, which will take over several critical roles pertaining to the accounting and auditing function. It will frame accounting/auditing standards and policies, monitor and enforce them, oversee quality of the audit profession and investigate and order action against professional misconduct. It will have powers to act both against the individual and the auditing firm.

But that’s not all. Sebi has mandated that when companies appoint an auditor, they will need to inform the basis on which the auditor was selected and the fees payable. If the fees are higher than the outgoing auditor’s fees, then the reasons have to be mentioned. If an auditor resigns, then detailed reasons have to be given. While the government may be tightening the screws on auditors, inexplicably, it has relaxed one provision—where shareholders had to annually ratify the auditor’s appointment, even if the tenure was for five years. Why this was done is not clear, and 84 out of the 161 firms that held annual general meetings between 1 May and 15 July did not seek ratification. If this had been retained, it would have put that extra pressure on auditors.

Meanwhile, Sebi has issued a consultation paper on regulating fiduciaries such as chartered accountants, citing the recommendation of the Committee on Corporate Governance headed by Uday Kotak. The recommendation says that Sebi should have the powers to act against the auditors of listed entities and can take action under the securities law. While Sebi has acted in cases such as Satyam, it has had to face challenges to its authority to do so. These regulations will give it powers to act if it comes across negligence or fraud by auditors.

The Reserve Bank of India, too, appears to have realized the need for direct intervention in the audit of banks. It has decided to implement an enforcement framework, allowing it to take action if lapses in statutory audit are observed. It has listed five different heads under which lapses will be considered, which include misstatement in financial statements. RBI would conduct an enquiry and, depending on the severity, it can bar a firm from conducting statutory audit of banks. RBI has also retained the right to take action based on enforcement actions conducted by other regulators.

The Kotak committee has made certain other recommendations, such as allowing auditors to seek an external opinion on issues such as valuation but at the cost of the firm. Also, it has proposed that a company should disclose total fees paid to the auditor and network firms. This is to ensure that shareholders are made aware of any non-audit fees—such as for valuation or consultancy—paid to the other arms of the group to which the audit firm belongs to. This will improve transparency.

In conclusion, the coming years will see independent auditors more tightly regulated and under greater scrutiny. How serious the regulators are about pulling up auditors when they slip up will be watched for. An overall climate of scrutiny may feel stifling for auditors but if that leads to better audit quality and more investor confidence in the financial statements of companies, then it may be worth it. A decade from now, investors should be able to say much has changed for the better since Satyam.