That the government will try and sell Air India in 2018 is, more or less, a foregone conclusion. Whether it will be able to remains the question. And the answer to that will mostly hinge on how the sale of India’s beleaguered state-run airline is packaged: whether, and how much, the bad pieces of Air India are saddled with its good pieces. This first real attempt to fix Air India for good will be watched as much for its commercial implications as for the ability of the Indian government to push through its most ambitious divestment ever.

On a recovery path In the past five years, Air India has been on a flight to recovery, thanks to a government bailout, lower fuel prices and the Indian market registering strong passenger growth. As of March 2017, Air India’s debt stood at Rs48,877 crore: Rs31,517 crore of working capital loans and Rs17,360 crore of aircraft loans. As a result, its financials are awash in red. But at an operational level, its routes are doing much better in terms of cost recovery, and private entities will fancy making them more cost-efficient. For any buyer, debt will be an issue, and the government will probably only bundle part of the debt in the sale package. 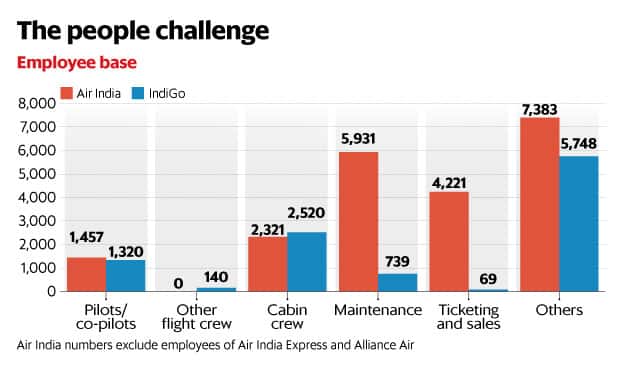 Any buyer will have to deal with Air India’s complexities and flab. For example, as of March 2016, Air India had 101 planes, while IndiGo had 94; but while the entire IndiGo fleet was of one type, Air India’s had 10 type of aircraft across two manufacturers. Plus, it had twice the number of employees. Even subtracting the 6,000-odd employees in its maintenance arm, Air India has a significantly higher employee base and its assets are sweating a lot less. Ultimately, what the government offers will determine how buyers respond.