Toyota to start Etios, Liva production in Brazil by 2013

Toyota to start Etios, Liva production in Brazil by 2013

New Delhi: Japanese auto giant Toyota Motor Corporation will start production of its sedan Etios and hatchback Liva -- the two models that were first launched in India -- in Brazil from 2013.

“We are going to start the first production outside India from next year. It will be for the Latin American nation and the production base would be Brazil," Toyota Motor Asia Pacific president Hiroji Onishi said at the 11th Auto Expo in New Delhi. 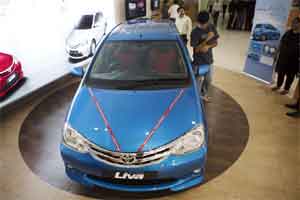 “Before going for production outside India, we will start exporting Etios and Liva to South Africa from March this year. We would like to go overseas for establishing the products," Onishi said.

The company on Friday announced starting its first motor race in India in 2013.

Before the final race, the company will conduct preliminary round for short-listing the drivers at 12 locations in 13 cities across the country.

Talking about its plan to bring in Toyota International Motor Races to India, Onishi said first we would to generate interest among Indian customers and then future development will come.