Mumbai: Current and former employees are the biggest perpetrators of frauds in Indian firms, followed by agents and intermediaries, found a survey by Kroll advisory services.

The findings, presented in its global fraud and risk report 2016-17, are based on the survey of senior executives in a wide variety of sectors and functions. The report has analysed three types of risks—fraud, cybersecurity and security.

Nearly 80% of the respondents cited middle-level management, junior employees, former employees or freelancers as key culprits of frauds. While insiders are cited as the main culprits, they are also most likely to discover it. 44% of the respondents said that recent fraud has been discovered through the whistle-blowing system. 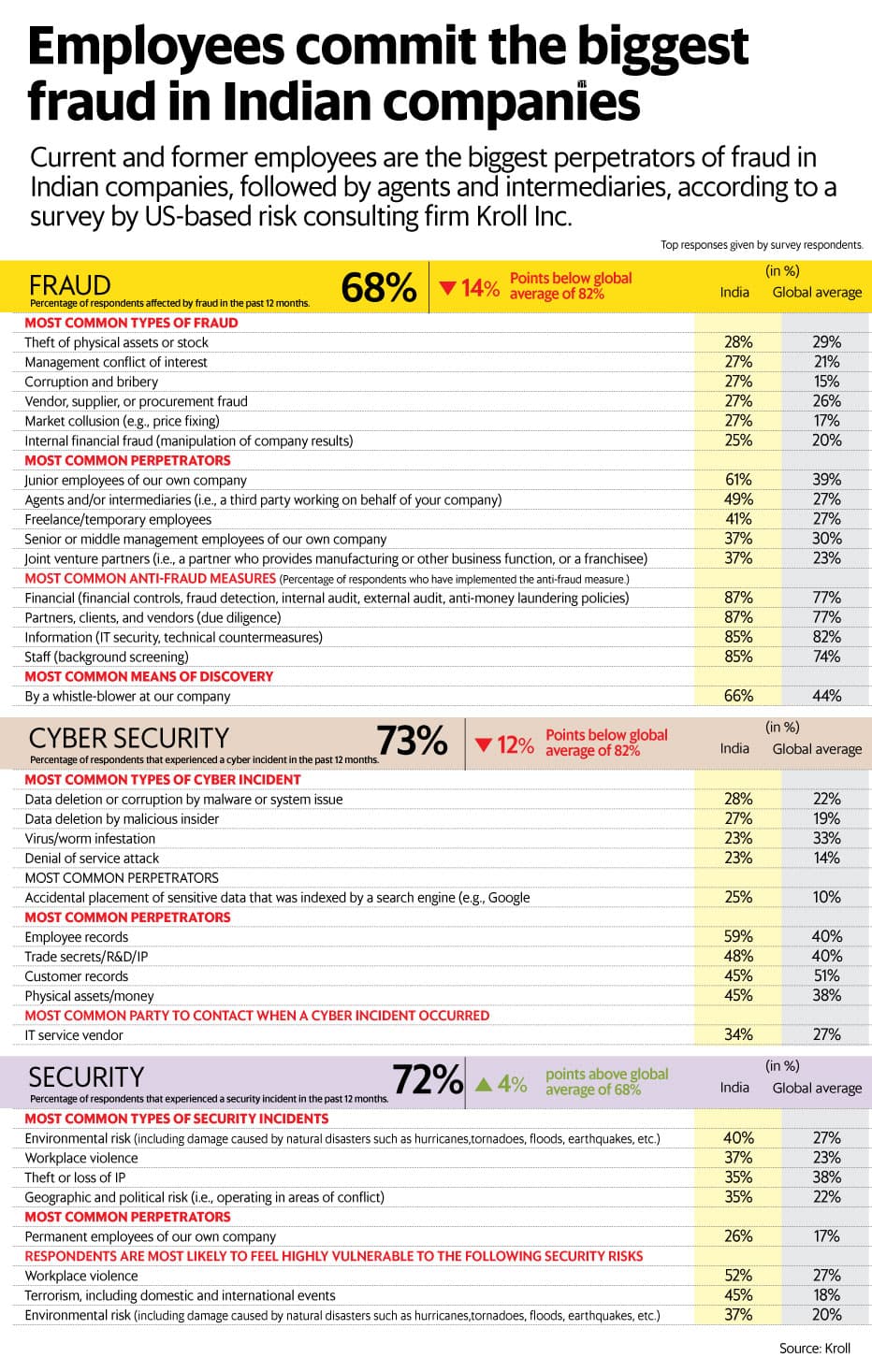 The report indicated that any type of risk has widespread repercussion for a company’s employees and customers. Respondents claimed significant economic damage from fraud as 57% of executives estimated fraud-related losses between 1% and 3% of the revenue.

China and India topped the charts among the countries where organisations were dissuaded from operating because of concerns of fraud and security.

Nineteen per cent of respondents said that they will not operate in India due to fraud concerns and 16% said they will not operate in the country due to security concerns. “The statistics reveal the contradiction in the Indian economy. On the one hand, India is an attractive destination of foreign investors… and on the other hand, investors are deterred due to fraud, corruption and security concerns," said Reshmi Khurana, managing director and head of south Asia, Kroll.

In India, the percentage of respondents affected by fraud reduced to 68% in 2016, down from 80% in 2015, marking a 12% decrease. However, when all participants of the survey were asked whether they had been dissuaded from operating in a particular jurisdiction because of fraud concerns, notably 19% of the respondents stated they were dissuaded from operating in India, which was the second most mentioned jurisdiction after China (25%).

While 78% of the respondents in India believe that exposure to fraud has increased, the figure is the lowest among all other countries surveyed.

Respondents reported experiencing more of every type of fraud than what was cited in the earlier year. Theft of physical assets remained the most prevalent type of fraud, reported by 29% of the respondents.

Among cyber incidents, one-third of respondents said that they have been hit by viral infestation followed by phishing attack and loss of intellectual property was the most common type of security incident.

Facing high levels of business risk, companies have adopted various measures of risk mitigation. Among anti-fraud measures, focus on information such as IT security is the most prevalent. For cyber security and security risk mitigation measures, in-house security assessment of data and developing securities policy and measures, respectively, were most widely used.