Reliance Industries's total debt has tripled in the past five years as it borrowed to fuel more than 3.3 trillion of spending on a new telecom venture and its traditional petrochemicals business

Mumbai: Reliance Industries Ltd, India’s second-largest company by market value, plans to raise about ₹ 40,000 crore in fresh debt this financial year as it expands its consumer businesses, according to people familiar with the matter.

The billionaire Mukesh Ambani-led company will raise funds through loans and bonds, mostly in the Indian currency, the people said asking not to be named as they are not authorized to speak to the media. Of this, the refining-to-retail conglomerate already has shareholder approval to raise as much as ₹ 20,000 crore through non-convertible debentures.

Reliance’s total debt has tripled in the past five years as it borrowed to fuel more than ₹ 3.3 trillion of spending on a new telecom venture and its traditional petrochemicals business. Ambani will invest this year to roll out fiber-based broadband services and on acquisitions, including the purchase of telecom assets from brother Anil’s Reliance Communications Ltd (RCom). The company has total borrowings of about ₹ 2.2 trillion, more than half of which is due to be repaid by 2022, according to data compiled by Bloomberg.

Net liabilities will probably increase this year, mostly due to the RCom transaction, before falling in the financial year ending March 2021 as cash flows improve, said Somshankar Sinha, a Mumbai-based analyst at Jefferies India. “Reliance needs funds to refinance existing long-term debt or replace short-term debt with longer tenors, and to fund its announced acquisitions." 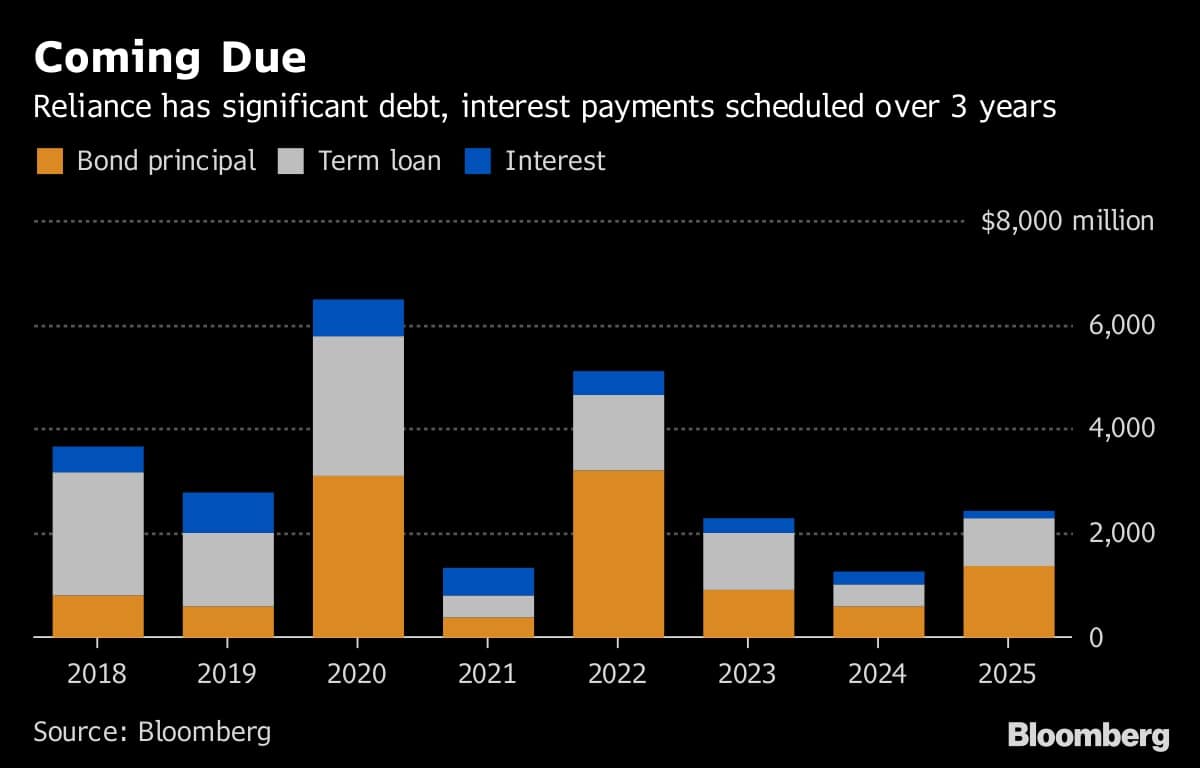 Reliance has agreed to pay about ₹ 17,300 crore to purchase spectrum, mobile-phone towers and fiber assets from RCom and another ₹ 5,000 crore for textile-maker Alok Industries, which it won in an auction under India’s bankruptcy rules.

There are investments planned for the fiber-based broadband services, JioGigaFiber, that will launch across 1,100 cities in August under the umbrella of telecom unit Reliance Jio Infocomm Ltd., the people said. In addition, the conglomerate will spend on acquiring apparel brands and opening new retail outlets, one of the people said.

A spokesman for Reliance didn’t respond to an email seeking comment.

Reliance’s better-than-sovereign rating has helped it raise cheaper debt while actively investing cash reserves that reached ₹ 78,100 crore last financial year. Other income accounted for about a fifth of its profit before tax in the 12 months to 31 March—much of it earned by investing the cash. The company has a “BBB+" credit score from S&P Global Ratings, two levels higher than the Indian government.

Reliance returned to the local-currency bond market after a more-than-seven-year absence last year, raising 200 billion rupees via six offerings between August and November. The conglomerate priced some notes maturing in three years or slightly more in the range of 6.78% to 7.07%—lower than the 7.15% average yield on top-rated three-year corporate bonds during the same period.