Mumbai: Tata Group is conducting due diligence of Jet Airways (India) Ltd as the nation’s largest conglomerate explores the purchase of a controlling stake in the cash-strapped airline, two people directly aware of the development said. Saurabh Agarwal, chief financial officer of Tata Sons Ltd, is leading the discussions while Jet Airways is represented by its chairman Naresh Goyal, the people cited above said, asking not to be named as the talks are private.

“An in-house team of Tata Sons is currently conducting due diligence on Jet Airways, which is expected to continue for the next few weeks," said one of the two people cited above. 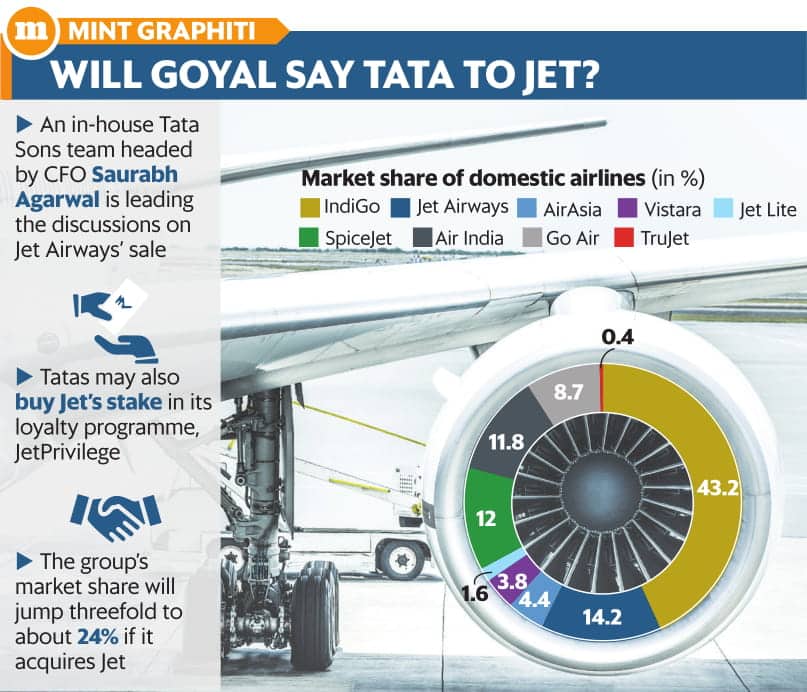 Mint reported on 29 October that Goyal had approached potential investors, including Tata Group, to sell a significant stake in the airline. Tata, while showing initial interest, had made the deal contingent on Goyal relinquishing operational control of the company he founded.

“Things have moved at a fast pace since then and Goyal has in principle agreed to cede control to Tatas, subject to fulfilment of certain conditions," said the second person. “Such a condition includes how much premium the Tata Group is willing to pay for Goyal to give up control and whether he (Goyal) will continue in some capacity if the talks are successful," said the second person.

Spokespeople for both Jet Airways and Tata declined requests for comment.

Jet Airways has said in the past that it is open to infusion of funds from external sources. Fresh funds could result in a change in the airline’s shareholding pattern, where Goyal owns a controlling 51%, Mint reported on 10 October, citing people aware of the matter.

Mint had on 10 October reported that potential investors eyeing a stake in JetPrivilege—private equity (PE) giants Blackstone Group LP and TPG Capital—started having second thoughts due to worries over the airline’s financial health. Both PE firms have offered indicative term sheets valuing Jet Privilege at close to $900 million in their initial bids, while Goyal was reportedly seeking a valuation of over $1 billion.

ALSO READ | Why everyone loves an airline or two

Tata already has a presence in aviation through budget airline AirAsia India Pvt. Ltd and full-service carrier Vistara, a joint venture with Singapore Airlines Ltd. Acquisition of Jet Airways will grow its combined market share about threefold to 24% from 8.2% as of end-September. IndiGo, India’s largest domestic operator run by InterGlobe Aviation Ltd, had a market share of 43.2% as of end-September.